Fairy Tale slot is a 5-reel Endorphina video slot with 3 rows, 20 paylines, and 96% RTP from 2015. Given its release year, the game was only available on Flash, but a re-release on HTML5, which would fit all desktop and mobile devices, is coming soon. Fairy Tale is not a story for kids, though – the gorgeous fairies aren’t the trio from The Sleeping Beauty. Instead, they are very powerful and capable of bringing rewards of up to 1,000x the stake. For a low-variance slot, the payout matches the temperament of the game perfectly.

Once you get the reels spinning, you’ll start noticing diamonds rolling past the grid. These are the Scatters which act as Wilds as well. If you get three of those, you will successfully enter the bonus feature, where you are to free the doves out of confinement. It is important to note that Free Games, i.e., Free Spins, are unlimited. No cap for you here! But you have to put a lot of effort into saving the doves, which prolongs the feature. Finally, as all Endorphina online slots, Fairy Tale online slot features the Risk Game. You can bump up your winnings by 10x if you play your cards right.

The Fairy Tale of the game is a benevolent game with low volatility and 96% RTP. This all suggests tame gameplay, meaning you won’t have to work for wins, but they won’t be as high as you might expect. The release fits low rollers more than those with deep pockets, but it is worth checking if you are into the theme. The betting range is between €0.01 and €200. Our team compiled all the other details about technicalities and features in the Fairy Tale slot review below. Keep reading for more info! 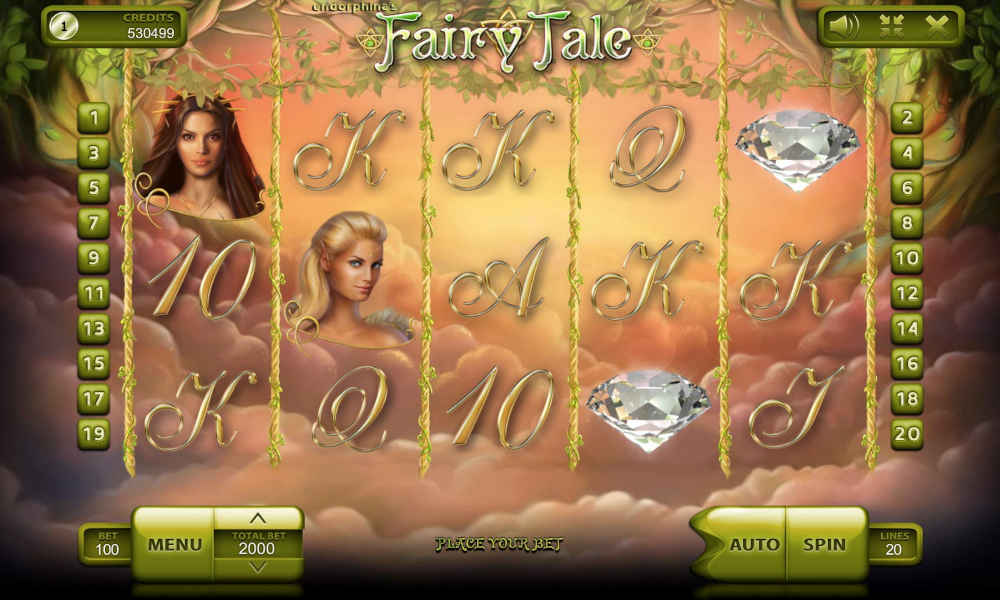 HOW TO PLAY Fairy Tale?

Endorphina considers this one of the finer releases in the fairy theme department, and we must agree. Considering the year it came out, it does not surprise us the Flash-only approach, but everything else is quite modern. For instance, the grid – although it sports a standard 5×3 layout, it is sprinkled with dreamy, magical elements. Of course, it fits its theme perfectly, and impeccable graphics only heighten the feeling of being someplace magical. The symbols help with the immersion, as they are a collection of card royals 10-A and several premiums. Naturally, the three fairies are among the premium icons, the blonde one being the highest-paying icon in the lot. They are joined by a pendant and a Diamond, which acts both as a Wild and a Scatter.

To play the game, you will need at least three identical icons on any of the 20 paylines. Some even pay for two – premiums, mostly. The longest combo you can form for any icon is 5-of-a-kind, which is where the full potential of the blonde fairy starts to shine. The settings below the grid let you explore the game’s possibilities. You can adjust the bet by tinkering with the coin value and the bet level. In the end, you can wager anything between €0.01 and €200, which is common practice for Endorphina slots. The range lets you explore the game while suiting your gaming preferences – you never have to go overboard or worry about bigger wins with such a wagering limit. Another thing that’s helpful in the matter is the flexibility of paylines. They are not fixed, which means you can use as many as you want (up to 20).

The rest of the technical details does not surprise us in the least. The game sports a 96% RTP, which has become a staple of Endorphina. Low variance smooths out the game’s temperament, bringing it to a serene atmosphere filled with dreamy features and elements. You can get up to 1,000x the stake here, so don’t hold back on playing the game as long as you are having fun. Fairy Tale slot is available only on Flash, but we reckon an HTML5 version will join the party soon.

In terms of features, Endorphina did not want to go overboard and install excessive features. Instead, it kept it simple and classy, which is how we’ve gotten only free spins and the risk game.

Fairies and other-worldly creatures are always fun to see and play with. Such themes always attract the audience, and Endorphina knows that well. The Fairy Tale slot is a great example of that, as it is one of the most popular slots in the provider’s catalogue. It came out in 2015 and is only available on Flash for now, but we hope to see a new version soon.

Feature-wise, Fairy Tale uses Free Spins and Wilds to boost the energy and spice up gameplay. You can play unlimited spins if you catch three diamonds – but you have to free doves to reach higher payouts. Free Spins also include multipliers for each liberated dove. There’s a Gamble game as well, as always.

You can find the game in every Endorphina online casino and play for only €0.01 per spin. The game grants 1,000x max. If you liked our Fairy Tale slot review, you might find other Endorphina slots interesting in our slot reviews department.

WHERE TO PLAY FAIRY TALE FOR REAL MONEY:

Players, we need your help with how we should to rank and rate these reviewed casino games. You can help us by rating this game, and if you really enjoyed playing Fairy Tale. You can also share it with your friends on Facebook, Twitter and via email. For all freeplay games, if your free credits run out, simply just refresh the page and your balance will be restored.