Florageddon! is a highly volatile slot coming from Yggdrasil. The online slot features a post-apocalyptic theme depicting a world taken over by unfriendly plants. Florageddon! action takes place on a 5×3 game grid that pays both ways and where wins form when identical symbols land on at least three adjacent reels starting from either the leftmost or the rightmost reel.

You can join the world where Florageddon! took place from all devices, with stakes ranging from €0.20 to €100 per spin. The game is highly volatile and comes with four RTP settings, the most generous one being 96%. The hit frequency is 18.15%, with wins being capable of setting off a train of events. Players can benefit from dropdown wins, dual progressive win multipliers, added wilds, special awards, pay both ways, and free spins.

As you experience the doom of human civilization in the world of Florageddon!, your chances of scoring great prizes flourish with the DuoMax mechanic which features a both-way multiplier! In addition, you get two Buy Bonus modes and a gamble feature that grant you more free spins that will help you destroy the grim foliage’s reign of terror.

Although post-apocalyptic slots are nothing we haven’t seen before, Yggdrasil managed to skip all the stereotypical zombie-themed slots, and release something slightly more unique. Do you have what it takes to defeat the plants threatening to destroy the civilization? If the answer is yes, then keep reading our Florageddon! slot review. 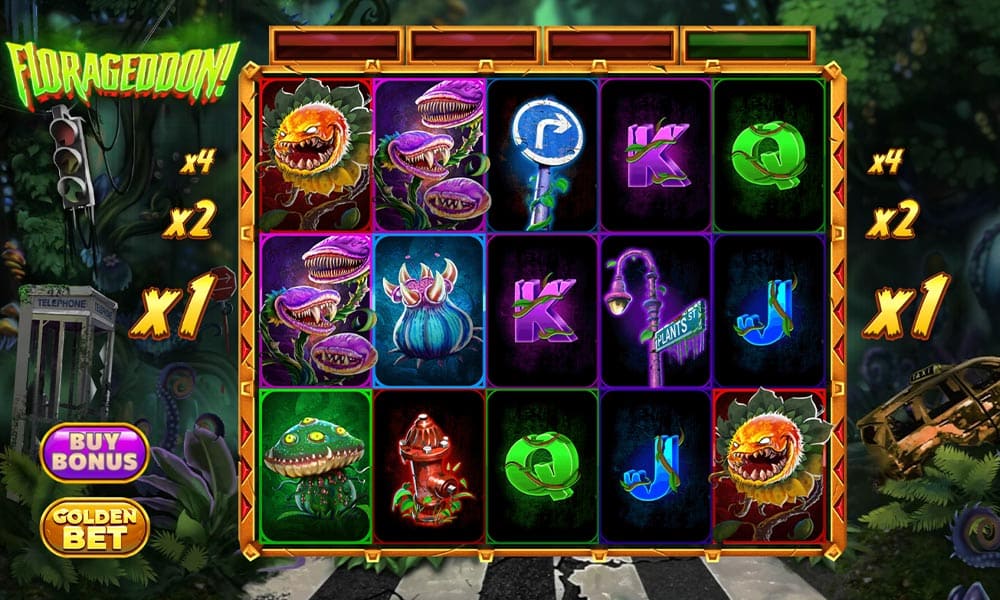 Now, for context’s sake – the plants in Florageddon! slot seem to have wiped out the human population and taken back the earth. You will see what once was probably a busy city scene, however, now it is overgrown with plant life. Something definitely bad happened here, with these plants sporting nasty personality and even nastier set of sharp teeth.

As we have already mentioned Florageddon! gameplay takes place on a 5×3 game grid featuring a DuoMax mechanic which features a both-way multiplier! This online slot has a betting range between €0.20 to €100, an RTP of 96% and a fair 18.15% average base game. It also features high volatility, which gives the slot the potential for hot runs if you manage to get lucky. The Florageddon! max win potential is capped at 20,000x the stake.

When it comes to symbols, you will see some ivy-covered J-A card royals, which award 0.5x for five of a kind. They are followed by road signs, clocks, lamps, and fire hydrants awarding up to 0.8x for five matching ones, and finally, you have the four plants as premiums worth up to 5x the stake for a five of a kind win. This online slot features a wild symbol, as well, which replaces any regular paying symbol. The 5-reel, 3-row game board pays both ways and forms wins when identical symbols land on at least three consecutive reels, starting from the leftmost reel or the rightmost reel.

Florageddon! slot comes with the dropdown feature which will remove winning symbols from the grid when they land. A wild will appear appears in one of the empty spaces while the rest of the gaps are filled with symbols falling from above. If a new win forms, the feature will trigger again until there are no new wins.

Dropdowns also come with two progressive win multipliers – one displayed on each side of the reels. Depending on which side the win starts, either left or right, the respective multiplier is increased. When dropdowns end in the base game, the multipliers are reset. Both ways wins are multiplied by the combined of the two multipliers.

You will also see a dropdown counter above the reels. When it is filled, the counter will activate a special award. In the base game, players will need to fill 4 consecutive dropdowns, and in free spins only 3 are needed. The special awards include:

If you manage to land 3, 4, or 5 scatter symbols, you will trigger 7, 9, or 11 free spins, respectively. Before the Free Spins round begins, you can choose to either collect or gamble for the chance to win up to 16 free spins. During the feature, the multipliers do not reset between spins.

Wherever applicable, Yggdrasil offers players to access the Bonus Buy or Golden Bet feature when playing Florageddon! The Golden Bet increases the stake by 50%, decreasing the number of dropdowns required to fill the special award meter in the base game from four to three. The Bonus Buy allows players to buy 7, 9, or 11 random free spins for the price of 100x the bet. Or, they can also invest 400x the bet for 16 free spins.

The plants are out of hand in the Florageddon! slot city, and it is up to you to stop them. Work your way through the dystopian world of flesh-eating blossoms to claim rewards that drop after every win. The slot will see you defeat the dreadful plants four consecutive times, with a random feature that boosts your efforts as the apocalyptic gameplay takes hold. The game comes with a fresh and original theme that delivers a high energy gaming experience with top-notch visuals, animation, and audio. If you think you have what it takes to combat the fearsome flora and set humankind free – Florageddon! Awaits with wins up to 20,000x!

WHERE TO PLAY FLORAGEDDON! FOR REAL MONEY:

Players, we need your help with how we should to rank and rate these reviewed casino games. You can help us by rating this game, and if you really enjoyed playing Florageddon!. You can also share it with your friends on Facebook, Twitter and via email. For all freeplay games, if your free credits run out, simply just refresh the page and your balance will be restored.