Fruits Kingdom video slot from Euro Games Technology (EGT) is a classic fruit game which will appeal to all of the old-school slot enthusiasts still craving for a proper land-based experience in this booming online casino world.

This game is a 5 reel set-up with no more than 10 paylines. It boasts a generic feel to it with visuals and audio of a genuine machine. It will be of appeal to thrill seekers however thanks to its four-fold progressive jackpot which makes things rather interesting.

Available for €0.20 per spin up to €50 as the maximum wager, Fruits Kingdom is a regaly affordable game that will generate a wide audience. 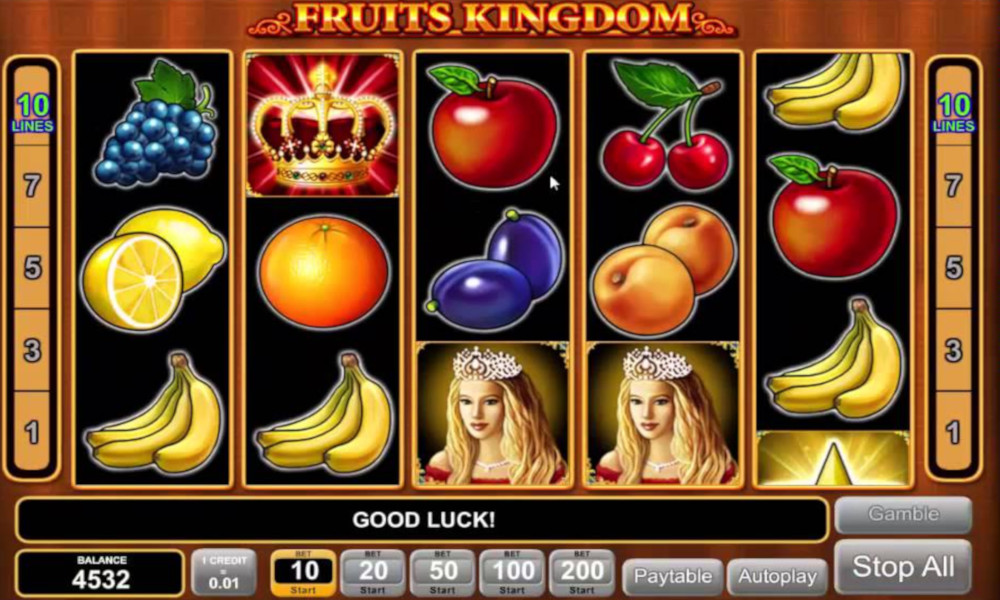 HOW TO PLAY Fruits Kingdom?

With ten paying lines to choose from, Fruits Kingdom might strike you as an uneventful game. That’s not the case actually thanks to a gameplay that’s become an EGT trademark.

Your general aim is to line a combination of at least two matching symbols on a payline in order to get a win. All pays are left to right on adjacent reels which makes Fruits Kingdom a startand slot game.

As already customary with EGT, the reels are set in motion with a tap on the bet size. The values start from 10 and move up to 200, which will cost you the maximum €50 a spin.

This game also comes with an Autoplay button which allows you to automatize the playing process and sit back in enjoyment.

Those who are looking for an exhilarating gamified scenario in a game such as Fruits Kingdom are better off searching for it elsewhere as this EGT gem has nothing more than a standardized gameplay to offer.

Wild & Scatter – Among the classic fruit symbols you’d expect to get in a title like this, there is a dash of royalty with a Prince and Princess (or possibly even King and Queen) symbols which are the high denominations rewarding players in pairs.

Still, the most valuable symbols are Wild and Scatter which will win you a whopping 200,000 coins and launch a Free Spins bonus, respectively. The crown representing the Wild will also double your win when part of a winning combo.

Gamble – Any win less than 1,500 coins in value is subject to a Gamble feature which allows you to double the amount won. You will be taken to an in-game screen with hidden cards prompting you to choose either Red or Black. A correct choice pushes your win 2x up whereas the wrong pick see you lose the base game winnings.

Free Spins – This is where shining star Scatters come to play to reward players with 15 free spins and a 3x multiplier. At least three Scatters anywhere on the reels will launch this feature which can be retriggered for another batch of 15 free spins – and 30 in total!

Progressive Jackpot – Also called a Jackpot Cards feature is a four-fold bonus triggered at random on any winning spin. It has four different levels, marked with card suit signs with Spades level being the most valuable one.

How is it played? Once a winning round is over and jackpot is triggered, a field made of 12 cards facing down will appear over the grid. You are required to pick cards until you get 3 matching symbols which will then correspond to a jackpot win.

The essential beauty of and EGT slot is its simplicity. This slot manufacturer rarely deviates from its well-established game plan and creates games that are a sweet combination of the classic – vintage if you like – and the modern.

With five reels of action and just 10 paylines in play, the Fruits Kingdom still has plenty about it to keep you occupied and satisfied. You’ll love a Wild that doubles your win and a Scatter which gives you 15 free spins and a 3x multiplier.

But most of all, you will adore a four-fold progressive which hits rather frequently. How do we know that? Well just keep your eyes on the ticker above the reels as you play and you’ll see for yourselves.

WHERE TO PLAY FRUITS KINGDOM FOR REAL MONEY:

Players, we need your help with how we should to rank and rate these reviewed casino games. You can help us by rating this game, and if you really enjoyed playing Fruits Kingdom. You can also share it with your friends on Facebook, Twitter and via email. For all freeplay games, if your free credits run out, simply just refresh the page and your balance will be restored.