Gator Gold Deluxe Gigablox online slot is a mouthful, but the lengthy name perfectly describes the treasure this slot is. Yggdrasil Gaming was not joking around with this one – the video slot is Gator Gold online slot on steroids. Amped up by the Deluxe part and Gigablox mechanics, the game opens a story worth 20,000x the stake. It also has 4,096 ways to win – or 4,096 reasons to play. You can get more intel in our Gator Gold Deluxe Gigablox slot review below.

Gator Gold Deluxe Gigablox is designed to sharpen your animal slot senses and boost the action to the maximum. It’s a magnificent release that features the standard Gigablox mechanics, a Golden Gator symbol, Free Spins, and the Gamble booster. More surprises come your way during Free Spins – including Multiplier Wilds and Symbol Upgrades. Plus, as if all this weren’t enough, Yggdrasil Gaming inserted the Bonus Buy functionality to increase the fun level. Suffice to say, it brought the game to a whole new level.

Wild animals run rampant around this highly volatile slot. Thanks to a 96% RTP, you can win back up to 20,000x the stake, but only if you are brave enough. Those who dare enter this savannah can wager a sum between £0.20 and £60 per spin. Great news too: you can play Gator Gold Deluxe Gigablox for free here and at top Yggdrasil Gaming. What are you waiting for? Let’s go search for the Golden Gator! 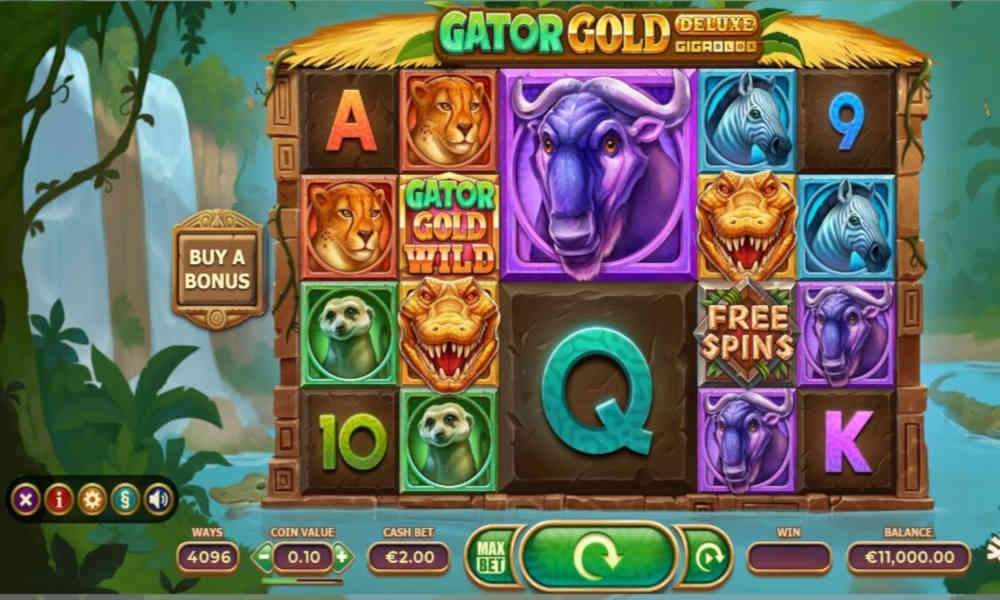 Are you afraid of the wild animals lurking in the savannah? If the answer’s yes, then this game is not for you. Gator Gold Deluxe Gigablox video slot is an organic continuation of the famous Gator Gold Gigablox slot. The game is one of a handful of games that boast the Gigablox colossal icons, which means it’s already more potent than most. It’s not called Deluxe without a reason – Yggdrasil introduced the upgrade mechanic which lets you upgrade high icons into Super High symbols, paving the way to great riches. Those looking for adrenaline will certainly find it in this aesthetically pleasing slot.

Now that we mentioned aesthetics, it’s good to say a couple of things about the visuals. Like always, Yggdrasil made impeccable graphics and used a great design worthy of an Oscar for animated movies. The reels hold up to 6 reels and four rows, but that concept is (happily) ruined by giant Gigablox icons that can go up to 4×4 on the grid. That’s two-thirds of the entire grid covered by a single symbol! Furthermore, the game uses 96% RTP and high volatility as its shields against frequent wins. Don’t worry, although you might not see wins often when they come, they will be big. The highest potential win you can score in Gator Gold Deluxe Gigablox is 20,000x or £1,200,000. The highest bet possible is £60.

The symbols on the grid are a combination of animals and card royals. The lowest icon is the 9, while the highest is the Golden Gator icon. The Golden Gator is worth 6x for a suit of 6 tiles on the grid. To win, you will need to land at least three matching icons on 3 consecutive reels starting from the left side.

If Gator Gold Gigablox had a wealth of features, the Deluxe variant is even better. Perched on a 6×4 grid with Gigablox tiles, the game brings the upgrade mechanic to life. Let’s see how it works.

If you liked Gator Gold Gigablox, you better believe you are going to love Gator Gold Deluxe Gigablox. The new slot is an updated version of the original slot, complete with stunning visuals, excellent graphics, and really fun gameplay.

Thanks to Gigablox and the Upgrade Symbol mechanics, you can now enjoy bigger and better wins, exciting features, and Gator Gold upgraded symbols that pay even if you land only two. It’s a great slot for all those savannah fans out there.

You can play Gator Gold Deluxe Gigablox for real money at any Yggdrasil Gaming casino. Play the slot or look for free demo slots online at your favourite casino – the choice is yours. Either way, you won’t regret it.

WHERE TO PLAY GATOR GOLD DELUXE GIGABLOX FOR REAL MONEY:

Players, we need your help with how we should to rank and rate these reviewed casino games. You can help us by rating this game, and if you really enjoyed playing Gator Gold Deluxe Gigablox. You can also share it with your friends on Facebook, Twitter and via email. For all freeplay games, if your free credits run out, simply just refresh the page and your balance will be restored.

See all of our Online Slots game reviews where you can play 655 online slots games for real money in any of our recommended casino sites.