Latching on the popularity of an empowering slot Girls with Guns which stirred plenty of controversy with its strong standpoint on woman power, Microgaming made sure to send an even stronger message with its 2014 sequel Girls with Guns II – Frozen Dawn available on all devices both for free and for real money.

From the damp jungle setting found in the original title, the Frozen Dawn takes us deep into the snow-capped Arctic where Katherine, Maria, Alex, Zoe, Jess and Kira are all geared up in their winter attires and ready to fight against the evil.

The girls as high paying symbols are joined by the low denominations presented as classic playing cards from 10 to A. there are five reels and 243 ways to win in this action packed Microgaming title which pack the RTP of just a tad over 96%. 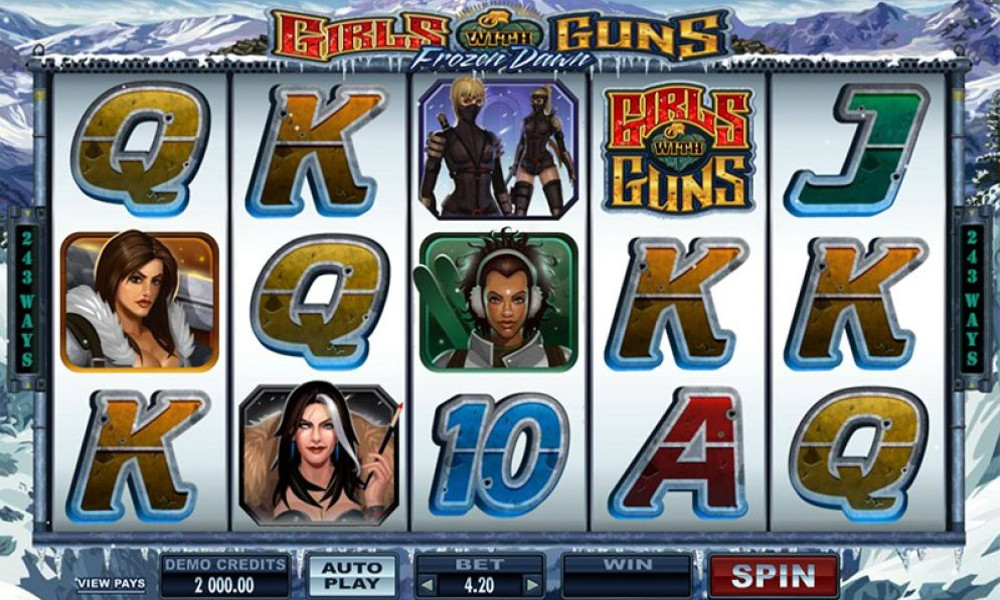 HOW TO PLAY Girls with Guns II – Frozen Dawn?

Girls with Guns II – Frozen Dawn will captivate you with its fantastic graphics and a rather vivid, close to cinematographic visuals. It’s a highly detailed game which comes with plenty of playing options but at the same time with a rather straightforward gameplay.

Start off by selecting the bet amount which ranges from €.030 to €4.50, making this slot game affordable for a wide range of players – starting from the enthusiastic beginners to high rollers who will have trouble resitting the temptation.

The game pays for a winning combination comprised of at least three matching symbols on an active payline starting from leftmost to right.

You set the reels in motion by a simple click on the spin button whereas you also have the ability to select the autoplay option and sit back to watch the action unfold before your eyes.

Shootout Bonus – the action starts in the base game where players can hope to be hit by a shootout bonus which is randomly triggered after any winning spin. During this feature, one of the girls will jump on the game screen to target one high-value symbol for you to shoot and reveal a cash prize which is also random in value.

Wilds and Scatter – Girls with Guns logo is the game’s Wild which replaces all other symbols except for the Scatter. This game comes with another Wild as well, represented through the outline of all six girls and their silhouettes on a single tile. This particular Wild is called the Special Wil which can land anywhere on the third reel. Once it does, it will expand to make the entire reel Wild.

The Scatter symbol is a picture of a satellite hovering around the planet and it’s responsible for the rest of the game’s features. Three, four or five Scatters will trigger a Free Spins feature which offers 12 complimentary rides on the reels and a randomly assigned feature.

As for the Magnetic Wilds Free Spins feature, it is activated by Magnetic Wilds which appear only on the last reel. These magnetic Wilds will however move to the left after every free spin until they form a winning combination consisting of a full vertical stack of wilds. Once this happens, they will explode on the next spin.

It happens to often that we see slot sequels fail to live up to the stature of the original title. Luckily, this isn’t the case with Microgaming’s Girl with Guns II – Frozen Dawn which is truly a fantastic game.

This game comes with 5 reels, 243 ways to win and a selection of action-packed bonus features. Universally loved Free Spins are given a formidable facelift thanks to the addition of Frozen Wilds and Magnetic Wilds which get frozen in place and moved across the reel grid, respectively.

With an RTP of just over 96% and a great number of available ways to win, the Girls with Guns II – Frozen Dawn is a daunting slot title which will be equally popular with both male and female part of the audience.

WHERE TO PLAY GIRLS WITH GUNS II – FROZEN DAWN FOR REAL MONEY:

Players, we need your help with how we should to rank and rate these reviewed casino games. You can help us by rating this game, and if you really enjoyed playing Girls with Guns II – Frozen Dawn. You can also share it with your friends on Facebook, Twitter and via email. For all freeplay games, if your free credits run out, simply just refresh the page and your balance will be restored.

Arctic Valor
Put on some warm clothes as you are about to be taken to an ice-laden adventure in ...
Software:
Games Global, Microgaming
Reels:
6
Paylines:
4,096 Ways to Win
RTP:
96.70%
Volatility:
Medium