Gods of Gold InfiniReels™ is NetEnt’s brand-new video slot. However, it’s not your run-of-the-mill online slot – the game provider made sure of that. Namely, one of the main characteristics of this game is InfiniReels™ mechanics. This tiny addition makes a huge difference when it comes to gameplay, as it allows you to play with unlimited paylines. In fact, forget paylines – Gods of Gold InfiniReels™ feature is just the beginning of this adventure.

Inside the game, you will mostly get excitement from the expansion of reels. With each win, the reels add another reel during a Respin. You also get to watch your progress on the Minimap below. However, once you get used to that sight, you will start noticing other features, such as the Multi Slam and the Win Spins free spins mode.

If you are curious about a slot that has no limitations whatsoever for bet ways, you can check out Gods of Gold in your favourite NetEnt casino. This is a superbly entertaining slot where spins cost between €0.20 and €200. High volatility, 3×3 reels, and 96.21% RTP only add charm to the intriguing gameplay. 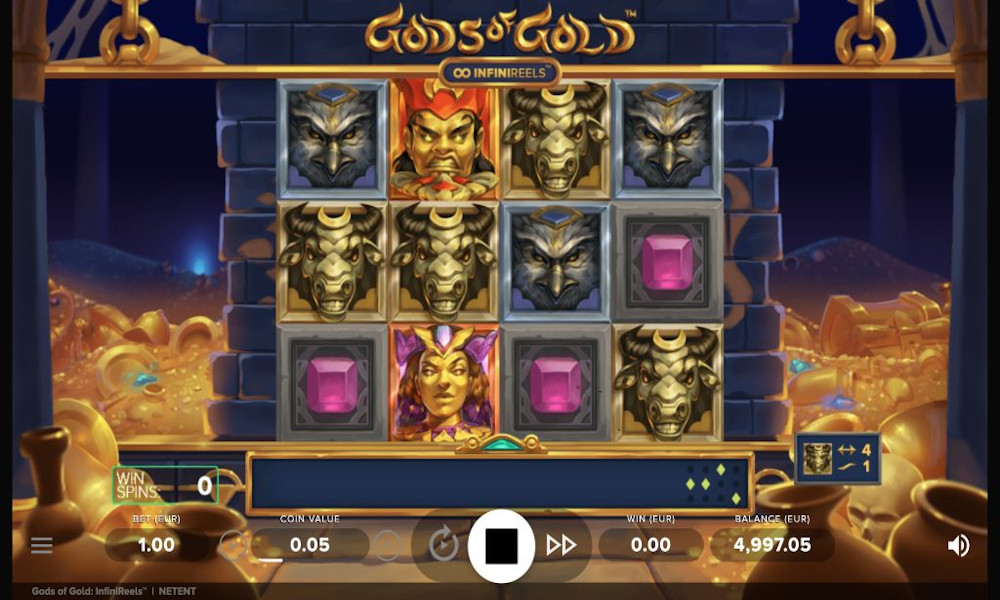 HOW TO PLAY Gods of Gold InfiniReels™?

We wanted to say that we never saw a game like this, but we realized that it would be a lie. Namely, when the world first heard of Gods of Gold InfiniReels™, it already sounded familiar. ReelPlay, a fellow game provider that’s active in Europe, announced its new feature that looked similar. No, scratch that – it looked identical. However, the confusion about two features that look the same was solved when the two companies sat and had a chat. We are glad that the air is clear, but we are still wondering who came up first with the concept.

Now, let’s talk game. So, Gods of Gold takes the players to Mesopotamia in the ancient days. The Pharaoh of Mesopotamia’s tomb is the precise location where you’ll be staying during this game session. Your task in the game is to uncover the riches that are lying around the tomb. And how do you do that? By clicking on the Spin button, of course. The game has a distinct Arabian accent with some pretty elements that reminded us of Aladdin. On the reels, the symbols set is, again, something we haven’t had a chance to see before. The high-paying symbols are mean-looking characters that you do not want to encounter in a dark alley (or a dark tomb in ancient Mesopotamia).

To win, you need to land identical symbols on each reel. They can be in any row, as their sequence is not a big deal. Three are the bare minimum, more bring additional reels (and betways). If you miss a tile on one reel, the presence of a Wild can help with that. The icon replaces any symbol on the reels, so it can basically continue your streak of tiles. It all looks great on the forefront, but the background is spectacular as well. NetEnt’s Gods of Gold features a solid 96.21% RTP and high volatility. Playing Gods of Gold InfiniReels™ for real money will cost you between €0.20 and €200. You can find the game in any verified NetEnt casino or give the demo above a try.

Okay, the sweetest part of our reviews is always about features. You know how much we love good features, and NetEnt is the epitome of great fun with special features. Let us show you what’s at your disposal here.

Gods of Gold InfiniReels™ is NetEnt’s latest revolution in online casino gaming. If you thought we reached the peak of online gambling, guess what – NetEnt is here to prove you wrong. The new video slot is a 3×3 adventure with 27 first paylines, but that quickly changes once you start winning.

If the wins continue rolling and new reels keep appearing, don’t worry because that is the InfiniReels™ feature doing its business. Inside the game, you might start with 27 paylines – but the number is actually unlimited.

That means that, for €0.20 per spin, you can win up to 25,000x the stake in this limitless slot. High volatility and 96.21% RTP promise great fun. If you want to try it, play Gods of Gold InfiniReels™ for fun here, or head to the casino for real-money play.

WHERE TO PLAY GODS OF GOLD INFINIREELS™ FOR REAL MONEY:

Players, we need your help with how we should to rank and rate these reviewed casino games. You can help us by rating this game, and if you really enjoyed playing Gods of Gold InfiniReels™. You can also share it with your friends on Facebook, Twitter and via email. For all freeplay games, if your free credits run out, simply just refresh the page and your balance will be restored.

PLAY GODS OF GOLD INFINIREELS™ AT THESE TOP RECOMMENDED CASINOS

Universal Monsters: The Phantom’s Curse
Net Entertainment has designed a great game based on the Phantom of the Opera. With ...
Software:
NetEnt
Reels:
5
Paylines:
40
RTP:
96.57%
Volatility:
Medium