Gonzo’s Gold slot is a NetEnt slot game that’s the continuation of the Gonzo series. After Evolution purchased NetEnt, the live producer launched Gonzo’s Treasure Hunt, a hybrid between slots and live game shows. In the sequel, Gonzo is still mad about gold, and this time, the quest is even bigger. Gonzo is now in an Inca temple, and he’s ready to find the massive gold.

Join his quest, and you’ll find a plethora of prizes! The game’s main feature is the Free Spins mode, which is sprinkled with add-ons such as multipliers in wins. A great addition to the feature collection is the Golden Symbol Expansion which lets you boost the payout with special expanding reels of symbols. You get to pick the Expanding special symbol before the start of each free spins feature. And you can also retrigger the feature! Other than spins and expanding symbols, there are no other game features worth mentioning.

We loved that NetEnt went back to this amazing slot series and created a new one. The buzz around Gonzo’s Treasure Hunt certainly helped solidify NetEnt’s decision to get back to Gonzo’s Quest. In NetEnt Gonzo’s Gold slot, you play on a 5×5 grid with cluster pays. There are no paylines; you just need clusters to reach a win. The optimal RTP rate for Gonzo’s Gold is 96.11%, which ties in great with high volatility. Furthermore, you stand to gain a great prize because the max payout potential hits the 6,500x mark. It’s a bit different from its predecessors, so read our full Gonzo’s Gold slot review to see just how. 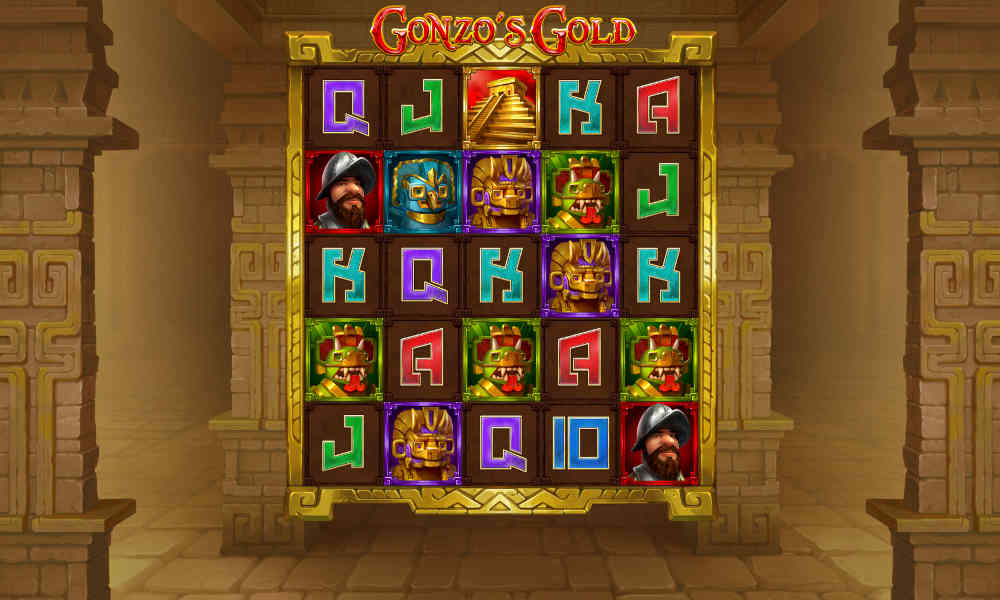 HOW TO PLAY Gonzo’s Gold?

Gonzo is perhaps the most famous explorer in the world of online slots. You cannot find a better and more interesting character in the entire NetEnt’s arsenal, and believe us; it’s a massive arsenal! Gonzo burst onto the scene with the hit Gonzo’s Quest slot. A couple of years later, Red Tiger, the subsidiary of NetEnt, refreshed our memory of the quirky conquistador with its Megaways release. And finally, Evolution mixed it with the live casino sector with Gonzo’s Treasure Hunt live game show.

But finally, after eight years, NetEnt decided to revisit the classic by themselves and create a new instalment. In truth, we are happy that they’ve done that. Gonzo is a popular character and still quite relevant even eight years post-release. However, diehard fans might consider this a bit underwhelming, as Gonzo is not as present here as he was in other games. The reason why NetEnt decided to take a step back with Gonzo is not known, but there must be a good one. Instead, we get an Incan temple setting where players get a 5×5 grid with cluster pays.

The biggest thing about this game is the experimentation with cluster pays. You now have to form clusters to win a prize, and there are no winning patterns. However, don’t expect any cascades. The symbols do not cascade down the grid in any spin, which might be a bit weird. Gonzo does appear in the game, but only as of the game’s top-paying symbol. To win, you need either three adjacent high icons (Gonzo and the lot) or four low-pay tiles in a cluster.

The game has several RTP options, but the best one is definitely 96.11% RTP. Another important factor is the volatility which in this case registers as high. So, you can win big or not win for several rounds; it all depends on your lady luck. Gonzo’s Gold search will cost you between €0.20 and 200 per spin. One final detail we cannot miss note is the max game payout of 6,500x the stake. You can play Gonzo’s Gold for real money at all NetEnt online casinos.

Slots’ main Ace are their features. Unfortunately, Gonzo’s Gold slot does not have a plethora of features like we are used to having, but it’s definitely worth checking out. Here are the main game features in NetEnt Gonzo’s Gold slot game.

Fans of Gonzo, rejoice – NetEnt is bringing Gonzo back! One specific thing about this slot is that it features significantly less Gonzo than we might have been used to. Gonzo is loved for his quirky personality and comedic elements throughout the game. In Gonzo’s Gold, you won’t have that. But he does appear on the grid and delivers a big payout.

The game does not have many features, but the ones that are inside are brilliant. Free Spins work well with Symbol Expansions, despite not having a cascading system for post-win icons.

You can win up to 6,500x the stake in Gonzo’s Gold slot, and that’s a great incentive to try the fourth Gonzo slot! Find the game in all NetEnt online casinos and play for real money.

WHERE TO PLAY GONZO’S GOLD FOR REAL MONEY:

Players, we need your help with how we should to rank and rate these reviewed casino games. You can help us by rating this game, and if you really enjoyed playing Gonzo’s Gold. You can also share it with your friends on Facebook, Twitter and via email. For all freeplay games, if your free credits run out, simply just refresh the page and your balance will be restored.