Hotline is back! The sizzling chase on the streets of ‘80s Miami is here to melt your hearts again. NetEnt is rolling out the much-anticipated sequel to its slot blockbuster near the end of August 2020. And many of our readers ask us, what can we expect from the new release? Well, for starters, a great payout. Hotline 2 can grace you with 5,184x wins. The paylines expand during Free Spins, which helps with generating bigger payouts.

When it comes to the special features, Hotline 2 is here to show off quality, not quantity. NetEnt tried to keep it simple, but that’s hard with such an over-the-top game theme. That is why there are only Expanding Wilds and Free Spins here, but that is more than enough for a hot chase. There is also the Hotline mechanic that involves the Hotline zone on the middle reels. This activates the Hotline feature that brings even more excitement to the game.

If you decide to try out the new Hotline 2 video slot, you will be able to enjoy the full splendour in any NetEnt online casino. The game includes a betting range of €0.30-€150 for each spin. Players will be glad to learn that the game is accessible via any platform – including desktop and mobile phones. 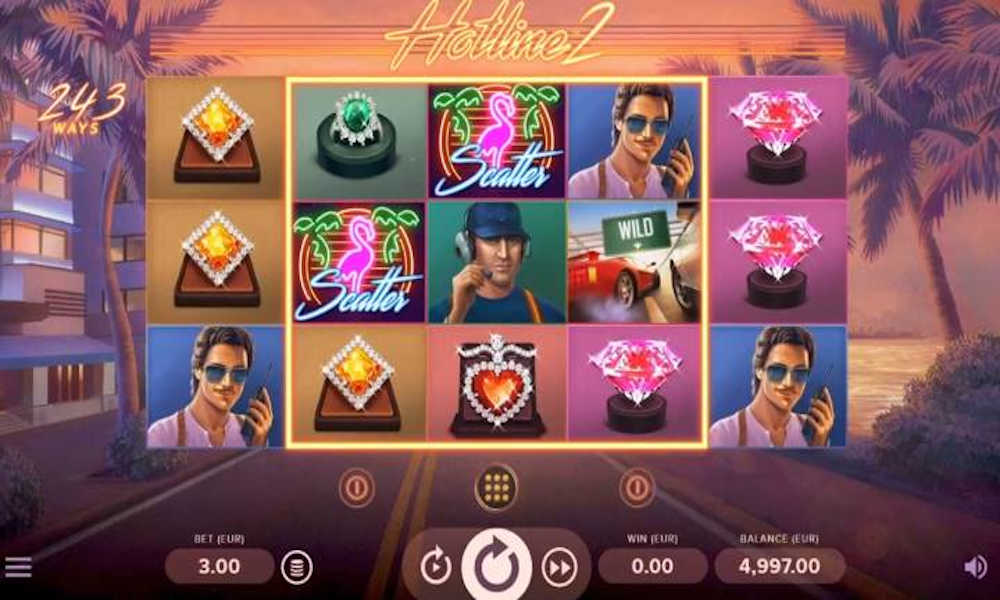 HOW TO PLAY Hotline 2?

Years after the show ended, Miami Vice still manages to stay in fashion. Thematically speaking, there is something quite appealing in the car chases on the neon-lighted streets of Miami during the ‘80s. NetEnt clearly sees that as one of its top-performing slots is placed exactly in that setting. Hotline 2, the sequel to the Miami Vice-inspired slot, draws many of the references from its predecessor. The layout, design and soundtrack, although similar, manage to be even better than the original. If you are a fan of the show and enjoy this theme, you are going to love Hotline 2.

The first thing that we see when we open the game is the legendary duo. Two detectives, Riviera and Quinn, are out and about on the streets of Miami doing their job. They are joined by Kitty Weiss, because why not insert a pretty lady in the midst of a crime slot? The three characters are the main stars on this show of a slot and three premium symbols. Besides them, there is the mic guy and some jewellery that makes up the low-paying symbol collection.

Just like the original, Hotline 2 boasts medium volatility. That is perhaps not what you expected to see in such a game, but we think that NetEnt did a great job with volatility. When it comes to RTP rates, the sequel boasts 96.05% as the max RTP rate. This can change during the game, depending on the Hotline zone that you activated before that. The bets will cost you between €0.30 and €150 a pop. The 5-reel slot boasts 243 ways to win, which is significantly better than the original 30. But that is not all. During the special features, the number of winning ways can rise up to 1,944!

While creating this game, NetEnt’s team likely adhered to the motto “less is more”. You won’t be dazzled by the number of boosters, but their efficiency and versatility will surely astound you.

Pink sunsets, neon streets, and hot car chases – what’s not to love? NetNet’s new Hotline 2 video slot brings you back to Riviera and Quinn and their spectacular adventures around ‘80s Miami. And we thought it was impossible, but NetEnt managed to make this sequel even better than the original.

Little has changed here in terms of the features. The Hotline Zone is now on the three central reels, which means you have better chances of securing big wins. If you manage to complete three Scatters, you will get to the Free Spins where Wilds expand and cover full reels.

Another thing that we quite liked is the fact that you can boost the winning ways. In the base game, there are only 243 ways to win, while the boosters kick that up to 1,944. The game is available in all NetEnt online casinos, so go and check it out!

WHERE TO PLAY HOTLINE 2 FOR REAL MONEY:

Players, we need your help with how we should to rank and rate these reviewed casino games. You can help us by rating this game, and if you really enjoyed playing Hotline 2. You can also share it with your friends on Facebook, Twitter and via email. For all freeplay games, if your free credits run out, simply just refresh the page and your balance will be restored.

Jack Hammer 2
There are many different video slots that have a comic book theme, but with Jack ...
Software:
NetEnt
Reels:
5
Paylines:
99
RTP:
97.10%
Volatility:
Low

Gonzo's Quest
Gonzo’s Quest is one of the most popular video slots at NetEnt sites and this game ...
Software:
NetEnt
Reels:
5
Paylines:
20
RTP:
96.0%
Volatility:
Medium

Dead or Alive
Dead or Alive slot by Swedish specialists NetEnt is one of those games that go against ...
Software:
NetEnt
Reels:
5
Paylines:
9
RTP:
96.80%
Volatility:
High