Yggdrasil Gaming have been quick to establish themselves as the online gaming industry’s most innovative manufacturers and their 5 reel and 58 payline slot title Jungle Books definitely fits the bill and does them great justice.

With its cinematic graphics and true HD visuals, Jungle Books takes you deep in the jungle where you’ll experience an unforgettable adventure. Packed with enticing features available to you through a realm-based gameplay, this paying both ways slot game from 2017 has been an instant hit with a wide audience.

Loosely based upon the famous collection of stories by the English author Rudyard Kipling The Jungle Book – which turned into quite an entertainment franchise – this slot game boasts no less than 10 gamified bonus features which are both rewarding and engaging. 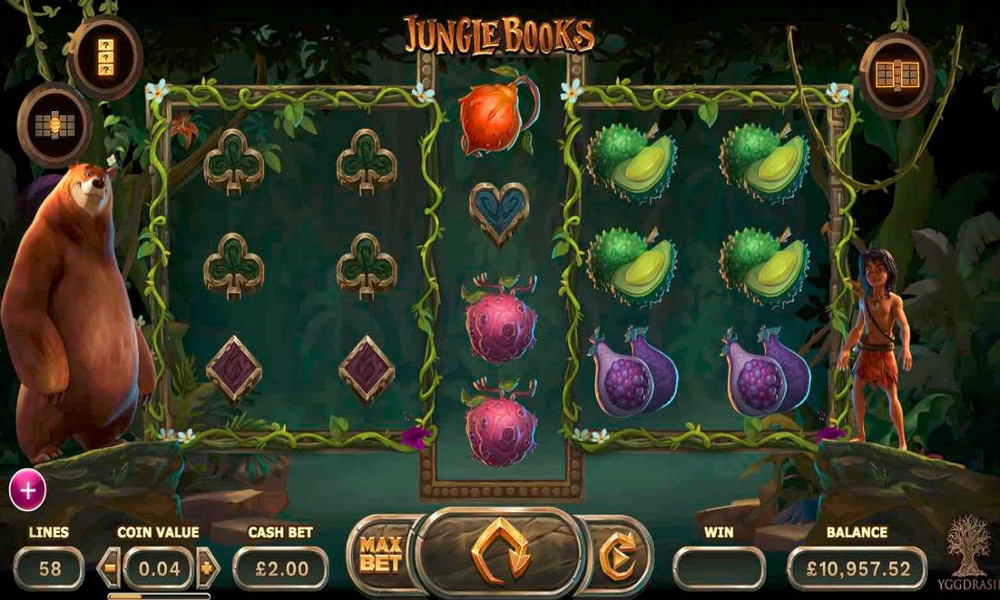 HOW TO PLAY Jungle Books?

Before we delve any further with explanations on how to play the fantastic Jungle Books slot game, we’re sure most of you will be well aware what this game is all about. You get to follow Mowgli and his animal friends in an unforgettable adventure presented in high resolution and impeccable graphics.

The sheer quality of the game is enough to leave you speechless whereas it’s thanks to an elaborate gameplay that you will be left glued to a screen for hours. Don’t worry though, Jungle Books is not a complicated game. You just make sure to adjust it up to your personal preferences and enjoy the fun.

Suitably placed below the playing grid are the game controls and the first thing you should do is to set the coin value for a cash bet going up to €100. The number of paylines is fixed to 58 which is more than enough to get plenty of winning options – particularly when you know this great game will pay both ways but only in certain situations. All you need to benefit from this game, however, is a combination of at least three matching symbols on the reels.

This fairy-tale slot game houses five hosts – the boy (Mowgli), bear, tiger, panther and snake. Each of these characters have their own respective realms with their own bonus features (two of them). Each realm host can be combined with a guest which results in an even bigger payout.

The Panther Realm: with this night-black animal as host, the players will benefit from a random wild Superhigh pay Symbols feature which gives you Wilds for bigger wins. You can also grab a Random Multiplier – 2x, 3x or 5x – on random wins.

The Tiger Realm: any win in this realm is enough to launch the Sticky Respins feature which will see reels go through a complimentary round with winning symbols stuck in their place. With the middle reel being the tallest one, you will also benefit from stacked Wilds (represented as a fruit) which are being added to help you win big.

The Boy Realm: Mowgli is here to reward you with Synced Reels which adjacent reels of the same heights get synchronised to give you the same result and boost your winning potential. Alternately, there is a Spreading Wilds feature here as well which will see each wild spread out to create one or two extra wilds in random positions.

The Snake Realm: the tail wiggling creature will activate the Win Both Ways feature where you will benefit from win on either side of the reel grid. There is also a 3x Wild Multiplier feature where all wins including at least one Wild symbol will be subjected to a triple-worth multiplier.

The Bear Realm: the boy’s best friend will definitely become your best pal as well thanks to the Honeycomb Bonus where new – honeycomb – symbols are added to the tallest reel on the grid. This symbol will carry a coin prize with it as well, which is enough to put a smile on your face. You get to pick one hidden reward with coins going from 50 up to eye-boggling 50,000 coins. Alternately, in this realm you get to benefit from a Stacked Symbol feature where a random symbol is chosen to remain stacked on all reels and help you boost your wins.

It’s hard to remain unbiased with Yggdrasil Gaming reviews knowing that this company always does its best to meet – and exceed – expectations. Yggdrasil’s slot games are products of only the highest quality, both in terms of manufacturing and game mechanics.

Visually impeccable with an HD outlay and cinematic feel to them, games such as Jungle Books are more than slots. Yggdrasil is flirting with gamification to bring a new breed of games into the online gambling realm and erase the border between slots and computer games.

With its innovative gameplay which is based on five different realms with two features each – 10 in total – Jungle Books definitely is an engaging and enticing a slot as it gets. You will love the opulent selection of realms and respective features which bring respins, sticky symbols, multipliers and win both ways options for up to a lucrative prize worth 250,000 coins.

WHERE TO PLAY JUNGLE BOOKS FOR REAL MONEY:

Players, we need your help with how we should to rank and rate these reviewed casino games. You can help us by rating this game, and if you really enjoyed playing Jungle Books. You can also share it with your friends on Facebook, Twitter and via email. For all freeplay games, if your free credits run out, simply just refresh the page and your balance will be restored.