Kodiak Kingdom slot is a Just For The Win slot developed for Microgaming casinos. With 6 reels, 4,096 winning ways, and 96.19% RTP, Kodiak Kingdom brings the best of Alaska straight to your screens. Visionaries at Just For The Win created this wonderful slot in honour of the great Kodiak Bear, the almighty ruler of the kingdom. But do you have what it takes to win and survive in the Kodiak Archipelago? We certainly hope so!

We recommend using in-game features such as Multiplier Wilds and Free Spins to boost your survival and winning chances. Multiplier Wilds increase the Multiplier level with each new icon, creating a chain of massive multipliers that follow you throughout the rounds. Free Spins are the game’s peak, with 30 potential gratis rounds achievable with 6 Scatters. They are also re-triggerable, so you can activate additional rounds mid-feature. Kodiak Kingdom slot is also a Feature Buy slot, meaning you can purchase boosters without waiting to trigger them.

Just For The Win Kodiak Kingdom is available across all Microgaming online casinos for only €0.20 per spin. The highest sum you can wager on a round is €10. But don’t let the low max bet fool you into thinking this is a low-volatility game. The variance level hits the ‘high’ mark easily, with 96.19% RTP to top it off. Furthermore, the total hit frequency is 25.56%, meaning there’s approximately one win every 3.9 spins. But the game producer made it all worth it, as the total hit potential reaches 25,000x the stake. Read the rest of our Kodiak Kingdom slot review for more insights. 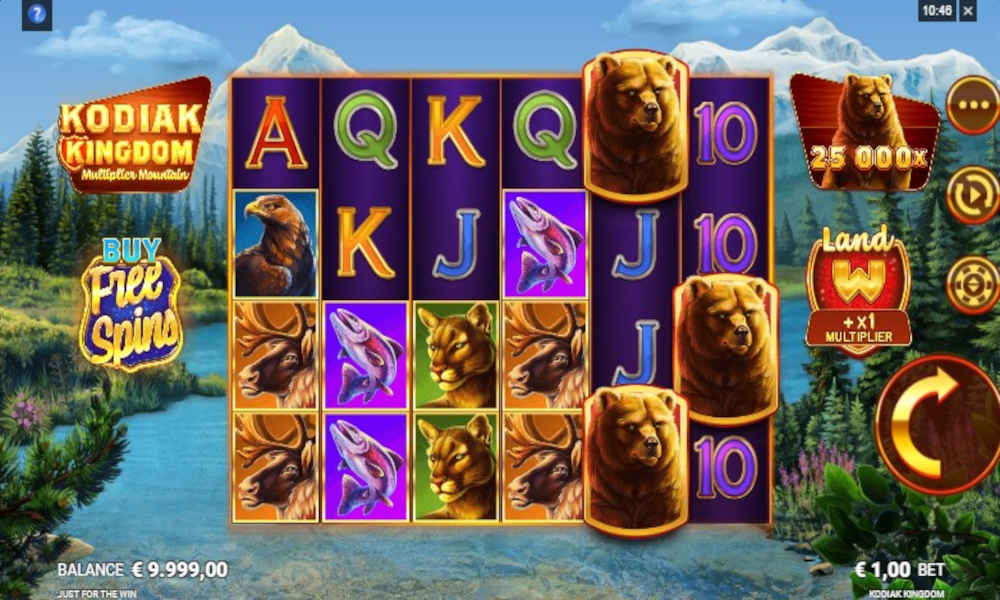 HOW TO PLAY Kodiak Kingdom?

The Kodiak Archipelago is home to many species of animals and vegetation. One of the symbols of Kodiak Island, the second-largest island in the USA, is the Kodiak Bear – the largest recognized subspecies of the brown bear. A striking sight to see, for sure, Kodiak bears inhabit the entire Kodiak Archipelago – as well as Just For the Win’s Kodiak Kingdom online slot.

Just For The Win, one of the most successful game producers in Microgaming’s studio network, created the Kodiak Kingdom to honour the Kodiak Bear and its companions in the archipelago. The visual aspect of the slot is on-point: the majestic landscape of Alaskan islands stretches behind the 6-reel grid while a river flows below the reels. Lush vegetation, clear skies, and snowy mountain tops paint a perfect picture of Alaska, making us wish to transport there the moment we enter the game.

The grid hosts four popular animals that inhabit the archipelago: the golden eagle, Kodiak bear, king salmon, and cougars. These four comprise the premium icon set, which pays between 2.5x and 7x for a set of 6. The premiums are followed by low-paying icons styled as classic card royals 10-A. All things considered, we can safely say the Kodiak Kingdom is not a revolutionary game but certainly one that holds much appeal for nature-loving gamblers. Just For The Win Kodiak Kingdom emits peace and serenity right from the start of the rounds, and not even high volatility can ruin the atmosphere with frequent dry spells.

Besides being highly volatile, the Kodiak Kingdom slot features 96.19% RTP and 25.56% hit frequency. This all means wins won’t come very often, but they will be generous. Rule the kingdom and win up to 25,000x the stake by activating all game features.

Just For The Win makes quality slots, not cheap thrills with dozens of fake boosters and features. Instead, they keep it classy – and the Kodiak Kingdom is the best example of that. Here are all the features found in the Kodiak Kingdom slot online.

Just For The Win made the Kodiak Kingdom slot perfectly. High payout potential and variance is balanced out with a smooth and peaceful theme that takes you to the heart of Kodiak Archipelago.

Meet Alaska with Kodiak Kingdom slot Multiplier Wilds and Free Spins that use progressive win multipliers! Free Spins can be re-activated mid-round, but if you don’t want to bother with waiting, you can purchase free spins with a Feature Buy functionality.

BestCasinos declares the Kodiak Kingdom a visual and technical masterpiece because it will both charm you with its breath-taking landscapes – and steal your heart with 25,000x payouts.

WHERE TO PLAY KODIAK KINGDOM FOR REAL MONEY:

Players, we need your help with how we should to rank and rate these reviewed casino games. You can help us by rating this game, and if you really enjoyed playing Kodiak Kingdom. You can also share it with your friends on Facebook, Twitter and via email. For all freeplay games, if your free credits run out, simply just refresh the page and your balance will be restored.

Aurora Wilds
You know what they say, it’s all about the jackpot! Luckily for us, Microgaming ...
Software:
Games Global, Microgaming
Reels:
5
Paylines:
10
RTP:
96.20%
Volatility:
Medium