Kronos Unleashed is an ancient Greece themed slot game from WMS Gaming which is played on a reel grid which is 8 rows high but can be expanded to the maximum of 12 rows. Simultaneously, the number of paylines will grow from the initial 60 found in the base game to 100 during special features.

This slot machine is playable across all devices – desktop and mobile – from as little as €0.20 per spin. Betting range on Kronos Unleashed goes all the way up to €50 per single spin which makes this WMS Gaming product a highly affordable one.

The action-packed Kronos Unleashed features a Lightning Respin feature, Free Spins and a Jackpot Bonus which can get you the maximum of €250,000. With quarter of a million up for grabs this game is definitely worth your time. 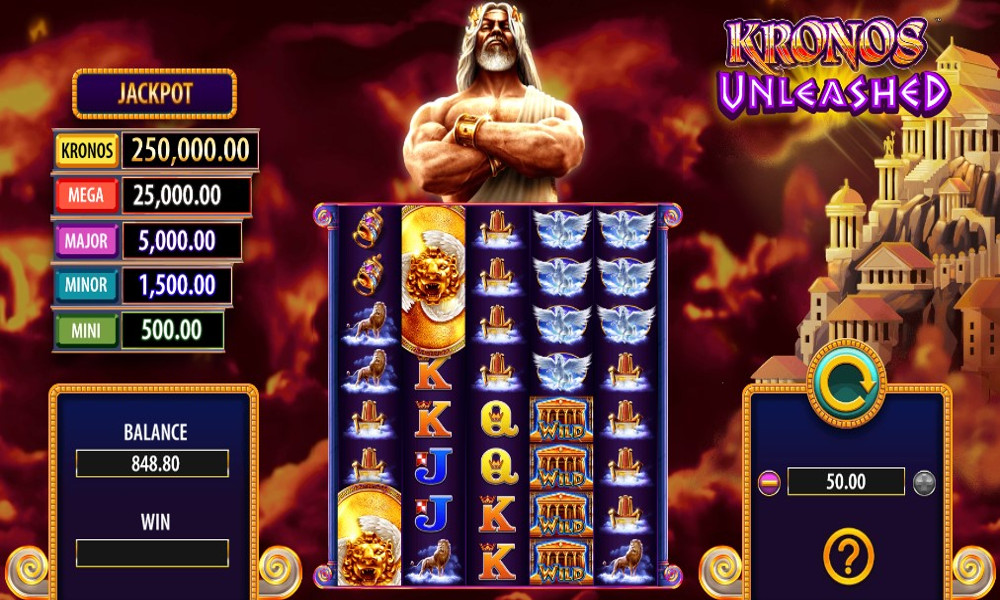 HOW TO PLAY Kronos Unleashed?

A sequel to the highly popular Kronos slot from the same provider, the 2018 sequel is a visually improved variant which also comes with a richer and a more engaging gameplay. The God of Time is here to overlook your spins from above the grid and help you generate divine wins on an expanding reel set.

Despite the elaborate, feature-packed gameplay, Kronos Unleashed is a rather straightforward game. A unique playing set which expands vertically makes this game best played at a smartphone device. The aim is simple – landing at least three matching symbols on any of the 60 paylines found in the base game will grant a win. The game pays from left to right except when the Gold Kronos symbol appears to pay in both direction.

Do note that only the highest winner is paid per winning combination. All line pays are multiplied by the bet multiplier whereas the sum of all multiple winning paylines will be paid if such a scenario occurs. Before you set the reels on motion, remember to set up the game controls and select your preferred bet value. Also, you have an option to automatise the gameplay with the help of an Auto Play button.

Speaking of game features and specialities in this game, they come in abundance. The sheer opulence of offered bonuses is remarkable and WMS will give themselves a tap on the back for a great job done here.

Wild – the Temple symbol is the game’s Wild. It stands for all other symbols in a winning combination – bar the Scatter – and will appear only on reels 2, 3 and 4. The Wild will appear only in base game and during the Free Spins which are explained below.

Free Spins – universally loved feature is triggered by three or more golden lion Scatter symbols which occupy three positions on the grid. The number of free spins players will get depends on the – Boxing Feature. The easiest way to describe it is as groups of reels containing Scatters. 3, 4 or 5 Scatters will reward you with 1, 2 or 5 Free Spins for every boxed symbol which ultimately means you can grab the maximum of 75 Free Spins. It might sound complicated, but once you lay your eyes on it, all will be explained.

Lightning ReSpin Bonus – Free Spins are not even the main attraction here, it’s this particular feature which is triggered by differently coloured Kronos symbols fully expanded on reel 1. The first reel of the set will remain filled with a Kronos symbol while reels go through 3 respins. During these spins, a minimum of 4 symbols will be added – and stuck – on the reels. These symbols are Kronos and Power Up symbols which transform into on 4 of these:

The X symbol opens positions adjacent to it for Kronos to fill. There are up to 4 Power Up symbols that can transform into this symbol during the bonus. The Arrow sign adds 1 additional row at the bottom of the grid with each positions covered by the active Kronos symbol. Each row adds 10 paylines, taking it up to 12 rows and 100 paylines in this game. Plus symbol allows all Kronos paying increased values up to 150 coins for six in a row. Ultimately, the Lightning symbol will trigger a Jackpot Bonus at the end of the spin.

Jackpot Bonus – Each of these symbols appearing on screen will award 1 spin on the Jackpot bonus for a pop at the Kronos Jackpot worth quarter of a million. Each spin on the jackpot reels – both of them – will give you a prize choice from five different Jackpots:

The Kronos Jackpot is the most rewarding one, offering the highest monetary prize in the game which is capped at €250,000.

WMS Gaming have done their best to upgrade the original Kronos slot machine and it’s fair to say they’ve done a remarkable job. Not only did they create a glorious looking slot but also an action-packed one with plenty to play with and plenty to expect.

Kronos Unleashed is a five reel mechanic with eight rows of action and 60 paylines. Due to its intricate gameplay which is packed with different features and bonuses, the game grid will expand up to 12 rows and no less than 100 paylines, which significantly boosts your winning potential.

When it comes to bonuses, Kronos Unleashed comes with quite a few of those. A Boxing Feature which determines the number of Free Spins you will get is only the start. Kronos Unleashed also packs a Lightning Respin Bonus and a five-fold Jackpot Bonus which carries the biggest prize in this colossal game. Pun intended.

WHERE TO PLAY KRONOS UNLEASHED FOR REAL MONEY:

Players, we need your help with how we should to rank and rate these reviewed casino games. You can help us by rating this game, and if you really enjoyed playing Kronos Unleashed. You can also share it with your friends on Facebook, Twitter and via email. For all freeplay games, if your free credits run out, simply just refresh the page and your balance will be restored.