Lava Gold slot is a 5×5 cluster pay slot by Betsoft launched in 2021. The game brings the players to a supposedly Mesozoic Era during which dinosaurs reigned. Players collect dinosaurs, their eggs, and rocky card numbers to create bombastic wins that can trigger big wins. The game’s max payout is 158.92x the stake, which is not grand – but certainly fun to chase around the grid.

In the Lava Gold online game, Betsoft used all its superpowers in making slots to create a wonderful visual masterpiece. But the slot is both visually and functionally perfect. It’s rife with features, and we don’t doubt you will love making clusters and growing them. One of the main game features is the Lava Meter which unlocks Free Spins. Once you get into Free Spins, you get a guaranteed column of icons that sticks to the grid throughout spins. This helps with activating additional features, but also multipliers – which grow, by the way.

Betsoft made this game a cluster pay, which means there are no paylines. Instead, you win by creating clusters of 5 on the 5×5 layout. Lava Gold’s RTP rate peaks at 95.99%. Bets range from €0.25 to €3.75, which means the slot is not a match for high rollers. To find out more about this exciting dinosaur slot, read on our Betsoft Lava Gold slot game review. 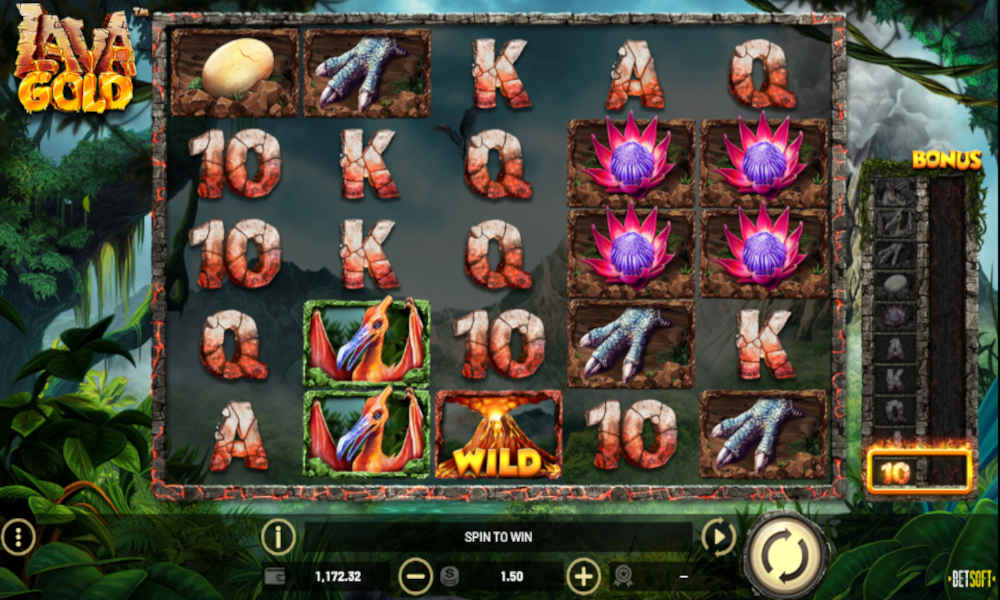 HOW TO PLAY Lava Gold?

Dinosaurs are grand, majestic beings that were sadly wiped out from the face of Earth millions of years ago. Although we haven’t had a chance to see them, their remains are scattered across the planet, and because of these fossils, dinosaurs are still very present in pop culture. When it comes to online slots, there are two ways to see dinosaurs as a theme – they are either frightening and dangerous, or funny and cute. Betsoft chose the first approach, although the dinosaurs in Lava Gold slot aren’t as graphic as in other slots. Nevertheless, they aren’t to be trifled with – they bring on serious action to the grid!

The slot is a 5×5 cluster pay machine, which means you don’t get paid when tiles land in a specific pattern. Instead, they can land however they want – but they do need to be adjacent. Otherwise, you don’t get a win, but rather a missed opportunity to fill the Lava Meter. The Lava Meter is a feature we’ll discuss more in the next section. For now, we will focus our attention on the looks and functionalities of the game.

So, the game screen brings out dinosaurs amid a tropical forest. The jungle is big and there’s also a volcano in the background – a reference to the game’s title, for sure. The symbols include card royals made of rock, as well as two dinosaurs, an egg, and a flower. Naturally, the dinosaurs pay the biggest prize.     The game also features a Volcano Wild that appear on every reel and replace all other icons when needed.

To play the game, prepare for a feature-filled slot with low payouts. The max win capacity of Lava Gold is 158.92x the stake, which is not high at all. Regardless, the point of the game lies in the features, and Betsoft relies on you wanting to enjoy them. The least you can wager when you play Lava Gold slot for real money is €0.25, while the highest wager is €3.75. Furthermore, Lava Gold has medium variance and a 95.99% RTP.

Lava Gold is a cluster slot that Betsoft officially welcomed in May 2021. From the tests that our team performed, we can say – we liked what we saw! A host of features, including free spins, multipliers, and replicating icons are a marvel for anyone interested in Betsoft slots.

Not only that, but it’s also a superbly entertaining game sporting a perfect theme! The only thing we’d like to point out is that it’s not for high rollers. The max bet is low, as well as the max payout potential. Nevertheless, we think it will be a great fit for low rollers looking to have some fun. Play Lava Gold slot for real money at top-rated Betsoft casinos offered right here at BestCasinos and tell us what you think!

WHERE TO PLAY LAVA GOLD FOR REAL MONEY:

Players, we need your help with how we should to rank and rate these reviewed casino games. You can help us by rating this game, and if you really enjoyed playing Lava Gold. You can also share it with your friends on Facebook, Twitter and via email. For all freeplay games, if your free credits run out, simply just refresh the page and your balance will be restored.

Charms and Clovers
Irish themed slot games are quite popular at online casinos, but when it comes to ...
Software:
Betsoft
Reels:
6
Paylines:
40
RTP:
96.3%
Volatility:
Medium