The Megaways™ feature is essentially a game mechanic by which players gain 200,704 ways to win. A deal with Big Time Gaming, thanks to which Playson acquired Megaways, is not the only thing that embellishes this slot. Collapsing Symbols make way for new tiles on the grid, while Scarab Multipliers add more to your winnings with each hit. The game also includes Free Spins that you activate in the usual way, which rounds off the experience. If you are bored by waiting, don’t hesitate to hit the Bonus Buy feature.

The game has Megaways, which means it has thousands of potential ways to win. To be precise, the total winning ways you can have is 200,704 in the game. However, the Legend of Cleopatra Megaways slot is not to be trifled with. The game is highly volatile, with 95.84% RTP. This makes wins incredibly rare but worthy – up to 6,584x the stake in value. To play Legend of Cleopatra Megaways™ slot online, read our review and try the game for free. 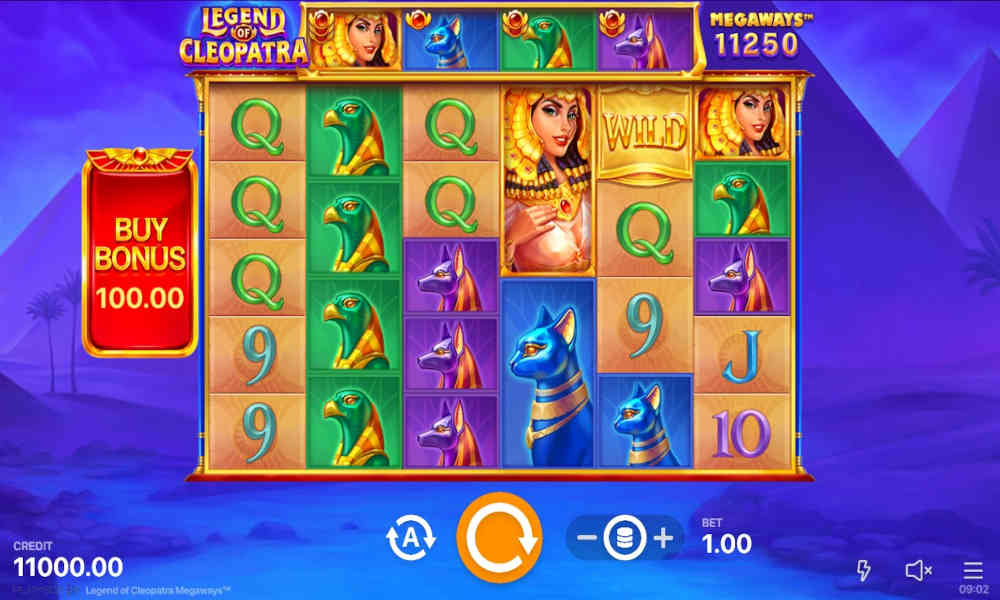 HOW TO PLAY Legend of Cleopatra Megaways™?

Playson is a fan of Egypt, and as we’ve demonstrated several times here at BestCasinos, the ancient Egyptian culture is frequently taken as its source of inspiration. However, we need to point out that, despite an abundance of Egyptian slots, Playson games are not uniform copies of one game. Instead, each release has something unique to offer its audience, and the Legend of Cleopatra Megaways™ slot is an excellent example.

The game focuses on Cleopatra and actually draws on another popular Playson slot. Legend of Cleopatra is an older release that served as the foundation for this Megaways version. In truth, Playson signed a deal to acquire the rights to use Megaways mechanics and likely chose Legend of Cleopatra for its immense popularity. It was a reasonably smart move, as Legend of Cleopatra Megaways represents a boosted version of the beloved original and a brand-new release in itself. Pyramids, trees, and columns stand in the back of the six reels and represent the game’s visual aspect. On the reels, you have six columns that contain between 2 to 7 symbols. There is also an additional row atop the grid that contains four icons. The symbol set is comprised of 10-A card royals and three gods in animal form. Horus, Anubis and Bastet pay a decent sum for a 6-tile combo, while the legendary queen pays 40x if you land 6 of her icons.

To win something in the game, try hitting a 3-icon combo (Cleopatra pays even when you land 2). You can use a Wild to form combos if you lack icons. But keep in mind the volatile nature of the game. Winning won’t be easy because the game is highly volatile with a 95.84% RTP. Moreover, if you start winning, don’t expect the streak to go for long. Instead, try to rely on features that can yield positive winnings. An important part of the game is money management, precisely because the game is highly volatile. Bets go from €0.20 to €100. Oh, and did we mention that you have up to 200,704 ways to win? The number of reels is displayed on every round because the number depends on the number of icons on the grid (which can change due to Megaways).

Playson’s successful Legend of Cleopatra Megaways™ slot is an amazing casino game for all fans of Megaways and Egypt. It combines superb game features into exciting gameplay that will surely entertain you for hours. Here are all the features from this playful slot.

Playson is at it again! Legend of Cleopatra Megaways is Playson’s take on Big Time Gaming’s Megaways mechanics combines a powerful game engine with ancient Egyptian visuals. Again, the game is a masterful rendition of Legend of Cleopatra, this time boosted by BTG’s famous mechanic.

It was a bold move for Playson because this is the first Playson slot with Megaways. However, we are more than delighted with it, as the Legend of Cleopatra Megaways slot is a superb version of the popular original!

With Free Spins, Scarab Multipliers, Collapsing Symbols, and a multitude of Wilds, the game is as exciting as it can be. Playson made it even more interesting with Feature Buy, high volatility, and 95.84% RTP. If you want to play the Legend of Cleopatra Megaways slot online for real money, see our list of recommended Playson casinos.

WHERE TO PLAY LEGEND OF CLEOPATRA MEGAWAYS™ FOR REAL MONEY:

Players, we need your help with how we should to rank and rate these reviewed casino games. You can help us by rating this game, and if you really enjoyed playing Legend of Cleopatra Megaways™. You can also share it with your friends on Facebook, Twitter and via email. For all freeplay games, if your free credits run out, simply just refresh the page and your balance will be restored.

PLAY LEGEND OF CLEOPATRA MEGAWAYS™ AT THESE TOP RECOMMENDED CASINOS

TRY THESE OTHER Playson GAMES