Legendary Excalibur revisits the old legend of Arthur and his mighty sword Excalibur. Red Tiger’s release is a nice excursion into the Medieval days of magic, kings, and legends. The focus of the game is the sword, but don’t worry, you will get to meet Arthur too.

In terms of features, it seems that Red Tiger wanted to create a nice game with a slow flow and simple features. For that, the provider chose not to include the fan-favourite Free Spins and instead delivered the game with Wilds only. Nevertheless, Wilds do have several interesting animations and functionalities. The sword, of course, plays the main role with Respin activations and multiple Wilds.

We guess that players with low-risk tendencies will appreciate this game. It is not designed for high rollers as it delivers medium volatility and unusually low RTP of 95.65%. In any case, you can play it in all Red Tiger casinos for €0.1- €200 per spin. 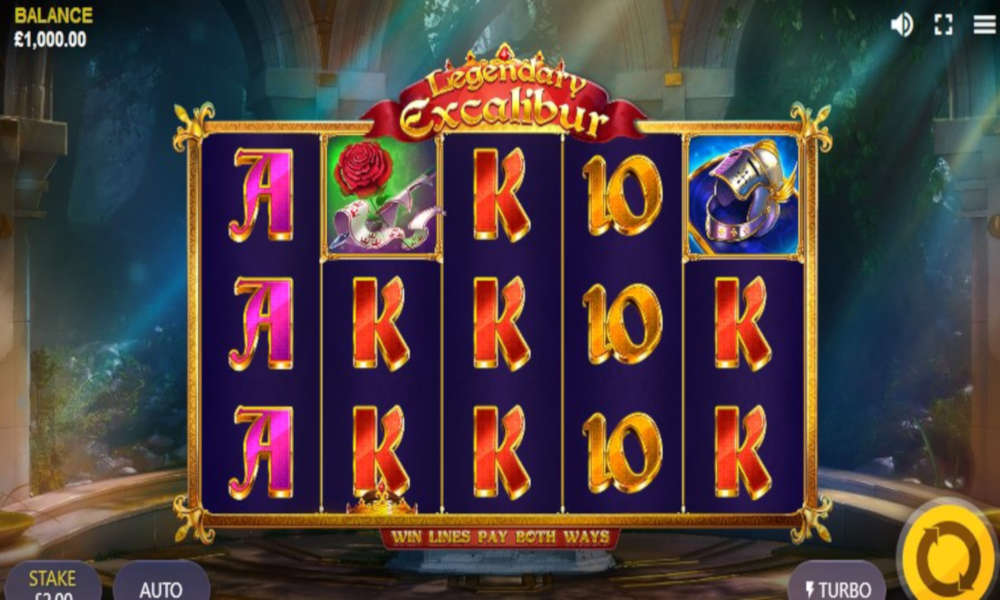 HOW TO PLAY Legendary Excalibur?

Let’s start with the visual part of the game. Honestly, it would not be a mistake to say that the visual aspect of the game is the best part of the game. Red Tiger’s designers did their best with Legendary Excalibur. The backdrop features an abandoned room in a medieval castle. Sunlight pours in from the windows through the tree branches. Birds are chirping, all in all – an exquisite atmosphere. On the reels, you will meet four low-value icons A-10. High symbols include a helmet, a red rose, a goblet bedazzled in rubies, and, of course, King Arthur. For 5 matching tiles, Arthur will pay out 50x the stake, just like the Wild. Speaking of the Wild symbol, it is not hard to guess that it is represented by Excalibur.

This Camelot-inspired game is played on a traditional 5×3 setup. You have 10 fixed paylines, but they work both ways. This makes it better for you, as you can easily say that the winning chances are doubled. To win, you will need at least 3 identical icons on a single payline. Of course, with more icons, the payout is bigger.

As there aren’t many extra features (just one, really) you will have to make do with the base game. Volatility is medium-level, while the Return-to-Player rate is below average (95.65% RTP). That means that the game will frequently yield wins, but they won’t be exactly legendary. The maximum potential win that you can obtain here is capped at 100,000 coins, i.e. 500x the stake. It is not much, but it will be more than enough for low rollers that play if for the sake of entertainment. The minimum bet is €0.1 per spin, while the maximum bet is €200 per round.

As we already said, there is only one feature here. We are not sure why exactly Red Tiger decided to exclude Free Spins. Our guess is that the developer wanted to emphasize the smooth pace of the game with only one feature.

Either way, here is what you will get in Legendary Excalibur:

In terms of design and theme, Legendary Excalibur is a great title. But if you are looking for action and profitability, it’s best to avoid the game altogether. Avid fans of fast-paced slot games will soon get bored with the game as the only feature repeatedly graces the reels.

But, for fantasy-themed slot fans, this game will surely provide enough entertainment. It is built for smooth playtime, with occasional wins that aren’t huge, but definitely worthwhile.

To play the game, stop by Red Tiger’s online casinos and locate it in the lobby. Spins cost from €0.10 to €200 per round. You can play it on any device that you want, including iPhones and Android devices.

WHERE TO PLAY LEGENDARY EXCALIBUR FOR REAL MONEY:

Players, we need your help with how we should to rank and rate these reviewed casino games. You can help us by rating this game, and if you really enjoyed playing Legendary Excalibur. You can also share it with your friends on Facebook, Twitter and via email. For all freeplay games, if your free credits run out, simply just refresh the page and your balance will be restored.

Bass Boss
Another fishing-themed slot is here! Red Tiger is confident that you are the next ...
Software:
Red Tiger
Reels:
5
Paylines:
10
RTP:
95.07%
Volatility:
High
VIEW ALL GAMES