In case you are wondering about the game’s background, don’t worry, we’ll get to that. For now, the most important thing that you must remember is that Lucky Neko is a video slot inspired by the Japanese culture. It’s charming and delicate but packs a lot of power under the hood! The two main features are the – logically – Gigablox and Free Spins. To trigger the Spins, you will need at least five Scatters to land in the sushi shop.

This slot was, at least for us, a wholesome experience. We loved the medium volatility that combines well with 96.4% RTP. Oh, and did we mention that the grid expands with Free Spins? You start the game with 6×4 layout, but that can quickly change into 6×8 if you are lucky enough.  The final detail that we want to mention is that the game boasts 6,953x payout potential. 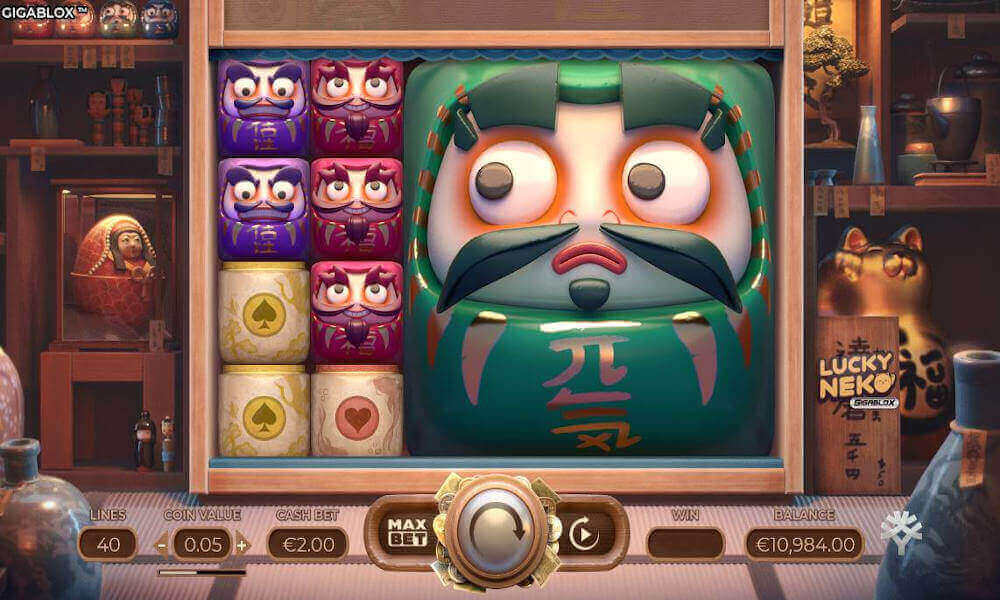 HOW TO PLAY Lucky Neko Gigablox?

Before we begin discussing Lucky Neko technicalities, it would be great to go through the concept behind the design. Lucky Neko is, as you already know, a Japanese-themed slot. In a broader sense, it envelops the Asian culture – but it focuses on other parts of the culture other than dragons flamboyant colours. Instead, Yggdrasil drew the focus on the calm and serene scene from a sushi shop somewhere in Japan. Traditionality is highlighted in the cluttered shop with a peaceful tune that plays in the background.

On the 6×4 grid, you will encounter the Daruma dolls that are traditional dolls that represent fortune and health. Neko is also a Japanese word for cat. Hence, don’t get surprised when you see a plethora of cat dolls scattered across the grid! These dolls are the main characters on the reels, taking up the four high-value icons that grant up to 8x for 6-of-a-kind. As this is the first game to feature Gigablox – giant symbols – the clutter in the shop shakes with each spin. Our team thought that was a nice touch, given the size of the dolls.

Technically, the game is as impressive as in the visual department. Yggdrasil takes care of the payouts and potential hence the game offers max win of 6,953x. That might sound small, but it is very satisfying considering the 40 paylines and €0.08-€100 betting limit. Inside this slot, volatility flows between medium and high, but it pairs well 96.4% RTP in any case. If you want to try it out before you invest real money, click and play the demo version above.

As a first slot with Gigablox mechanics, Lucky Neko is an example of how Yggdrasil Gaming goes all in. You won’t find a plethora of special features here, but you do not need them. The mechanics and Free Spins are more than enough for quality entertainment that lasts for hours. Let’s see both features up close.

If you see the items in the shop shake, beware – a massive symbol is coming! That ought to put a smile on your face because it’s the best part of every round here. Yggdrasil truly knows how to create a slot that’s worthwhile – Lucky Neko is the best proof for that.

Two main boosters are the eponymous mechanics and the Free Spins. Gather enough Daruma dolls and Scatters, and you are going straight to 6×8 Daruma heaven! Inside the special features, the paylines go from 40 to 85, which means you have more chances to win.

Medium-high volatility and 96.4% RTP suggest smooth gameplay, but don’t worry – the 6,953x payout potential is exciting enough. Lucky Neko is a part of Yggdrasil’s growing portfolio, so you can find it in any Yggdrasil online casino of your choice.

WHERE TO PLAY LUCKY NEKO GIGABLOX FOR REAL MONEY:

Players, we need your help with how we should to rank and rate these reviewed casino games. You can help us by rating this game, and if you really enjoyed playing Lucky Neko Gigablox. You can also share it with your friends on Facebook, Twitter and via email. For all freeplay games, if your free credits run out, simply just refresh the page and your balance will be restored.