Monopoly Mega Movers is the latest in line of the Williams Interactive (WMS) powered Monopoly themed slot games added in 2017 to all of online venues offering slot titles from this esteemed developer.

Built upon a 5 reel system with 30 paylines embedded into the gameplay, this latest Monopoly instalment is bound to achieve – and possibly match – the popularity of its predecessors due to its highly engaging gameplay, and feature rich setup that will surely have you glued to a screen.

This particular game is a highly affordable version that can be enjoyed by both even the most enthusiastic of players and high-rollers alike. Playable from €0.50 per spin up to €50 as the top line bet, this game is playable on all devices – starting from desktop to mobile. 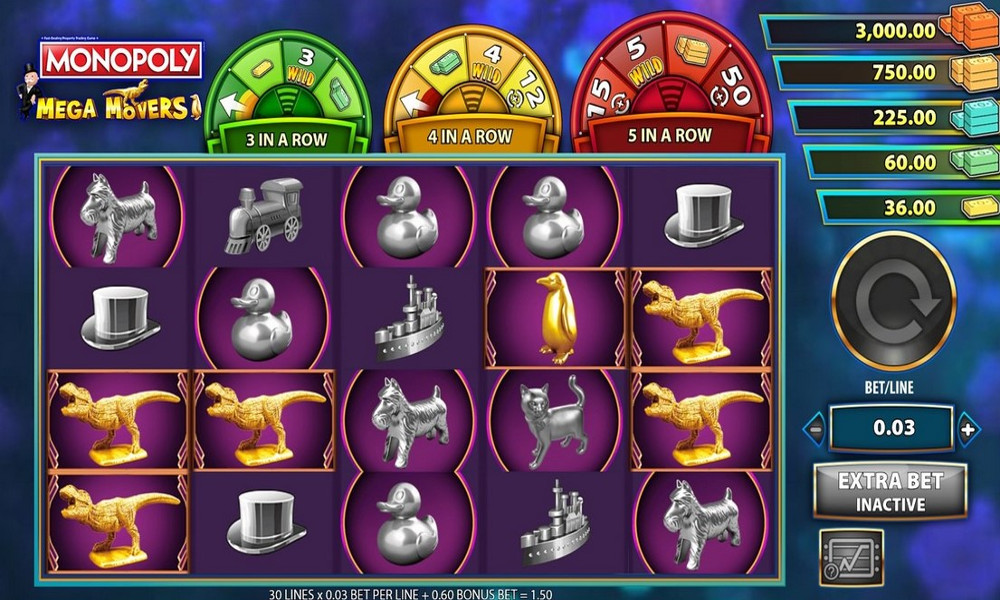 HOW TO PLAY Monopoly Mega Movers?

Monopoly Mega Movers is a high-quality presentation by WMS. It is based on the famous board game that’s been keeping us all occupied since 1903 when Elizabeth Magie came up with a game to explain the single-tax theory by Henry George.

The game – as expected – takes place on a monopoly board like background. The playing grid consists of five reels and four rows, packed with symbols and great action. Before you plunge into the gameplay any deeper you first need to make sure to adjust all the settings. By clicking the Bet/Line button you will choose your bet per line value. Do note that all of the 30 paylines will be in play at all times.

The game starts with a tap of the Spin button and your objective – obviously – is to land at least three matching symbols in order to land a win. The game pays from left to right. Monopoly Mega Movers offers a Autoplay option which is a great solution for those players who like to sit back and enjoy the action.

Monopoly Mega Movers is a fantastically engaging slot title with plenty of action. WMS made sure to pack this latest edition of theirs with features that will both keep you entertained and see you walk away with a bag full of money if you’re that lucky.

Wild: Monopoly Mega Movers slot comes with all the traditional symbols from the game – as a branded title should in the first place – with the Wild Logo with a some dices above it acting as a Wild, naturally. This symbol only appears on the three middle reels and will substitute for all other symbols on the grid. If it lands on the screen together with 1 or more Arrow symbols, it will expand by one position in the direction of the arrow.

3 in a Row Wheel comes with the following features:

4 in a Row Wheel comes with the same three features listed first whereas the only difference is that here you get a shot at Minor and Major jackpot. Ultimately, 5 in a Row Wheel does not offer Upgrade – as it’s a top feature – but gives you all other features and a pop at the Major, Mega and Grand Jackpots!

Wild Spin Bonus: this feature is activated from the Wheel Feature and will throw some exciting spins your way. What you get is a spin with a number of Wilds added to increase your winning potential. Naturally, the number of Wilds depends on which of the three Wheels is activated but the number starts from 5 and goes up to 100 free spins with an Extra Bet option activated.

The Monopoly Mega Movers is truly an eventful slot title. Williams Interactive did a great job to create a brilliant tribute to this popular board game and upgrade its offering of the previous titles – Epic Monopoly 2, Super Monopoly Money, Monopoly Once Around Deluxe.

Five reels and 30 paylines of entertaining action features all of the well-known symbols such as the train, car, top hat, battleship, dog, cat, ducky, penguin and T-Rex with Mr Monopoly there as well. The moustache wearing fella is the most rewarding symbol in the game offering 5x the stake for 5 of those on a payline.

There is much more to be won, however, with this game. WMS packed it with intense action coming from various features. You will have Wilds doing great part to entertain you, whereas the elaborate Wheel Feature is hard to explain and is bet experienced first hand. From it you can hope to land some rather lucrative prizes off of the five-tie jackpot or the Wild Spin Bonus.

WHERE TO PLAY MONOPOLY MEGA MOVERS FOR REAL MONEY:

Players, we need your help with how we should to rank and rate these reviewed casino games. You can help us by rating this game, and if you really enjoyed playing Monopoly Mega Movers. You can also share it with your friends on Facebook, Twitter and via email. For all freeplay games, if your free credits run out, simply just refresh the page and your balance will be restored.