Mount Mazuma slot is one of the most thrilling games Habanero have produced recently. This 5 slot machine offers a highly volatile gameplay packed with no less than five features.  Don’t let the easy-going Hawaiian theme fool you as this particular slot will keep you on the edge of your seat thanks to its huge betting range and a whopping winning possibility.

This game starts with 243 ways to win and two rows of symbols (upmost and the bottom one) hidden behind the palm leaves. Once you manage to unlock them, the game becomes a 5×5 grid with the original RTP soaring from 92.30% to 97.98%.

With Free Spins and Scatters, Extra Wilds and Symbol Multipliers – among other things – Mount Mazuma slot game promises great fun and amusement in addition to a stupefying winning potential of 100,000 coins. 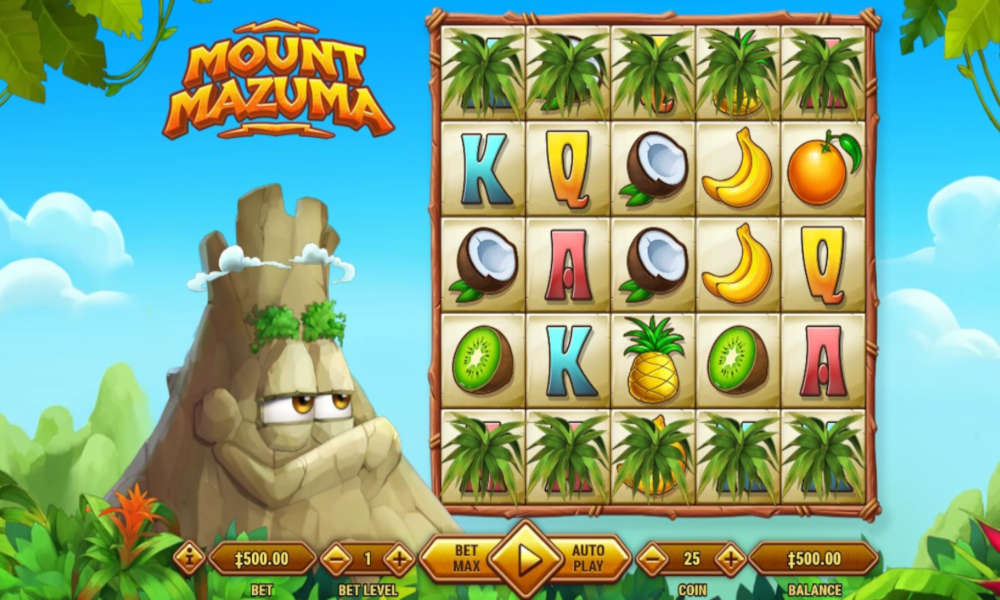 HOW TO PLAY Mount Mazuma?

There are few people in this world who could stay immune to the tropical charm and that’s exactly the card Habanero played on with Mount Mazuma slot. This game is a colourful presentation with a loveable volcano mountain acting as your faithful companion. The mountain has been given human characteristics which add an extra cartoon spice to the overall look and feel.

Mazuma is situated on the left part of the screen whereas the playing grid occupies the right part. There are five rows on the grid with as many reels. However, the topmost and bottom row are covered in palm leaves and will not be activated during the base game.

Below the reels you will find all the standard game commands. You are allowed to choose the bet level – going from 1 to 10, whereas you can also determine the coin value. This starts from 0.01 and goes all the way up to 25. Combining the highest of values in both categories gives you a whopping cost of €5,000 per spin. Fortunately, the spinning starts from as low as €0.20.

This Hawaiian-inspired game is packed with features that you will enjoy and it’s fair to say that it’s much more than just vivid graphics and cool, island music. Wins are achieved for notching up at least three matching symbols on a payline. As for those – there are 243 ways to win, initially. The number goes up but more on that below.

Mount Mazuma slot game is packed with a multitude of exciting features and bonus rounds. It’s a high volatility game with four different levels of RTP. The action starts on a 92.40$ gameplay and moves up to 93.89%, 96.76% and ultimately 97.98 once the volcano erupts – sort of speak.

Extra Wilds – Orange Wild Logo symbols will substitute all regular ones on the grid. However, the Extra Wilds feature can be triggered at random when any two symbols – apart from Wilds and Scatters – will be turned into the Wilds before the payout is rewarded. Quite a nice touch.

Symbol Multiplier Feature – this is another random feature which can be triggered at any spin whatsoever. It will award DOUBLE multipliers to a random number of symbols (all except Scatters). The best thing about this feature is that symbol multipliers are multiplied together.

Unlock Feature – remember those palm leaves? Every time you get a Cocktail Scatter anywhere on the grid, a hidden symbol will be revealed. The unlock feature is only active during the Free Games – and the uncovered symbols will remain as such for the entirety of the feature.

Free Games – off to the free games now. It is easy to guess, this feature is triggered once you get three or more Cocktail Scatters anywhere on the grid. The number of free games is fixed at 10. The feature cannot be retriggered.

Extra Chance! – if you receive less than 5x your bet after free games, Mount Mazuma will treat you with the Extra Chance bonus. This is where all the palm leaves are removed from the grid with Extra Wilds Feature and Symbol Multiplier Feature both active.

Mount Mazuma slot game by Habanero will strike you as a casual video slot you’d play to relax and switch your mind on. Such an assumption could not be further from the truth, however, with this high-volatility product.

Bright colours and fun-looking design does not paint the real picture here. Mount Mazuma is a slot which comes with four RTP values and can be pretty expensive to play. It does include no less than five features which give you plenty of winning potential but you better pay close attention or your bankroll will be dry before you know it.

The best thing about this Habanero product is that it offers a fair chance for players to recuperate their losses with a Last Chance feature. If you include all the multipliers, free spins and extra Wilds, you got yourselves a nice whole package.

WHERE TO PLAY MOUNT MAZUMA FOR REAL MONEY:

Players, we need your help with how we should to rank and rate these reviewed casino games. You can help us by rating this game, and if you really enjoyed playing Mount Mazuma. You can also share it with your friends on Facebook, Twitter and via email. For all freeplay games, if your free credits run out, simply just refresh the page and your balance will be restored.

TRY THESE OTHER Habanero GAMES

Presto!
Presto is an amazing game for any player that is looking for a magic themed game ...
Software:
Habanero
Reels:
5
Paylines:
243 Ways to Win
RTP:
96.60%
Volatility:
High