Muertos Multiplier Megaways is an online slot from Pragmatic Play featuring a Day of the Dead theme. The action plays out on a 6×7 game grid with 117,649 ways to win. Besides the lucrative base game, players can also benefit from multipliers, free spins, and all kinds of interesting features. You can join this famous Mexican holiday for bets from €0.20 to €100 per spin. The game is highly volatile and comes with multiple RTP levels, with the most generous one being 96.03%.

You already know that this Mexican celebration of the dead is extremely popular in gambling. There is a multitude of slots featuring this colourful theme. Pragmatic Play’s Muertos Multiplier Megaways embodies the Mexican culture in a unique and entertaining way while adding progressive multipliers to potentially power up wins.

Players will find themselves in an anonymous Mexican village where they will experience everything this title has to offer. There are colourful houses lining both sides of the grid, with one side featuring a big floating donkey tethered to the roof. A sprinkling of skulls and candles really captures the holiday’s spirit, with a guitar thrumming in the background. Unlike some other Dia de Los Muertos slots out there, Muertos Multiplier Megaways is extremely celebratory, without being over the top.

Join this Mexican fiesta honouring those who have passed away, and you might walk away with some generous rewards. If you wish to know more about this Pragmatic Play slot, keep reading our Muertos Multiplier Megaways review. 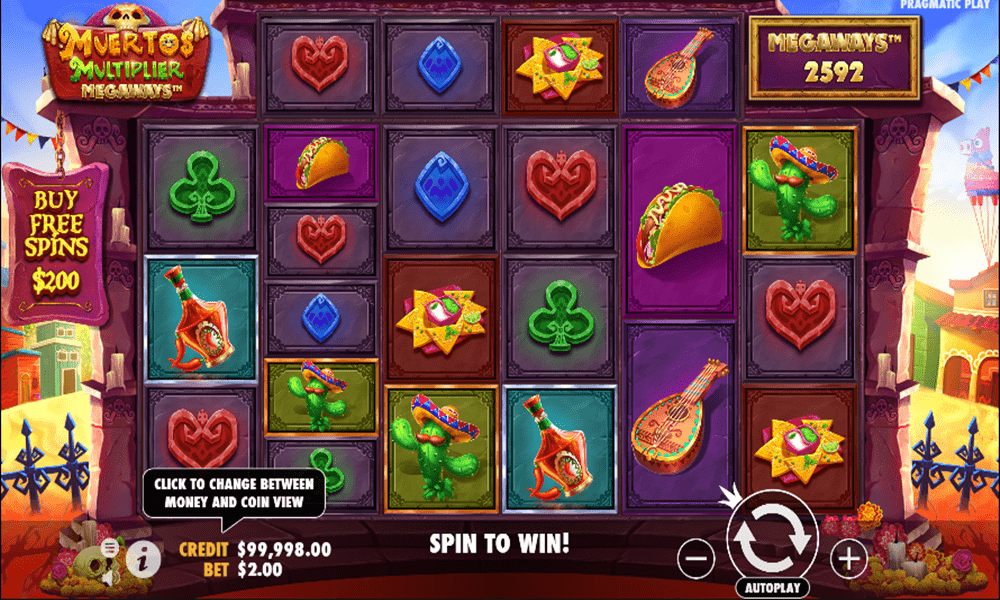 HOW TO PLAY Muertos Multiplier Megaways?

As we have mentioned, you are able to find hundreds of online slots featuring the Day of the Dead theme. Muertos Multiplier Megaways will once again take you to this famous celebration filled with tacos, nachos, and tequila with a few decorated skulls thrown in. However, we are thrilled that Pragmatic Play has not gone overboard with the theme like some other developers tend to do.

Muertos Multiplier Megaways plays out on a grid made up of 6 vertically spinning reels and one horizontally spinning tracking reel. When we consider the four symbols on the top reel, up to 7 symbols can land on each aligned column, offering 117,649 ways to win when fully expanded. The game is highly volatile with a range of RTP settings. If you wish to play the version with the highest RTP, search for the 96.03% one. The game’s betting range will suit all kinds of players, with bets varying from €0.20 to €100 per spin.

When it comes to symbols, there is a total of ten present on the grid. Winning combinations are formed when they land on adjacent reels starting from the leftmost side. Card suits make the lower end of the paytable, followed by guitars, nachos ‘n dip, tacos, cacti, tequila bottles, and skulls. Hitting a six-symbol winning way of suits will award players up to 0.6x the bet, or up to 5x the stake for the premiums. Muertos Multiplier Megaways also features a wild symbol which appears only on the top reel and substitutes for all regular pay symbols.

There are all kinds of interesting special features that will take your gaming experience to a whole new level. Let’s see what they are all about.

If available, players can buy free spins for the cost of 100x the bet. Max win potential of Muertos Multiplier Megaways is capped at 10,000x the stake.

We have to admit we were positively thrilled with Muertos Multiplier Megaways. The slot looks like a typical Day of the Dead release at first glance, however, you will find that the feature department packs some heat! Beautiful visuals are combined with fun and engaging features, that really provide a pleasant gaming experience. Instead of simple wild multipliers featured in many other games, here you have a system where the wild multipliers multiply the already accumulated win multiplier each time. This results in some generous wins, with the multiplier on any given spin. Especially in the bonus round, where you get a more regular progressive win multiplier.

WHERE TO PLAY MUERTOS MULTIPLIER MEGAWAYS FOR REAL MONEY:

Players, we need your help with how we should to rank and rate these reviewed casino games. You can help us by rating this game, and if you really enjoyed playing Muertos Multiplier Megaways. You can also share it with your friends on Facebook, Twitter and via email. For all freeplay games, if your free credits run out, simply just refresh the page and your balance will be restored.

TRY THESE OTHER Pragmatic Play GAMES

John Hunter and the Tomb of the Scarab Queen
The Scarab Queen release is the third part of the franchise which currently has 5 ...
Software:
Pragmatic Play
Reels:
5
Paylines:
25 Paylines
RTP:
96.50%
Volatility:
Medium

Three Star Fortune™
If you want to witness the true appeal of the Orient, we suggest you give Three Star ...
Software:
Pragmatic Play
Reels:
5
Paylines:
10
RTP:
96.27%
Volatility:
High
VIEW ALL GAMES