Mystic Hive is the latest slot to come out of Betsoft’s kitchen. As we all know, Betsoft has a habit of launching slots once or twice a month. Although we would love to see games from this impressive provider more often, we understand that quality requires dedication. And dedication requires time, hence we had to wait quite some time for Mystic Hive. The new slot plays on the theme of the Hive, a popular release from June.

In this new game, we get to light up the reels with fireflies. The two slots have many similarities, but this one is more mystical in nature. The fireflies help you fill the Nectar Meter and occasionally bring in storms with Multipliers. The best thing about the game is the Free Spins mode where you will get if you fill the Nectar Meter. Five extra rounds in the game bring sticky Wilds that boost your balance with each turn.

Mystic Hive comes with 30 paylines which you can use to create winning sequences. The hexagonal grid is quite innovative, and we got the chance to meet it in the Hive. In terms of technicalities, the two games have many similarities, with the main difference being the RTP. In the Mystic Hive, the RTP is 96.13%. You can play this game for only €0.10 per spin. The maximum bet amount is €90. 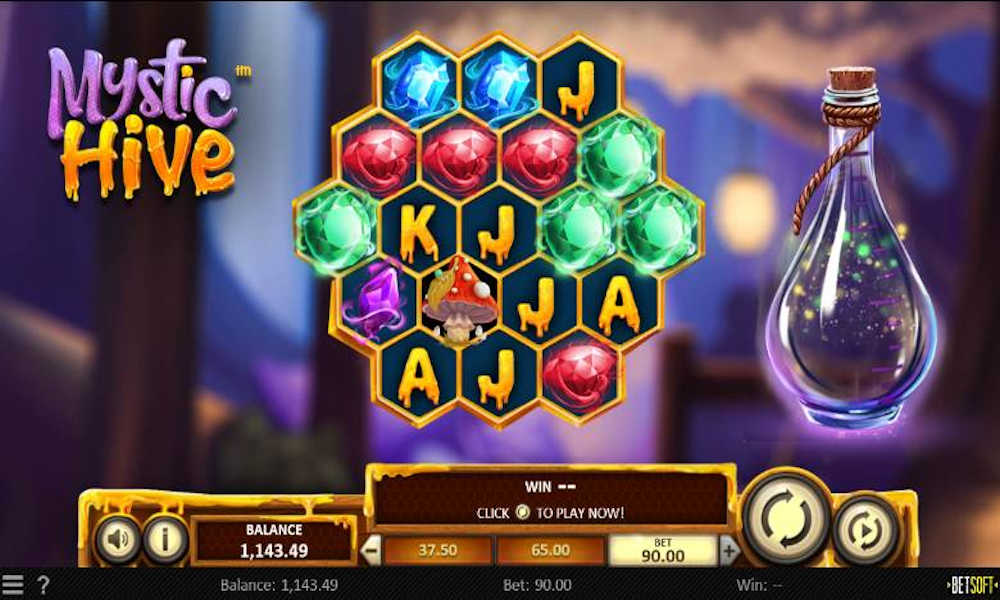 HOW TO PLAY Mystic Hive?

When we first got to meet the Hive, our team unanimously declared it to be one of the sweetest slots that we met in 2020. Two months later, and we are about to meet the game’s sequel. Many elements from the first game appear again here, but Betsoft updated several aspects of the game. When you load the game, the screen shows you a hexagonal grid in the 3-4-5-4-3 sequence. Honey is still a prominent symbol within the game, mostly visible in the special features.

Behind the grid, the background depicts a mystical, magical forest full of fireflies. You won’t have time to focus on them, though – the action is on the reels. From time to time, you will get to meet some fireflies that will fly by the grid and try to boost wins. But what matters more is the compilation of symbols on the reels. The Mystic Hive slot has 10 symbols in total, eight of which are low pay. The low paying symbols include a card royal collection and four colourful precious stones. Shiny stones and honey-dripping card royals can make potent payouts, as the max that you can get is 10x the stake. Higher symbols are a mushroom and the Wild. If you manage to collect 5 mushrooms, you will get 50x the stake prize.

The technical side of the story reveals how Betsoft came to the idea to create this game. Clearly, the theme and the design of the previous game showed Betsoft the potential that is hiding in creating such games. That is why the company decided to make another slot, but also make it better in the process. Mystic Hive is available in all Betsoft casinos with €0.10-€90 betting range. High volatility and 96.13% RTP complete the game.

If you though, the Hive is sweet, wait until you meet the features of Mystic Hive. Let’s see which special features you can find in the new slot.

Mystic Hive is the sequel to the popular the Hive video slot release. Two months after the release of its first hexagonal slot, Betsoft surprised its fans with Mystic Hive. And we will be honest – the game is great. If you liked the Hive, there is no reason to avoid Mystic Hive.

However, the game features two main special features. Free Spins and Spreading Wilds might sound like a mediocre combination, but they have proved to be quite useful. The only issue that we had with Mystic Hive is that it took us over 140 spins to get into the Free Spins mode.

If you want to try out the game, look for it in any major Betsoft online casino. It’s highly volatile, so wins will be rare. The maximum win potential that you can expect here is 243x the stake.

WHERE TO PLAY MYSTIC HIVE FOR REAL MONEY:

Players, we need your help with how we should to rank and rate these reviewed casino games. You can help us by rating this game, and if you really enjoyed playing Mystic Hive. You can also share it with your friends on Facebook, Twitter and via email. For all freeplay games, if your free credits run out, simply just refresh the page and your balance will be restored.

Blood Eternal
Blood Eternal is one of the latest additions to the portfolio of games found at Betsoft ...
Software:
Betsoft
Reels:
6
Paylines:
30
RTP:
95.03%
Volatility:
Medium