Nostalgically built by Northern Lights Gaming for all online casino players craving for good-old land-based times, Niagara Falls is a 5 reel and 20 payline video slot. It promises vintage gaming entertainment in modern surroundings and is available exclusively to at all Yggdrasil-powered gaming establishments.

This game is designed to take you back to 1930s and a genuine casino lobby where you will be tapping the spin buttons on a machine while the gentle saloon music plays in the background.

Niagara Falls online slot comes carrying three different bonus features. With them, you can hope to get free spins, stacked spins and multipliers with a maximum jacpot of 403,600 coins. 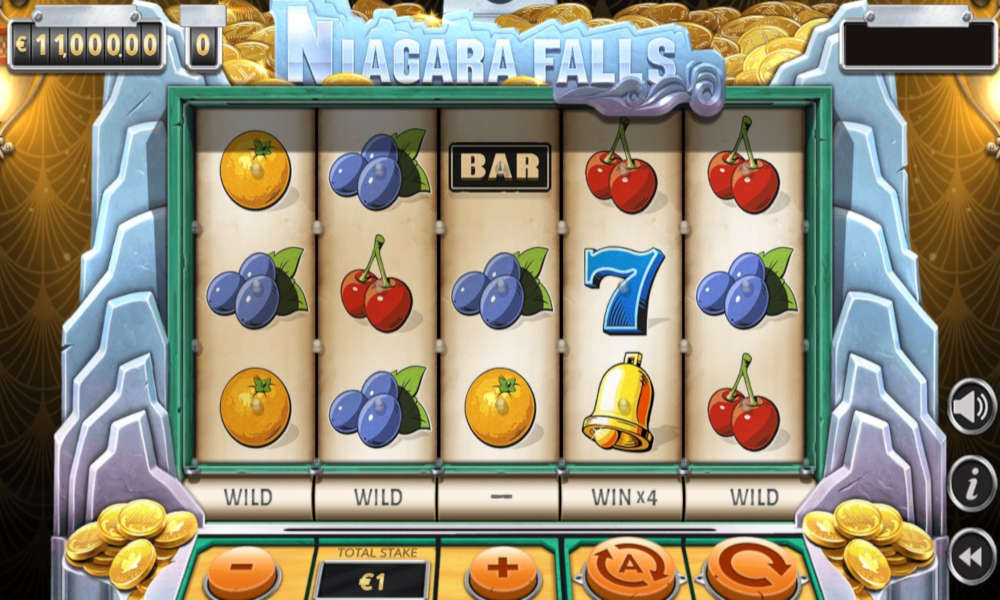 HOW TO PLAY Niagara Falls?

Saloon-styled piano tune is the first thing that will draw your attention after you load the game screen. The Art Deco tapestry in the back provides a breath of elegance as you approach the vintage-looking slot machine. With classic tap buttons for stake values, automated spins and a spin function, Northern Lights Gaming did a wonderful job from the aesthetic point of view.

Being a classic slot machine, it’s only natural that this game will pack some of the traditional symbols on the reels. Lemons, plums, cherries, oranges, bar signs, bells, along with blue and red 7s are there, together with the Niagara Falls logo. You also get an orange wavy Wild sing to benefit from.

The idea is simple – land at least three identical symbols on any of 20 available paylines in order to get a win. You do it from left to right which is the common mechanic in most of the slot games these days. The gameplay is available on all possible devices as this great looking slot is fully optimized. It is also built to fit everyone’s pocket with bet values going from €0.20 to €100.

Niagara Falls online slot game is all about dropping and falling. Well, it’s only natural, isn’t it? The gameplay incorporated adds plenty of spice to a seemingly uneventful classic slot machine. However, you can rest assured that Yggdrasil Gaming are pretty strict and would not put their name under any game. That being said, this particular game boasts a more than engaging gameplay.

Coin Drop Bonus – at the end of every single spin, a gold coin can appear on the last reel. The coin will fall down the reels, leaving a trail behind him, until it lands on a bonus slot at the bottom of the reels. there are five different option you can benefit from:

Niagara Falls Free Spins Bonus – three Bonus Barrels on odd reels will trigger 5 Free Spins. During these complimentary rounds, the bonus slots only have Wild bonus displayed on them. This feature will not give you regular Wilds, but stacked ones covering entire reel.

Cash Fall Bonus – is a randomly triggered bonus. Once you hit it, coins will fall down the reels and land into the slots under the reels. They will be added to the meter found below. There is a particular type of coins – SUPER COIN – which can also appear. It will multiply the slot value by two, thus significantly boosting your potential winnings.

Niagara Falls is an entertaining combination of old and modern. It’s a mixture of vintage casino slot machines and contemporary video slots. This Yggdrasil pearl has all the elements of a great slot – nice graphics, engaging gameplay, plenty of features and a rewarding jackpot.

This game benefits from three main bonus features. These come carrying spinoffs of their own, with particularly spicy mini features. Some of these include free spins, shake options, stacked spins and multipliers.

Yggdrasil were wise to add Northern Lights Gaming to their growing team and we couldn’t be more excited to see what would the next creation be to emerge from the kitchen.

WHERE TO PLAY NIAGARA FALLS FOR REAL MONEY:

Players, we need your help with how we should to rank and rate these reviewed casino games. You can help us by rating this game, and if you really enjoyed playing Niagara Falls. You can also share it with your friends on Facebook, Twitter and via email. For all freeplay games, if your free credits run out, simply just refresh the page and your balance will be restored.

See all of our Slots game reviews where you can play 540 slots games for real money in any of our recommended casino sites.