Nitro Circus is the first-ever branded slot game Yggdrasil Gaming have produced and it’s fair to say the trailblazing slot developer has made some pretty huge waves with its branded premiere and set the industry standards extremely high.

Based on the American hit show that first caught the world’s attention while running on MTV between 2012 and 2014, Nitro Circus grew to become a global phenomenon. It’s all about engaging the action sports collective by travelling around the world and dazzling the audience with their motorbike stunts.

A creatively conceptual product envisioned by Travis Pastrana has been given a wild online slot tribute in a 5×4 game with 25 paylines and an action-packed, high octane gameplay that will bring up to 50,000 coins for a maximum win. 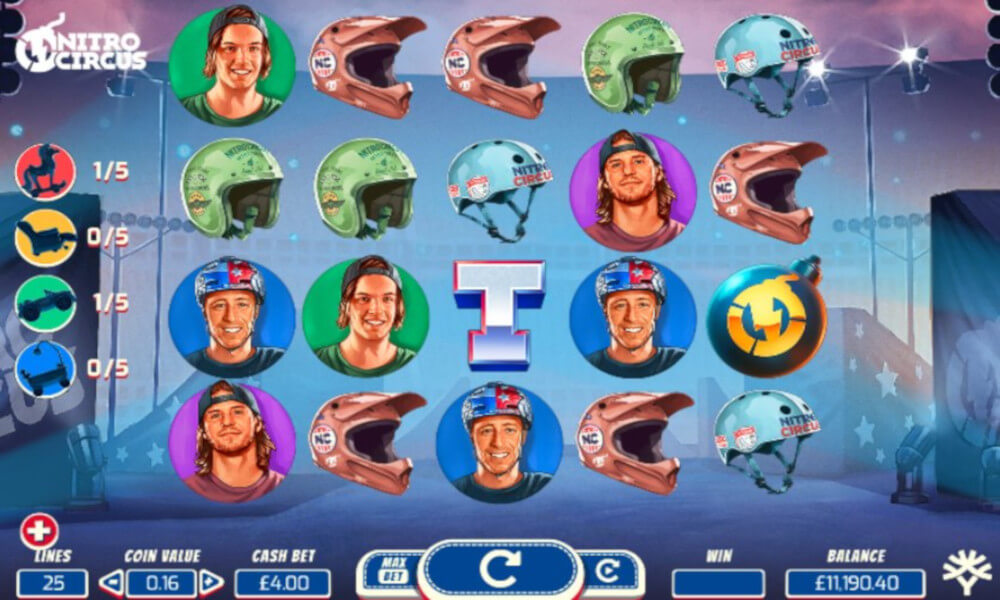 HOW TO PLAY Nitro Circus?

Nitro Circus is bursting with life so don’t feel surprises – or afraid – once the hard-rocking soundtrack hits you straight in the face as you load the game screen. This high-paced action theme slot is rich in colour and sound, which can be a lot to take in at once but it’s well worth the effort.

The 5×4 playing grid is transparent which gives you a chance to enjoy the show going on in hte background while you spin the reels. Before you plunge in, however, make sure to select your desired coin values. The game comes with a wide range of available bets, starting from as low as €0.10 and going all the way up to €125.

In order to win you will need to line up combinations of at least three matching symbols from left to right while at the same time picking up different collectibles that will help you with special features and bonus plays which come in abundance with this fantastic Yggdrasil product.

As far as the symbols go, you get exactly what you’d expect. Those familiar with the show will recognise the guys from the show who represent the high-paying symbols, while the helmets complete the offering as low denominations. Nitro Bomb symbol is the game’s Wild while N, I, T, R, O letters appear across all five reels in that exact order to boost the adrenaline to the maximum. More on that below.

Yggdrasil Gaming have already established a reputation of slot specialists and game innovators and Nitro Circus is just another proof of how ingeniously creative their backdoor kitchen actually is. Not only did Yggdrasil make sure their branded debut was visually appealing and incredibly detailed but they also ensured this right here is one of the most exciting games this year. It’s a remarkable combination of the classic slot game mechanics working in symbiosis with a more advanced gamified model that takes you through thoroughly immersive bonuses.

Nitro Blast – this feature is activated by landing exactly 2 Nitro Bomb symbols during the base game. Players will be taken through a mini game in which players will get to choose one of five bombs and be rewarded with corresponding prizes which are as follows:

Nitro Free Spins – landing another Nitro Bomb – and having 3 at least – during the base game at once will initiate the Free Spins bonus. Not only will you get complimentary spins but you will also have the Nitro-Blast mode active with up to three picks available:

Feature picks are same as in the feature above (Nitro-Blast Minigame) which means you get you choose from extra free spins, multipliers and further Wild symbols.

Vehicle Collection – once you load the playing screen, Nitro Circus will reward you with a vehicle that will be added to the collection meter on the left side of the screen. And just in case you were wondering what that was all about – here is the answer. You need to collect 5 identical vehicles in order to trigger the Nitro Jump feature which you will go through with that particular vehicle –bath tub, armchair, toy car or a rocking horse.

Nitro Jump – this feature is either collected by collecting 5 vehicles through the gameplay or by being lucky enough to land all five letters to come up with NITRO word written on the reel grid. You are then awarded three stunt jumps and 1 Final Boost Jump. These three are scored by the judges whereas you also get to pick different coin values and prizes in the air – 25 coins, speed boost for the final jump, final jump multiplier and 10 free spins. When it comes to the final jump you need to be careful not to give it too much speed as you can crash and lose all multipliers.

Yggdrasil Gaming have really made a statement with their branded slot debut. As ambitious and complicated as it may seem – and be for that matter – Nitro Circus is a remarkable slot and definitely a different kind to all games we’ve seen thus far.

Even though it can come across as a bit of a messy congestion – just like the Nitro Circus show itself – this fantastic game is easy to play and enjoy in. Yggdrasil want to make it as action-packed and crazy as possible and it’s fair to say they’ve done it.

Nitro Circus online slot is an adrenaline-rushing product which will keep you on the edge of your chair throughout with its jumps, explosions, free spins, multipliers and an incredibly immersive gameplay all around.

WHERE TO PLAY NITRO CIRCUS FOR REAL MONEY:

Players, we need your help with how we should to rank and rate these reviewed casino games. You can help us by rating this game, and if you really enjoyed playing Nitro Circus. You can also share it with your friends on Facebook, Twitter and via email. For all freeplay games, if your free credits run out, simply just refresh the page and your balance will be restored.