Pachamama slot is an Incan-themed 5-reel slot with 25 paylines and 96% RTP by Endorphina. Doused in Expanding Wilds and Bonus games, the Pachamama slot brings adventure and excitement straight to your desktop and mobile screens. Endorphina made the game fit all criteria when it comes to online casino gaming – it has great features, top design, and solid payouts. The maximum you can win within the slot game is 10,000 coins. In our Endorphina Pachamama slot review, we divulge many other secrets hidden in the Andes’ ancient jungle.

The supplier inserted a wealth of innovative modifiers and features in its Pachamama online slot. One of the main features is the Expanding Wild, which has the power to shape your bankroll both in base and bonus mode. Chakana Bonus round gives you a shot at increasing winnings thanks to multipliers. In the end, you can increase the win up to 357x if you reach the Gold Chakana Bonus round.

Although not progressive, the Pachamama manages to keep the energy high with the combination of 96% RTP and high volatility. Plus, you have a wide betting range of €0.01-€250, which you can tinker with using Bet and Denomination options. Moreover, Endorphina lets you choose how many paylines you want to use – with a maximum of 25 to only 1 per spin. The game might not offer Free Spins, but it certainly gives you enough opportunities to enjoy the mythologically themed slot. For more details, keep reading our review below. 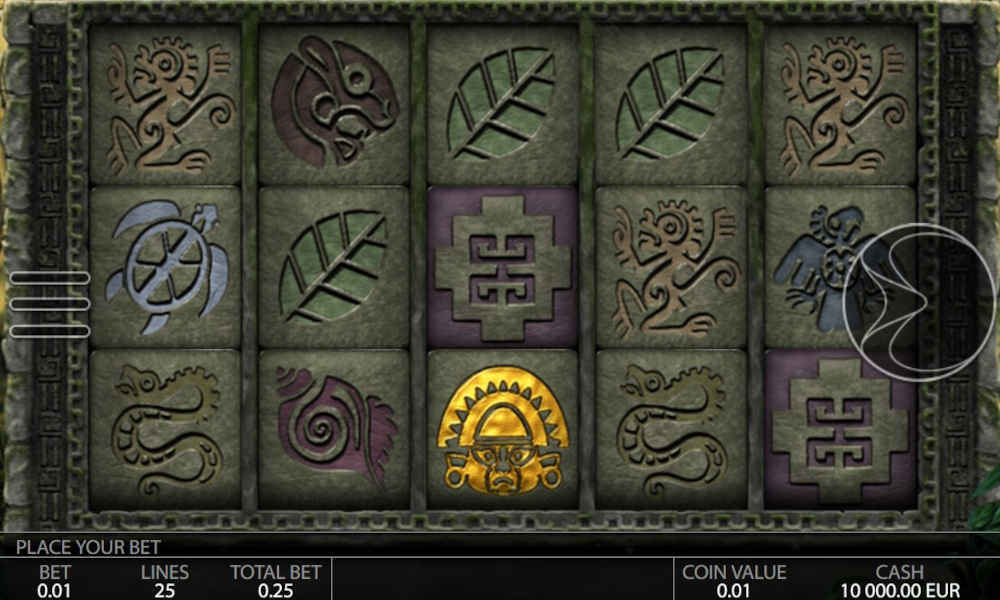 HOW TO PLAY Pachamama?

Mythology often equals mystery in online video slot making. The software supplying companies are always on a prowl for intriguing themes, and nothing says ‘intrigue’ like the ancient mythology of South America. Home to some of the greatest civilizations, the Andes provide ample material in cultural heritage and religion. And Pachamama is the mother of the deities revered by indigenous peoples there. As one of the most powerful goddesses, she reigns over this Endorphina slot. You will have a blast while spinning the 5 reels and 3 rows filled with ancient symbols. Leaves join animals like monkeys, birds, snakes, and turtles to create a potent cocktail of stone tiles. The main icon is the Chief, a gold-engraved tile also acting as a Wild. The final tile to mention is the Bonus one which activates the Bonus round.

The icons are meant to be confusing – it’s ancient mythology set in a jungle, after all – but by the time you hit the reels for the fourth or fifth time, you’ll start distinguishing them. And distinguishing them is vital because that will tell you how much and why you’ve won the sum (or lost a wager). You don’t have to worry about winning, as there’s nothing you can do to affect the reels. The only task you have is to spin the grid and hope for a fruitful combination. As we mentioned, the game is a 5×3 layout slot featuring 25 lines. In other words, there are 25 ways to win! Players will be pleased to know that the RTP rate comes high, in the form of the typical Endorphina fashion – 96%.

Volatility remains high throughout the game, so don’t expect Pachamama to be generous often. When she decides to be generous, she will be – quite so. The maximum payout within the game is 10,000 coins. To win a portion of this dazzling sum, you can wager between €0.01 and €250 per spin. Plus, you can change the number of paylines you want to use within the game. The minimum limit is 1 payline, and the maximum is obviously 25.

The adrenaline-fueled video slot features amazing details and graphics, but nothing compares to the amazing features. Here are the best game features in the Endorphina Pachamama video slot.

Mystery, ancient ruins, and jungles – that smells of Lara Croft, right? Well, wrong! It’s Endorphina’s magnificent video slot Pachamama, a tribute to South American mythology. Pachamama, the powerful goddess, is here to grant you up to 10,000 coins, so don’t miss this chance.

The game comes with one big feature that consists of two phases. The first phase is the Chakana bonus, where you can get multipliers or seek entrance into the Gold Chakana feature. If you reach the Gold entrance, you can click on stones to reveal magnificent wins, but be careful – there are snakes. The Dark snakes stop the feature.

The game has five reels and three rows, making it a great slot for those who like standard layouts. Moreover, the supplier inserted 25 lines, but you can use as many as you like (1-25).

WHERE TO PLAY PACHAMAMA FOR REAL MONEY:

Players, we need your help with how we should to rank and rate these reviewed casino games. You can help us by rating this game, and if you really enjoyed playing Pachamama. You can also share it with your friends on Facebook, Twitter and via email. For all freeplay games, if your free credits run out, simply just refresh the page and your balance will be restored.