Penguin City online slot is an Asian themed game with a spicy twist only innovative and creative developers such as Yggdrasil could think of. This 5 reel and Win All Ways casino slot is a proper feast for all senses with its unorthodox culinary subject.

Players are tasked with helping poor penguins escape the clutches of the mighty Penguin Emperor who is keeping these underlings as slaves in his Asian restaurant. In addition to looking absolutely stunning with its top-notch cinematic graphics, Penguin City slot game is also quite an eventful adventure.

You can hope to land wins going over 1,500x your bet thanks to features such as the Penguin Espace Mode and Emperor Stacked Wilds which move down one row per spin – thus boosting your chances of grabbing consecutive payouts. 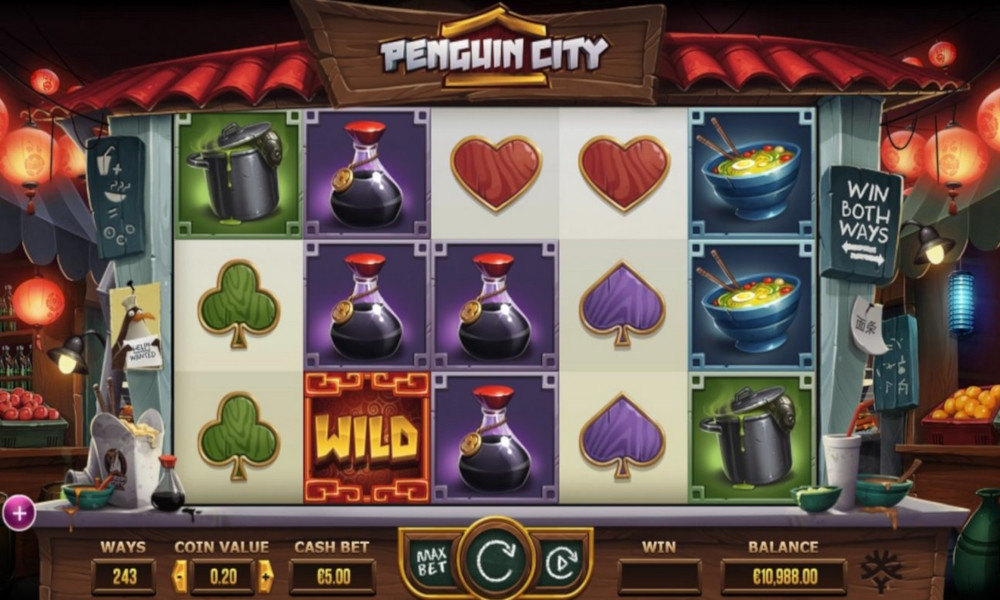 HOW TO PLAY Penguin City?

With Yggdrasil it’s sometimes hard to say whether you’re inside a movie, a genuine computer game or a casino slot. Penguin City is no different with its superb movie-like snippet as an opening scene and dynamic setting behind the reels where penguin cooks are going up and down a (rather dirty and messy) kitchen as you keep spinning the reels.

The 5×3 reel set is placed on top of a counter with bugs strolling over it and flies hovering around hot dishes dripping over the counter on each side of the playing grid. Spectacular graphics is what Yggdrasil are renowned for and this latest title of their truly upholds it.

Below the countertop you will find all of the game controls. Make sure to select the coin value and/or hit the Autoplay button if that’s your cup of tea. Once you have it all set according to your preferences, you will be able to enjoy in the Win Both Ways mechanics which significantly boost your chance of hitting frequent wins.

With 243 different ways to win, this highly affordable slot will have a great appeal knowing that even the most enthusiastic of beginners will find their place anywhere between €0.10 and €125 in the coin value range.

With it being a Win Both Ways game with no less than 243 ways to win, Penguin City is still a regular slot game in which you need to line up at least three matching symbols to land a win. There are, however, a few special symbols and features to help you win big and bigger as one would expect from a Yggdrasil.

Wilds – represented as a simple ‘wild’ logo, this symbol is here to replace all other symbols in a possibly winning combination. Once a part of a win, these Wild symbols will not only go on fire – literally – but will also remain sticky for the next spin. MInd you, these symbols appear only on reels 2 and 4 but that’s more than enough,knowing a win on any wild base game run will trigger the Penguin Escape Mode.

Penguin Escape Mode – as visually engaging as possible, this particular feature is a game inside a game. The players will be transported into a completely different setting with shelves around the reels and penguins waiting to be sent either onto the reels or into a packing machine of sort.

Each spin you make during this mode, there is a penguin that will try to escape. Those that manage to do so will automatically add a wild on a winning spin or they wil alternately create a winning combo off a losing spin. You will be getting re-spins as long as you keep winning with this mode ending when there are no wins left.

Stacked Emperor Wild – The fearsome Emperor will appear as a stacked wild filling up the third reel during the Penguin Escape Mode. This knife wielding fella will guarantee winning combinations and that’s the best thing about it. The Stacked Emperor Wild moves down the reels one row per each spin until he disappears from the reels and penguins dare not escape while he is on the reels. Yes, he is that scary.

Yggdrasil have put quite an effort in creating an elaborate slot with their Penguin City. It’s a rather beautiful game from a visual point of view – which normally is always the case with this slot developer. Apart from being awesome looking, this product is also fantastic on the inside.

One might think there’s plenty of going on in there but the truth is Penguin City is quite a simple game to play. It focuses on sticky wilds, respins and stacked, walking wild appearing on the middle reel.

This game wins both ways and has no less than 243 different ways to win which makes it particularly interesting. It is quite an affordable slot too, with a wide betting range and a tantalising jackpot worth over 1,500x your bet.

WHERE TO PLAY PENGUIN CITY FOR REAL MONEY:

Players, we need your help with how we should to rank and rate these reviewed casino games. You can help us by rating this game, and if you really enjoyed playing Penguin City. You can also share it with your friends on Facebook, Twitter and via email. For all freeplay games, if your free credits run out, simply just refresh the page and your balance will be restored.

Age of Asgard
The time for heroes has come! Age of Asgard is the latest gem to come from Yggdrasil’s ...
Software:
Yggdrasil
Reels:
5
Paylines:
40
RTP:
96.30%
Volatility:
Medium