Rasputin Megaways is another Megaways slot from Big Time Gaming. The game plays out on 6 reels and differs from other typical slots featuring this slot mechanic. Namely, Rasputin Megaways offers up to 1 million ways in the base game. The number grows even higher with the bonus round, providing nearly 2,985,984 ways to win.

Rasputin Megaways slot is inspired by the Russian mystic and self-proclaimed holy man. In addition to the staggering number of winning ways, players can also benefit from the Rasputin Wilds which add symbols to the reels for more ways to win. It also features two free spins rounds with the Big & Strong free spins benefiting from Extending Reels. Alternatively, the Ecstasy & Fire free spins benefit from increasing multipliers.

This Big Time Gaming title features a high 96.68% RTP rate and comes with a max win potential of 68,180x the stake. Rasputin Megaways is available across all devices and offers a betting range of €0.10 to €20 per spin. In addition, BTG classifies the game as highly volatile, meaning that the players are truly in for an interesting gaming session.

When you think about Rasputin, you are probably thinking about a stern, holy, well-known figure from Russian history. However, Big Time Gaming decided to focus on portraying this character as a well-groomed disco star, ready to bring the party to the reels. If you are into disco, partying and historically inaccurate portrayals, then this is the slot for you! If you wish to know more, keep reading our Rasputin Megaways slot review. 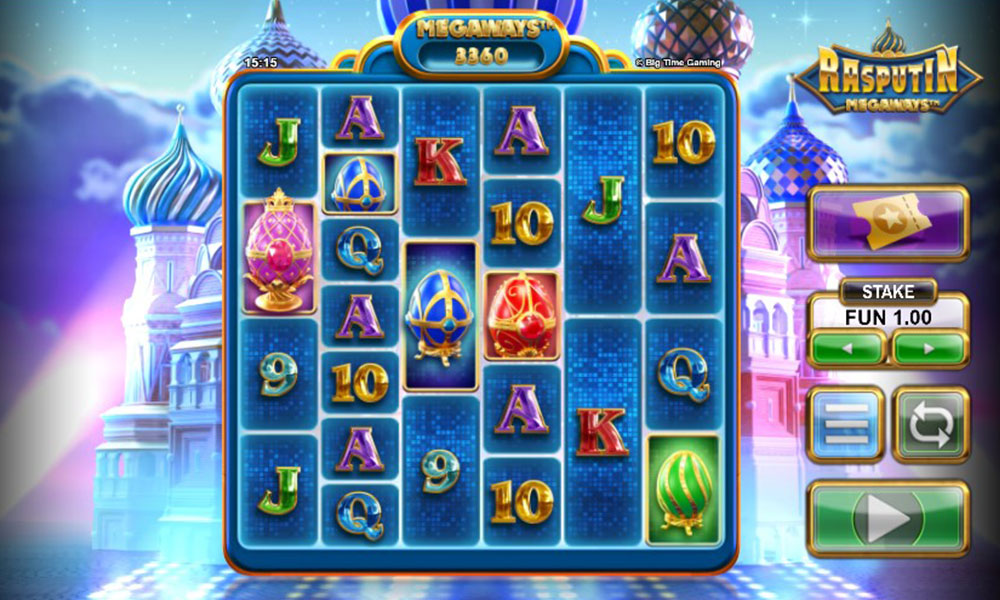 HOW TO PLAY Rasputin Megaways?

As you might have guessed, Rasputin Megaways takes place in Russia, in the centre of Red Square in Moscow. With its bulbous roofs, the Saint Basil’s Cathedral you will see in the background is definitely one of the most recognizable buildings in the country. The place is illuminated by flashing lights, and spotlights, with hardcore disco cranked up when you make it to the free spins round.

As we have mentioned, the game differs slightly from other Megaways games from BTG, such as Outlaw, or Max Megaways. The action in Rasputin Megaways plays out on 6 reels with up to 1,000,000 Megaways in the base game. Every reel contains up to 10 symbols each. Thus follows – the more symbols per reel, the more ways to win.

Before you start playing the Rasputin Megaways slot, you must place your bets. The bet sizes range from €0.10 to €20 per spin. The game features a single return to player value of 96.68%, which is slightly above the industry’s average. The provider has rated the game as highly volatile, promising players a thrilling gaming experience.

We have already mentioned that this title offers up to 1 million ways to win, however that number can grow as high as 2,985,984 in the bonus round. The game’s 6 reels can hold a minimum of 2 symbols and a maximum of 10 in the base game, 12 in free spins. When it comes to the paytable, on the lower end you have the standard 9-A card tiles awarding up to 0.9x the stake for a six-of-a-kind or 50x the stake for a six-of-a-kind premium jewellery egg win.

When the Rasputin Wild lands, it reveals a number. The number is equal to the number of symbols added to the reels, which can go to 48 in the base game, or 60 in free spins. The wins are evaluated once the symbols are added. Rasputin Wild also substitutes for all symbols, except scatters.

When you land 3 or more scatters, you get to choose from one of the bonus rounds. These are:

If available, players can also buy their way into the free spins round. For 100x the bet you can buy the 7, or the 10 free spins options.

Whatever you are expecting from a slot called Rasputin Megaways, this was probably not it. Instead of featuring a dark and foreboding theme, the game is an explosion of bright flashing lights, bopping tunes, and a flippant attitude. However, when it comes to the math of the slot, things are starting to get serious. The game comes with some sweet special features such as Rasputin Wilds and two free spins bonus rounds. The game also offers up to 1 million Megaways in the base game, rising to 2,985,984 in the bonus rounds. Furthermore, the max win potential is pretty generous as well, awarding up to 3,200x in the base game, and 68,180x the stake in free spins.

Rasputin Megaways is definitely a game you should give a chance. It is a well-rounded slot machine with Big Time Gaming combining old as well as new elements to provide a unique and thrilling gaming experience. If you are still on the fence, we recommend you try out the Rasputin Megaways demo play and see what this online slot has to offer.

WHERE TO PLAY RASPUTIN MEGAWAYS FOR REAL MONEY:

Players, we need your help with how we should to rank and rate these reviewed casino games. You can help us by rating this game, and if you really enjoyed playing Rasputin Megaways. You can also share it with your friends on Facebook, Twitter and via email. For all freeplay games, if your free credits run out, simply just refresh the page and your balance will be restored.

Book of Gods
Book of Gods is a thrilling game that takes players back in time where they can enjoy ...
Software:
Big Time Gaming
Reels:
5
Paylines:
243 Ways to Win
RTP:
96.35%
Volatility:
High