NetEnt Reef Raider slot is a marine-themed slot with 7 reels, 7 rows, and cluster paylines. Reef Raider takes you straight to the ocean floor to collect seashells and jewels. Discover colourful characters and amazing rewards in this cluster pay slot and win big! Reef Raider online slot pays up to 8,500x the stake, a perfect win potential for all those who enjoy water sports. We found many exciting features in the game, and we are beyond excited to show them off to you. Read our full Reef Raider slot review for more details.

One thing that you’ll find interesting is the game’s collection of features. NetEnt’s Reef Raider has six boosters that activate either randomly or with the help of game symbols. The underwater pirate adventure includes Anchor Drops, Mystery Chests, Free Spins, Cannon Blasts, and Mystery Overlays. The main game attraction is the Free Spins mode, but you will have a blast with Random Wilds. Don’t miss a chance to score big as you stand to gain quite a big prize!

Reef Raider is, like we mentioned, a cluster pay game. That means you don’t have paylines but rather collect clusters of 5 icons adjacent to the grid to win. The highest RTP rate that you can get is 96.10%, and a hit frequency of 32.60% completes it. The game variance is high, so don’t expect the wins to come too easily. Reef Raider is available for real money play at all NetEnt casinos online for only €0.20 stake per spin. 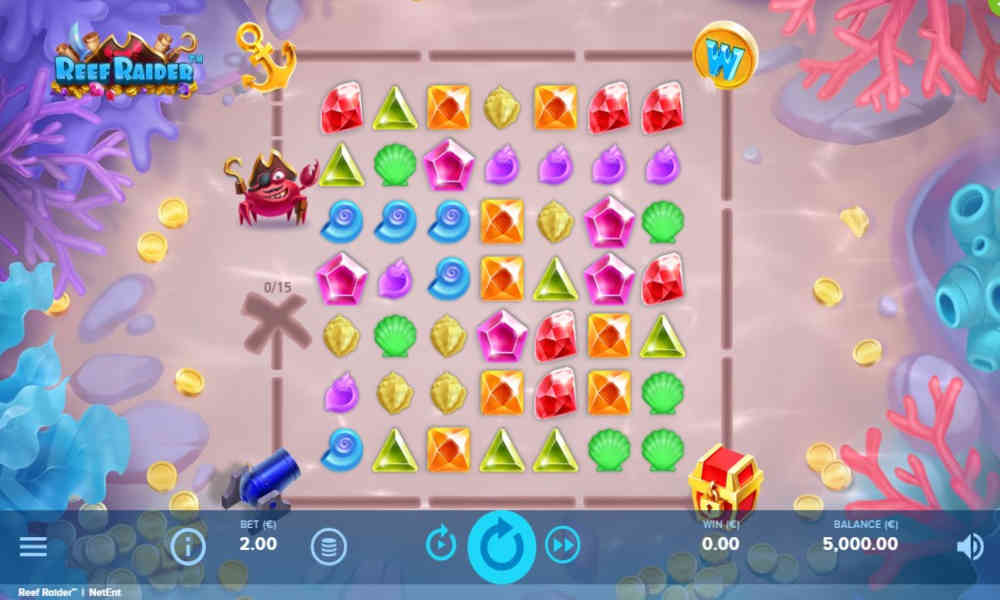 HOW TO PLAY Reef Raider?

We all love underwater slot games, mainly when they feature unique characters and a goofy, cartoonish vibe. And there was no way to avoid loving Reef Raider online slot. It’s a perfect blend of fun, quirkiness, and potential. The game’s theme covers two topics – pirates and the ocean floor. However, the pirates aren’t your usual bunch. Instead, the main pirate is a crab – who reminds us of Sebastian from The Little Mermaid a lot! Besides this pirate version of Sebastian, the game includes a cast of seashells and gems. The seashells are low-pay icons, while gems act as high-pay icons. The red ruby has the highest worth, while the green shell is the lowest on the scale. Besides these symbols, the game also features Wilds, but there are no Scatters. Instead, collecting Wilds through wins builds the Treasure Trail and activates features.

Overall, the game design and visuals are outstanding. Colourful symbols, a great soundtrack, and a dashing backdrop portraying a coral-packed ocean floor are a great look for this summer release. Reef Raider came out in August 2021, so it having an underwater theme is a great move by NetEnt visionaries. Once again, they’ve shown why they are some of the best experts in the business of slot making, as they’ve combined good looks and a stunning collection of features to appeal to the players.

Reef Raider online slot is a cluster pay slot, so to play, you don’t need to complete winning patterns. Instead, you only need five icons touching each other on the grid. The grid has a 7×7 layout, and a cluster of 5 is relatively easy to land – but there are obstacles, such as high variance! Moreover, the game’s RTP of 96.10% is a great start for the punters who love that pay fairly. NetEnt also incorporated an 8,500x the stake payout potential, but it’s guarded by high volatility. To play Reef Raider for real money at NetEnt casinos, you have to wager at least €0.20 per spin. The slot is playable on all devices, including mobile and desktops.

When it comes to features inside the NetEnt Reef Raider slot, your main thing to keep in mind is the count of Treasure Trails. This is because they are used as the basis for all other features inside this underwater pirate game.

Half a dozen features, excellent payout potential of 8,500x the stake and 7×7 grid with cluster pays? Yes, sir! The NetEnt Reef Raider slot is certainly not something you want to miss. This game combines beautiful mechanics, excellent features, and a cast full of seashells that you will love collecting.

It was hard to pick a favourite feature, as the game both offers abundance and variety. They are all fun and offer something not seen often – sans Scatters; you have to rely on collecting Trail bars along the coast of the grid.

WHERE TO PLAY REEF RAIDER FOR REAL MONEY:

Players, we need your help with how we should to rank and rate these reviewed casino games. You can help us by rating this game, and if you really enjoyed playing Reef Raider. You can also share it with your friends on Facebook, Twitter and via email. For all freeplay games, if your free credits run out, simply just refresh the page and your balance will be restored.

Aloha! Cluster Pays
Players should get ready for a visit to a tropical paradise when they access Aloha! ...
Software:
NetEnt
Reels:
6
Paylines:
N/A
RTP:
96.42%
Volatility:
Medium