Remember Gulag is one of the more controversial online slots coming from the Nolimit City studio. We have seen all kinds of themes in their slots so far, however, this release really takes the cake. The slot is a highly volatile game that comes with 6 reels and offers up to 614,656 ways to win. Players will benefit from all kinds of features, including the xSplit, xNudge, and xWays mechanics. In addition, there are also 3 Gulag Spins bonus rounds that can lead to up to 30,000x payouts.

So, why is Remember Gulag controversial? The game draws inspiration from the system of labour camps that existed in the Soviet Union during the war. For many, they were a one-way ticket. This theme is pretty deep and heavy to be featured in a slot. However, Nolimit City does not shy away from unusual stories. Judging from the home screen message: “Those that fail to learn from history are doomed to repeat it,” we guess that the developer does have a point to make. Nolimit City has chosen to use Remember Gulag as a historical reminder. In addition, the developer plans to donate a portion of the game’s profits to Humanitarian Assistance.

Nolimit City’s Per Lindheimer says: “A slot provider can’t change the course of the current events, but if we in some way can help and make a difference for the war victims, then let’s make sure to do so.”

Remember Gulag will probably not appeal to a wide audience, however, if you do wish to know more about this unusual online slot, keep reading our Remember Gulag review. 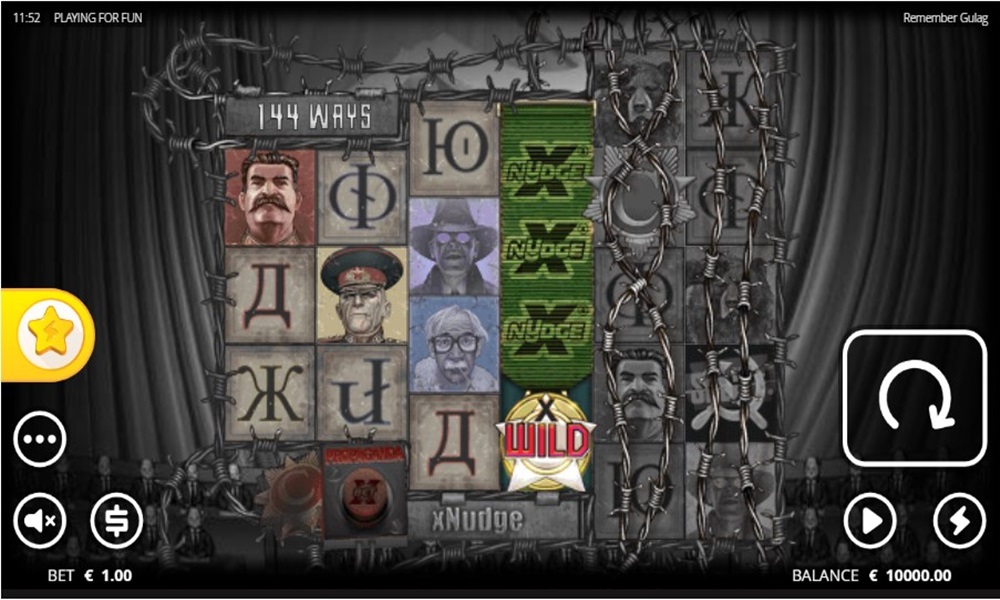 HOW TO PLAY Remember Gulag?

Visually, Remember Gulag looks pretty grim. It is designed as a black and white show, with the screen looking monochrome aside from a splash of muted colour here and there. The grid, laid out in a 3-3-4-4-5-5 formation is surrounded by barbed wire, while the national anthem blasts across the airwaves. The theme really does represent a conundrum difficult for the mind to fully grasp. At the start of each base game spin, reels 5 and 6 are locked. Landing one scatter unlocks reel 5 while landing another unlocks reel 6. When all these reels are open, you can have up to 614,656 ways to win.

Let’s detach a bit from the gloomy atmosphere and look at the numbers. When it comes to the RTP, it can be either 96.08% or 94.37% when playing naturally. Winning combinations require at least 3 matching symbols and feature a hit rate of 22.56%, while the bonus hit rate is 1 in 211 spins. As expected, volatility is cranked to high, with Remember Gulag slot being available for players for as little as €0.20 to €100, across all devices. Additionally, players can engage the Propaganda Bet, which will increase the cost by 20%. In return, they are guaranteed a scatter on reel 2, thereby unlocking reel 5. According to Nolimit City, this way you get ‘more brutal, but less awarding base game and increase the probability of triggering Gulag Spins.

Talking about the paytable, players will see the Cyrillic style 10-A royals as the lower value symbols which award up to 3 times the stake for a six of a kind. Next, there are the five premiums, with Stalin as the top-tier symbol offering 6x the stake.

Overall, the Remember Gulag slot offers a max payout of up to 30,000x the bet. With such a payout on offer, Nolimit certainly lives up to its name. The game is packed with features and a unique theme that will definitely leave players out of breath. Not a lot of studios are creative and, shall we say, brave enough to include such a theme in one of their slots. However, even though Nolimit City has never shied away from coming up with all kinds of questionable slots, many will wonder if they went too far this time.

WHERE TO PLAY REMEMBER GULAG FOR REAL MONEY:

Players, we need your help with how we should to rank and rate these reviewed casino games. You can help us by rating this game, and if you really enjoyed playing Remember Gulag. You can also share it with your friends on Facebook, Twitter and via email. For all freeplay games, if your free credits run out, simply just refresh the page and your balance will be restored.