Retromania slot is a 5×3 video slot with 9 paylines and 96% RTP by Endorphina. For the creation of this slot, Endorphina took inspiration from vintage and old-school video games. Reminiscent of the most vivacious decades of the 20th century, the Retromania video slot brings on retro fun to your desktop and mobile screens. It’s available in all Endorphina casinos – you just need to know where to look for it. Best Casinos Retromania slot review reveals all interesting details about the game, including payouts and features.

Speaking of features, we have to say that we expected Free Spins, but Endorphina was not having it. Instead, it decorated the vintage-themed slot with a fun and entertaining Bonus game – a 3-round wonder where you can get up to 300x the stake! Wilds are also an integral part of the adventure, besides the feature-triggering Scatter. There are no Free Spins, but you certainly won’t need them. The classic Endorphina feature present in every single release, Risk Game, is active here as well.

The technical side of the game is superb. You get a reel setup with 5 reels, 3 rows, and 9 paylines. In other words, you have nine ways to win in this nostalgic-inspiring video game! As per usual, the RTP is 96%, something we’ve seen in every slot by this provider. We are not sure about volatility, but it should be medium-high. The maximum payout amount is 50,000 in total. The payout comes from the maximum win of 300x the stake in the Bonus round and typewriter’s max payout. For more information about the game, keep reading our Retromania slot review below. 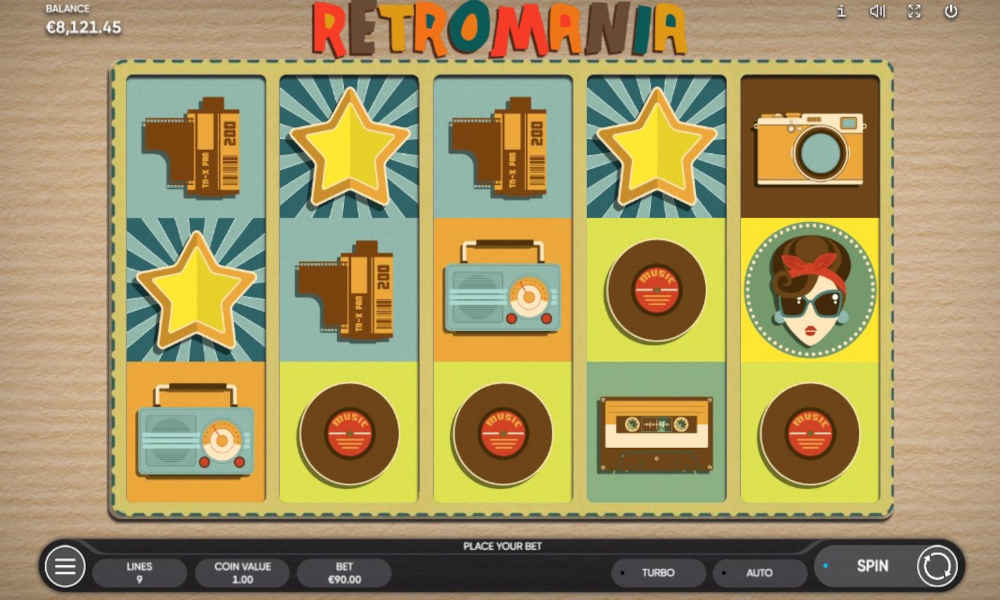 HOW TO PLAY Retromania?

Retromania is a classy video slot, so you won’t need a real guide for playing Retromania for real money. Instead, we offer a guide into its technical and payout information, as well as game features. We’ll start from technicalities – the reels, more precisely. The game holds five reels and three rows. The reel setup uses a 9-line payout system, so there are nine ways to win in total. To get a win, you will have to match at least three icons on a winning payline. If you match four or five (the maximum number), you will get a higher payout.

Now, the betting system is a marvel. This supplier lets you wager between €0.01 and €90. The highest wagering amount is not a surprise for the company’s loyal fans, as we’ve seen it in several games already. The same thing applies to the smallest limit. However, you have an option to adjust three components of the total bet. First, you can pick the number of paylines you want to use in the game. The max is 9, but you can between 1 and 9. Coin value helps you tinker with the bet better, as well as the total bet. That’s how you get an impressive wagering range of €0.01-€90.

And now, let us talk about visuals. First of all, the game uses a vintage theme, which means you are about to see more than one blast from the past. Retromania slot is destined to give you so many throwbacks, including antique typewriters, vinyl records, old phones, film, cassettes, a radio, and a Polaroid. The main symbol is the typewriter, and together with the girl, it brings you the highest payouts. This girl is the only character within the game. The typewriter can reward you with 50,000 coins that you get after you score 5 of a kind. As you can guess, a unique soundtrack plays in the back while you spin the funky reels. Endorphina’s game is fully accessible on all devices, including mobile and desktop. You can access the game in every Endorphina casino, including the top recommendations below.

Retromania slot does not offer extensive winning chances, thanks to its 9 paylines. There are no Free Spins, either! But do not despair; there is the Bonus round to win up to 300x the stake. Let’s see how!

Retromania, the 5-reel vintage online slot, is one of the cutest Endorphina slots we’ve seen so far. It has it all – a nice theme, a great soundtrack for the adventure, and great paying possibilities. What more to ask for?

The game lacks free spins, which might be a turn off for some players. But worry not, there’s something to pique your interest. The game has a Bonus game which gives you a chance to score up to 300x the stake! Not only that, but it’s always followed by a Risk game, a recognizable Endorphina slot feature.

The game offers you up to 50,000 coins as the maximum payout, which is great considering the maximum bet is €90. The slot is live in all Endorphina online casinos worldwide. We hope you liked our Retromania slot review – stay tuned for more info on other Endorphina games.

WHERE TO PLAY RETROMANIA FOR REAL MONEY:

Players, we need your help with how we should to rank and rate these reviewed casino games. You can help us by rating this game, and if you really enjoyed playing Retromania. You can also share it with your friends on Facebook, Twitter and via email. For all freeplay games, if your free credits run out, simply just refresh the page and your balance will be restored.