The story of Robin, a heroic outlaw – needs little introduction. A highly popular theme in popular culture, one of the outstanding elements of the English folklore has been given a brilliant slot game incarnation thanks to Microgaming.

Robin of Sherwood is a 5 reel video slot with 243 ways to win which brings forth beautiful graphics and an equally impressive gameplay. Vibrant – both in colour and sound – this title offers promise of great fun and potentially lucrative winnings.

The likes of Wild Turning Feature, Royal Clearing Feature and universally loved Free Spins is most certainly more than enough to guarantee the aforementioned premise. 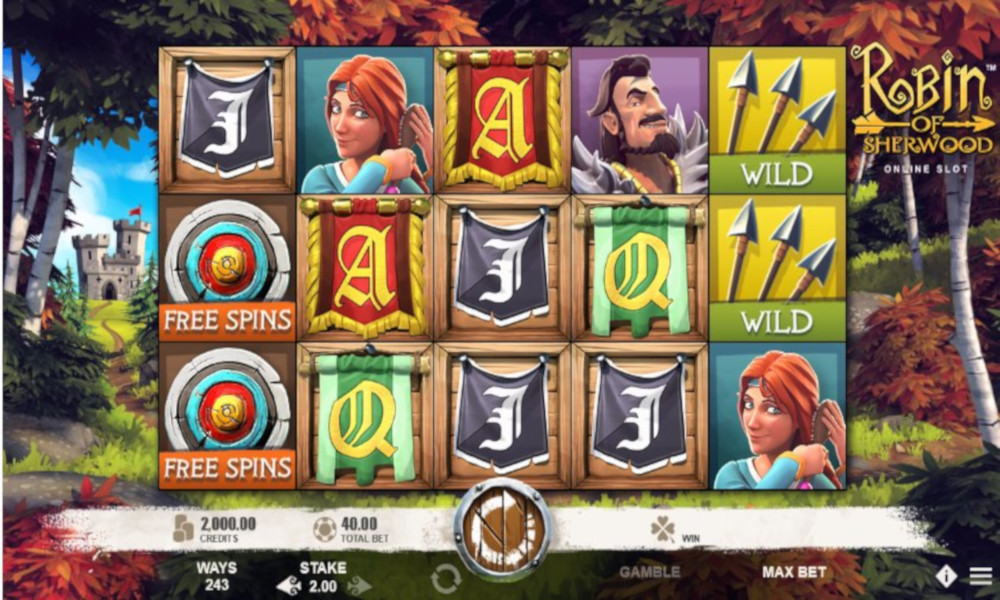 HOW TO PLAY Robin of Sherwood?

Robin of Sherwood is a classic 5-reel slot layout. It comes with 243 ways to form a winning combination. All winning lines are active at all times but the players have the ability to select their own coin value and bet size.

This game was produced by Microgaming’s subsidiary – Rabcat – who did a fantastic job in making Robin of Sherwood a people’s game thanks to its affordability. With the lowest stake standing at €0.20 and the biggest bet of €40, this famously inspired slot game will be of a great appeal for a wide range of players.

In order to win in Robin of Sherwood, the players need to line up combinations consisting of three matching symbols in any of 243 winning lines – from left to right. Each time a winning combo is achieved, the players will have the opportunity to play a Gamble Game. This particular feature gives you a chance to double your winnings by choosing which target an arrow would hit. You have either green or red to pick from so make your pick and hope that Ladu Luck will smile upon you.

One cannot escape the beauty of the overall design here with Sherwood Forest and the Sheriff of Nottingham’s castle standing proud in the background. All of the characters are there as well and Microgaming blessed us with presence of Maid Marian, Little John, the Sheriff himself and Friar Tuck.

The overall excitement builds, however, with these symbols spinning on the reels and features activating.

Wild + Scatter – Robin’s arrows represent the Wild symbol which stands for any other symbol in a winning combination, except for the Scatter. The target is, obviously, the Scatter – which is responsible for triggering the Free Spins feature which will be described in detail below.

Wild Turning Feature – is a randomly triggered feature. Once it goes on, all high-paying symbols on one or more reels will be transformed into Wild symbols. With an entire reel turned Wild, the players will have a much better chance of achieving big(ger) wins.

Free Spins – three or more Scatters anywhere on the reels will launch this feature. Players will benefit from 10 complimentary rounds. This feature can be triggered simultaneously with the Wild Turning Feature, which will be activated first if such a coincidence happens. The only downside to this Free Spins feature is the fact it can be re-triggered.

Royal Clearing Feature – Microgaming made sure to add an extra spice to the Free Spins feature by introducing the Royal Clearing feature which occurs on every second (free) spin. It will eliminate the lowest paying symbol to boost your chance of grabbing a win and comes as a nice little top-up to an already engaging gameplay.

The simplest attribute to use in order to describe the Robin of Sherwood slot game is – high-quality. Such illustration can be applied to all elements of the game, starting from the most obvious – visuals. Impressive graphics are complemented by a fantastic gameplay and it’s fair to say players will enjoy in a highly entertaining game.

Robin of Sherwood comes with 5 reels and 243 winning ways wrapped inside a low to medium variance package and an RTP of 95.86%. With a maximum jackpot of 2,000 coins, this Microgaming product is not top on the scale of the most rewarding games out there but it needs to be mentioned that it won’t cost you much either.

Microgaming has incorporated a selection of neat features which include Wild Turning Feature, Free Spins and Royal Cleaning feature to help you maximise your potential and leave the Sherwood Forest with a huge smile on your face.

WHERE TO PLAY ROBIN OF SHERWOOD FOR REAL MONEY:

Players, we need your help with how we should to rank and rate these reviewed casino games. You can help us by rating this game, and if you really enjoyed playing Robin of Sherwood. You can also share it with your friends on Facebook, Twitter and via email. For all freeplay games, if your free credits run out, simply just refresh the page and your balance will be restored.

PLAY ROBIN OF SHERWOOD AT THESE TOP RECOMMENDED CASINOS