Satoshi’s Secret slot is a bitcoin-themed slot with 6 reels and 20 paylines by Endorphina. The slot made a big splash when it first came out, mainly due to its topic choice. Endorphina is famous for picking unusual slot themes, and Satoshi’s Secret online slot is the best example of that. The Bitcoin slot is equipped with a great design, graphics, and a fantastic theme that’s trending right now. There’s not a thing you’ll find to be excessive, as Endorphina really combined each element well. The game has a 50,000 jackpot.

In terms of features, Satoshi’s Secret online slot does not feature the typical slot modifiers. Instead, you get to play the Trading Bonus, where you predict the rise and fall of currencies through endless spins. You can claim your bonus as soon as you see the chart moving in your favour or wait out to see whether you’d get a bigger bonus. The game also features a Wild and a QWERTY Bonus. The QWERTY Bonus lets you hack bank accounts in hopes of stealing hard-earned cash.

Although the game came out in 2016, it is still a revolutionary slot among new releases. Even five years after the launch, there isn’t anything similar to this game! Endorphina truly knows how to make a spectacle, and this cryptocurrency spectacle is something to watch out for. Like all Endorphina slots, the game has a 96% RTP, low variance (if frequent wins are any indication), and 20 paylines. It comes on a 6×3 layout which displays all the necessary icons and features. Keep reading our Endorphina Satoshi’s Secret slot review for more info and scoop! 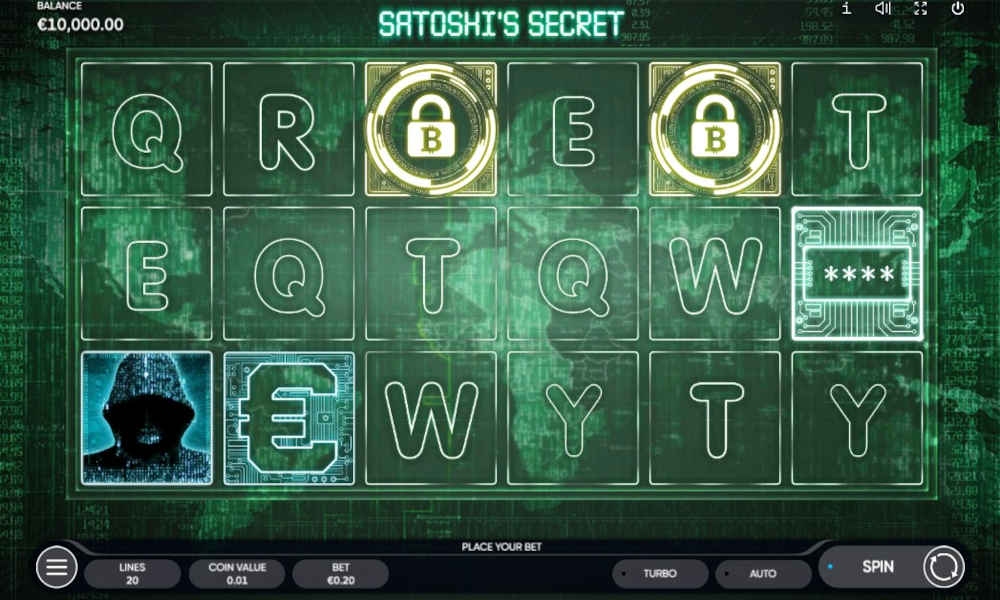 HOW TO PLAY Satoshi’s Secret?

The rules are simple: keep your operation covert, and you are good. The hacker’s paradise of Satoshi’s Secret is a game inspired by crypto, BTC, and hackers. And the dark design of the game clearly conveys the message the authors wanted us to get. Hacking is a dangerous job, one that involves hours in front of your screen trying to decipher binary codes of someone else’s account. But we digress. We’re here to present Endorphina’s dashing Satoshi’s Secret slot. And we are quite excited, as this is one of the finer games that we’ve seen from Endorphina.

The game boasts a 6×3 reel layout which puts forth 12 different icons. The classic low-pay tiles include the letters Q, W, E, R, T, and Y. it doesn’t take a genius to figure out they are meant to spell out QWERTY (and if you manage to do that on the grid, you’ll get a bonus). The higher icons in the set are regular currencies, represented by their symbols €, $, and £. A hacker is a premium in the game, awarding 250x for a max combo of 6 matching icons. If you happen to notice an icon resembling a motherboard with four hidden letters, that’s Wild. The Wild participates in boosting winnings, replacing all icons except the Hacker and the BTC.

The dark and mysterious design looks like something you’d see in a Matrix movie. If Neo were into crypto, he’d definitely play Satoshi’s Secret! And he would win big – the game’s payout is 50,000 coins in total. The game lets you wager between €0.01 and €200 per spin, which is great if you like to experiment with bets. The game is available in all Endorphina online casinos for free and for real money. If you want to play and learn Satoshi’s Secret, you will have to get used to 96% RTP (it’s common practice for Endorphina) and low variance. As always, the provider did not state the variance level, but we are guessing it’s low because the wins are frequent (and small). Big wins, and especially massive wins, are hard to come by.

The revolutionary Bitcoin slot is comes equipped with innovative features. Two are Satoshi’s Secret slot native modifiers, with Risk Game being the only component seen in other Endorphina slots. Here are all the boosters in Satoshi’s Secret online slot.

Cryptocurrencies are still a new field for many of us who lack formal education in economics. Nevertheless, they are quite entertaining and inspirational – just look at Satoshi’s Secret slot! Endorphina made sure to create a game that’s compelling, entertaining, and generous with payouts.

Trading and QWERTY Bonuses are the main features within the game. With the QWERTY bonus, you can hack other people’s accounts and win a lot of money. If you are more into trading currencies and earning on trends, the Trading Bonus is your go-to option!

The game is the first 6-reel wonder to come out of Endorphina’s kitchen. To better understand how six reels benefit the grid, just think of the possibilities you get with 20 paylines. The game also has a standard 96% RTP, which means you’ll get your wins often. The maximum payout amount you can get in Endorphina Satoshi’s Secret slot is €50,000. We hope you liked our Satoshi’s Secret slot review – for more Endorphina slots, visit our slot reviews page!

WHERE TO PLAY SATOSHI’S SECRET FOR REAL MONEY:

Players, we need your help with how we should to rank and rate these reviewed casino games. You can help us by rating this game, and if you really enjoyed playing Satoshi’s Secret. You can also share it with your friends on Facebook, Twitter and via email. For all freeplay games, if your free credits run out, simply just refresh the page and your balance will be restored.