London is calling through the Victorian fog in one of the latest Microgaming titles called Sherlock of London. This 5 reel and 25 payline online slot is an exclusive Rabcat product, filled with mystery and drama but also some pretty engaging game features.

Crispy graphics only add an extra layer to this eventful product which packs no less than three different bonus features in the base game alone. More is to be expected from Free Spins, of course, as this medium volatility game aims to reward you with up to 2,000x the Stake.

Sherlock of London online slot has an RTP of 96.03% which puts it on the medium scale in terms of variance. This Rabcat title is fairly affordable, knowing that it can be played from as little as €0.25 up to €50. Slightly lower top limit could be a deterring factor for high-rollers but we’re pretty sure the engaging gameplay will make them reconsider their stance. 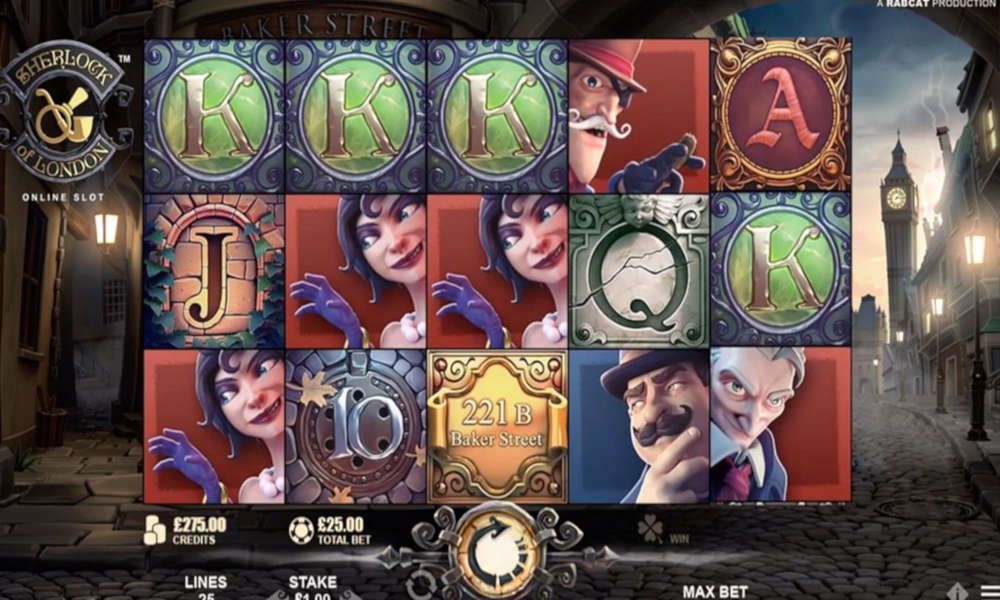 HOW TO PLAY Sherlock of London?

As a game dealing with an epic subject, Sherlock of London is an epic-looking slot as well. Cobble-stone street with Big Ben in the background and a mystical feel throughout, this Rabcat-produced online slot is definitely one you should not miss out on.

This title features a standard playing grid consisting of 5 reels and 3 rows. Additionally, there are 25 paylines to benefit from. Microgaming and Rabcat made sure to make this product a highly-affordable one. You can place bets starting at €0.25 and going all the way to €50. We’d all agree this is not the most expensive slot game out there, which can be a huge advantage and a drawback at the same time.

As far as symbols go, you will find everything you’d expect to find. All the main characters are here – including Sherlock himself and Dr. Watson, Inspector Lestrade, but also a trio of villains. Classic playing card symbols – all decorated fittingly and accordingly – act as low-paying symbols. The special elements come in various forms. You get two types of Wilds – fully expanded Sherlock is one of them! – whereas Dr. Watson is Extra Wild. Naturally, there is a free spins Scatter, picturing two of our main characters together.

Game controls are neatly placed below the reels where you are warmly advised to adjust the gameplay before spinning the reels. You can also select the AutoPlay option, sit back and enjoy the fun.

The game pays for combinations of at least three matching symbols on a payline from left to right, which has long become the industry standard.

Microgaming rarely fails when it comes to gameplay and Sherlock of London is not an exception here. How could it be, as a game dealing with a legendary character and an even more popular storyline? A line of features is here to boost the adrenaline and your winning possibilities. Talking of which, this class-act game comes with a jackpot worth up to 2,000x the stake.

Connecting Wilds Feature – landing at least two wilds on the same spin will trigger this feature. But what’s it all about? Namely, all symbols found in between these two wilds will become WILD themselves! As a result, you get plenty of winning opportunities.

Double Win Feature – this one is also all about the Wilds! Landing at least two Wilds next to each other on two different reels will provide you with a 2x multiplier boost. Once again, a nice little top-up in the base game.

Bonus Spins Feature – Another one dealing with Wilds! Landing a wild on the first and-or the second reel will provide you with and additional spin (or two) containing sticky Wilds! Not too shabby, innit?

Free Spins Feature – gets triggered by landing at least three of the Holmes & Watson Scatter symbols anywhere on the reels. You will be getting 10 complimentary rounds during which you will benefit from expanding wilds (reel-high ones), while you can also trigger the Connecting Wild feature and the Double Win multiplier. Sadly, the Bonus Spins feature is not available here. Moreover, during this feature, Dr. Watson is transformed into Extra Wilds which pay the top jackpot of 2,000x the stake!

Sherlock of London is a brilliant-looking game. Rabcat deserves a tip of the hat for producing a game with such detailed graphics which capture the essence of the Victorian London perfectly. Furthermore, this Microgaming-exclusive also comes with a rather interesting gameplay.

What you can hope to get is three base-game features (all revolving around the Wilds) whereas the Free Spins feature – re-triggerable, which means you get up to 20 free spins in total – is the real deal! During this great feature, you also get to trigger Dr. Watson Extra Wild where the top prize of 2,000x the stake.

All in all, this medium-volatility slot with an RTP of 96.03% will provide you with plenty of excitement. Frequent wins on a relatively low maximum bet might come as an unpleasant surprise to high-rolling players, but they will surely be swayed over with the game’s highly-engaging gameplay.

WHERE TO PLAY SHERLOCK OF LONDON FOR REAL MONEY:

Players, we need your help with how we should to rank and rate these reviewed casino games. You can help us by rating this game, and if you really enjoyed playing Sherlock of London. You can also share it with your friends on Facebook, Twitter and via email. For all freeplay games, if your free credits run out, simply just refresh the page and your balance will be restored.

PLAY SHERLOCK OF LONDON AT THESE TOP RECOMMENDED CASINOS

Mega Moolah
One of the things that will attract players to a slot game is the offering of a progressive ...
Software:
Games Global, Microgaming
Reels:
5
Paylines:
25
RTP:
88.12%
Volatility:
Medium

Dream Date
Dream Date is a themed game from Microgaming that is geared towards the ladies. This ...
Software:
Games Global, Microgaming
Reels:
5
Paylines:
243 Ways to Win
RTP:
96.04%
Volatility:
Medium
VIEW ALL GAMES