Designed and developed by Just For The Win especially for Microgaming clients, Sidewinder online slot game is a 5 reel title which depicts a classic slot theme but with a nice little twist. This game starts with 243 ways to win, moving up to 1,125 thanks to a unique Sidewinder feature first introduced in Rainbrew.

Filling the reels with Wilds in this video slot will increase the number of paylines, while the players can also hope to benefit greatly from a Free Spins feature where expanding Wilds have a great role to play in helping you get significant payouts.

Sidewinder slot game is available to play on all devices and platforms and comes with a rather wide betting range which starts at €0.10 and moves up to €100. This is a high-volatility game which brings up to 136,000 coins for the maximum prize. 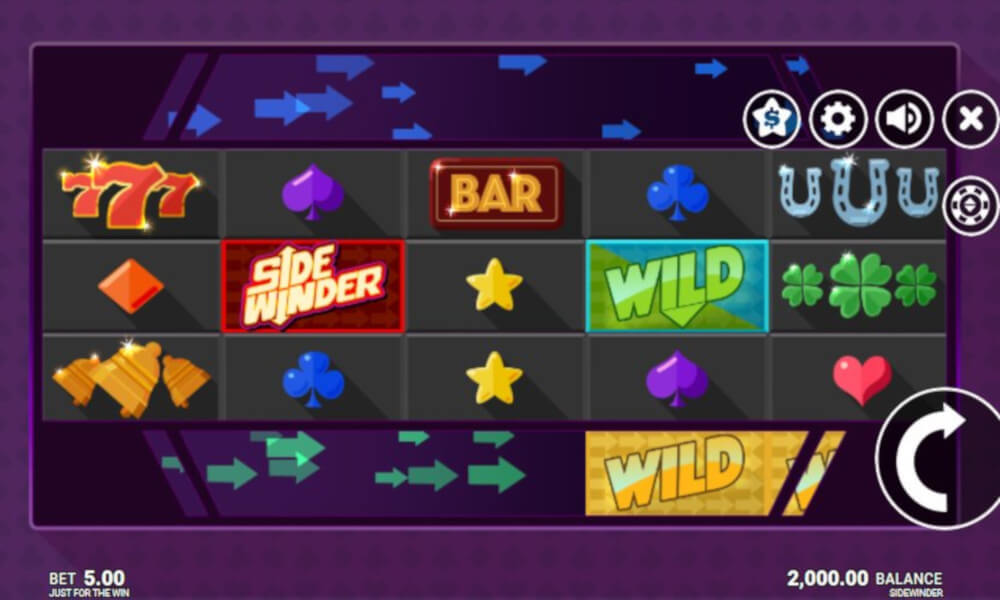 HOW TO PLAY Sidewinder?

What first appears as a classic 5×3 reel set with 243 ways to win will soon transform in a widely popular 3-5-5-5-3 system with no less than 1,125 paylines. But that’s just the start of it as Sidewinder online slot has a lot to offer.

This game is a classic slot presentation with symbols such as spades, clubs, diamonds, hearts and stars acting as low-value denominations, while four-leaf clovers, horseshoes, lucky red 7s, bars and golden bells are the high paying symbols. Sidewinder slot is all about Wild symbols however – the total of three different ones – which activate the game’s unique mechanics that we’ll talk more about further below. The players will also be hoping to lay their eyes on the Sidewinder Logo Scatter, which is responsible for launching the Free Spins feature.

Before you actually get to enjoy the aforementioned features, you need to make sure to adjust the game settings and set the controls to your own liking. The Sidewinder slot might be latching on a classic theme but it’s presented with a pinch of modern and we’re sure you will like what you see. The game still has all the standard options – such as the Auto Play button, the betting range settings and a paytable layout to guide you through the game mechanics.

Being a classic slot game with a modern-day twist, Sidewinder does not come with a wealth of game features. However, Microgaming have done enough – together with Just For The Win – to fill it with a couple of feature that add an extra spice to it.

Three Types of Wilds – Sidewinder slot comes with not one, or two Wild symbols – but the total of three. What you will find here are Regular Wild, Top Wild and Bottom, the latter two of which both have an arrow on them pointing up and down, respectively. Regular Wild will appear on horizontal reels only, whereas the Top Wild will only be available on reel 2 and on the bottom horizontal reel. As for the Bottom Wild, it appears on reel 4 and the top horizontal reel.

Sidewinder Feature – is all about the Wilds. Once they appear on the reels – the Top Wild and Bottom Wild will both launch this bonus which is all about expanding the reel grid and boosting the winning ways. A Top Wild symbol will activate the top horizontal reel – a bottom Wild symbol will activate the bottom horizontal reel, each of which pushes the winning ways number to 576. If it happens that you get both types of Wilds at the same time on the reels, the grid will be fully expanded with winning ways increasing to 1,125.

Free Spins – as usual, this feature is triggered once a player lands a designated number of Scatters in certain positions on the reel. In this particular case it is all about landing 3 or 4 Scatters on reels 2, 4 and the horizontal reels. There will be six or 10 free spins to benefit from, depending on the number of the triggering Scatters. If a Wild stops on both horizontal reels, these will connect to create an expanding wild which then boosts your winning possibilities. And just to spice it all up in the end, there will be a complimentary spin rewarded each time you land a Sidewinder Scatter on the horizontal reels during the Free Spins Feature.

The easiest way to describe the Sidewinder slot is classic meets modern. It is an exciting combination of the classic slot machine with an innovative game mechanics which add an extra spice to your spins.

It might be argued that Microgaming and Just For The Win played it safe with Sidewinder as it incorporates the feature previously introduced in Rainbrew but recycling might not necessarily be a bad thing in gaming, especially when a feature is as hot and fresh as Sidewinder.

In a nutshell, this feature is all about boosting the number of reels – and paylines alike – by different Wild symbols which activate the top and bottom reels to give you a better chance of winning. This here is a highly volatile game with the total of 136,000 coins reserved for the luckiest and most tenacious of players.

WHERE TO PLAY SIDEWINDER FOR REAL MONEY:

Players, we need your help with how we should to rank and rate these reviewed casino games. You can help us by rating this game, and if you really enjoyed playing Sidewinder. You can also share it with your friends on Facebook, Twitter and via email. For all freeplay games, if your free credits run out, simply just refresh the page and your balance will be restored.

TRY THESE OTHER Microgaming GAMES

Dream Date
Dream Date is a themed game from Microgaming that is geared towards the ladies. This ...
Software:
Microgaming
Reels:
5
Paylines:
243 Ways to Win
RTP:
96.04%
Volatility:
Medium

Fruit Fiesta
When players are looking for fruit themed slots, they usually do not have to look ...
Software:
Microgaming
Reels:
5
Paylines:
15
RTP:
90%
Volatility:
Low