NetEnt Silverback Gold™ slot is a video slot with 5 reels, 4 rows, 1,024 ways to win, and 96.10% RTP. The safari adventure is a December release for NetEnt, and probably the last release in 2021 for the provider. The company understood the assignment and wanted to end the year with a bang. And what is a better bang than jungle slots? A jungle slot focused on silverback gorillas, the endangered species that’s also among the biggest gorillas in the world, at that!

Judging by the number of features included in the game, it seems you can be the king of the jungle if you want to. NetEnt brought into the game the Silverback Attack, Free Spins, Wilds, and Multipliers. Moreover, if you want to cut the waiting time, you can just purchase boosters via Buy Feature. Free Spins are the game’s focus, but there’s a surprise: the game has a Bonus Round as well. The Bonus Round is there for token collecting, so make use of it to boost your payout and winning chances!

The game is highly volatile, which means wins won’t be as frequent as you’d like them to be. However, the 96.10% RTP ensures a good return of funds, so there’s that. The game also has a magnificent 45,000x the stake max payout potential, so it’s suitable for high rollers (and low rollers who like jungles). The game is a late December release, just in time for Christmas celebrations. If you want to learn more about the Silverback Gold™ slot, read our full Silverback Gold™ slot review below. 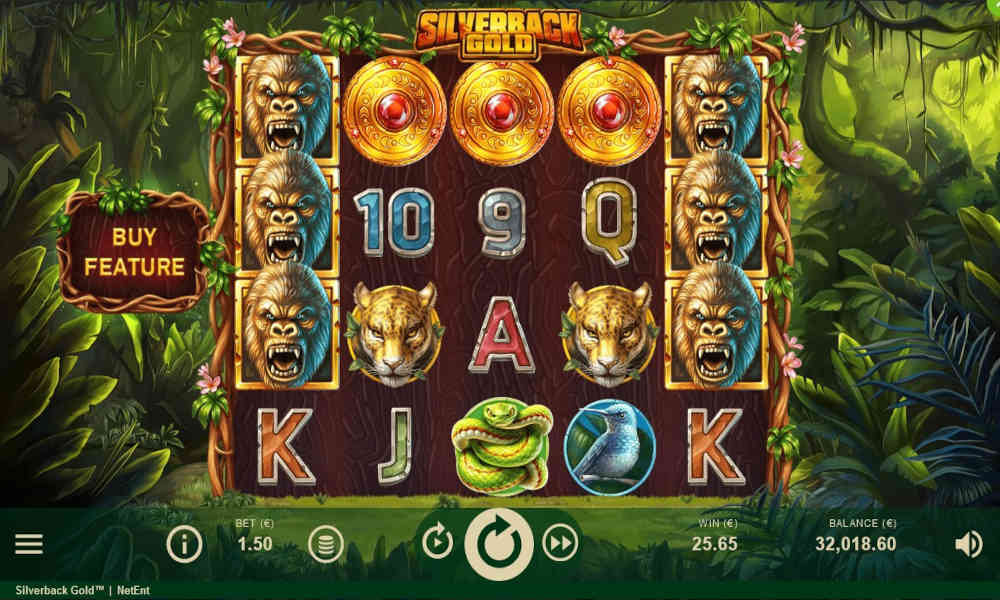 HOW TO PLAY Silverback Gold™?

Silverback gorillas are one of the most majestic species on Earth. Easily the rarest gorillas in the world, silverback gorillas are glorious animals that roam and protect the jungles high in the mountains of Africa. They earned the title of the rarest gorilla thanks to their unique looks (silverbacks) – but they are also the most endangered species of gorillas. Zoology lesson aside, we are here to talk about these magnificent animals featured in the Silverback Gold slot. NetEnt announced the game in November, promising to launch it in December 2021.

The slot is an ode to vast African rainforests where gorillas live. Lush greenery surrounds the wooden reels, with light seeping through the leaves during the rounds. The grid has 5 reels and 4 rows, along with 1,024 ways to win. The game’s RTP is 96.10%, while variance runs high in the jungle. We have to note that the game was not built for a sweet adventure. It’s a bit fast-paced, and the design reflects the harsh living conditions inside the jungle. It’s no walk in the park, but it’s more than worth it as you get to bag up to 45,000x the stake.

The icons on the grid are a collection of various jungle animals, starting with a blue bird, an Emerald Green Pit Viper, a cheetah, a crocodile, and the silverback gorilla. The silverback gorilla is the highest-paying icon, but its golden version pays more. The lower set includes a collection of card royals 10-A. Silverback Gold slot also includes Scatters, Wilds, Multipliers, and bonus game tokens.

If you want to play the Silverback Gold slot for real money, you will have to invest between €0.10 and €100 per spin. Each spin is a potential Free Spin trigger, the main feature filled with Silverback gold tokens. We’ll discuss the tokens in the following section, along with other game features in the NetEnt Silverback Gold™ slot.

The base game in the Silverback Gold slot is fun, but you will certainly appreciate the multiple features NetEnt brought into the game. Here are all the game boosters in Silverback Gold online slot.

NetEnt Silverback Gold slot is a 5×4 slot with 45,000x payout potential and glorious visuals of the African rainforests!

Play with golden gorillas and get rare wins in this video slot dedicated to the rare silverback gorillas. We promise you won’t regret it! As the last slot release of 2021 for NetEnt, the game is incredibly fun, fast-paced, and worthwhile.

You can try the game by playing the Silverback Gold slot for free above or look for it at NetEnt online casinos.

WHERE TO PLAY SILVERBACK GOLD™ FOR REAL MONEY:

Players, we need your help with how we should to rank and rate these reviewed casino games. You can help us by rating this game, and if you really enjoyed playing Silverback Gold™. You can also share it with your friends on Facebook, Twitter and via email. For all freeplay games, if your free credits run out, simply just refresh the page and your balance will be restored.

Disco Danny
Disco Danny has simple moves, but they are quite efficient. On the 3x3 grid, a parade ...
Software:
NetEnt
Reels:
3
Paylines:
5
RTP:
96.04%
Volatility:
High