Solar Queen slot is a 5×4 online slot by Playson from 2019. The Egyptian-themed game features 20 paylines, a 95.78% RTP, and a high variance. To play the game in real mode, visit any Playson casino from our list of recommendations. If you want to learn more about the game before you head out to real-money casinos, read through our Solar Queen slot review.

We listed all the features the game delivers, including Flaming Frames aided by the Sun Symbol. These turn into Wilds after ten spins in the base game, but they are even more potent in Free Spins. Besides the Solar Queen herself, the Free Spins feature is the biggest attraction in the video slot. Playson playfully combined the most recognizable elements of Egyptian mythology into one potent (and beautiful) 5-reel slot. You can also benefit from Winning Multipliers that randomly increase your winnings.

Playson’s Solar Queen online game owns a collection of 20 fixed paylines. In other words, you have only 20 ways to hit a prize (and countless others to miss). The slot’s high volatility further complicates the matter, as you won’t be lucky as often as you want. The game’s RTP theoretical RTP rate is 95.78%. To play Solar Queen for real money, you should wager between €0.20 and €100. Keep reading to discover additional info about the game, such as special features and payouts. 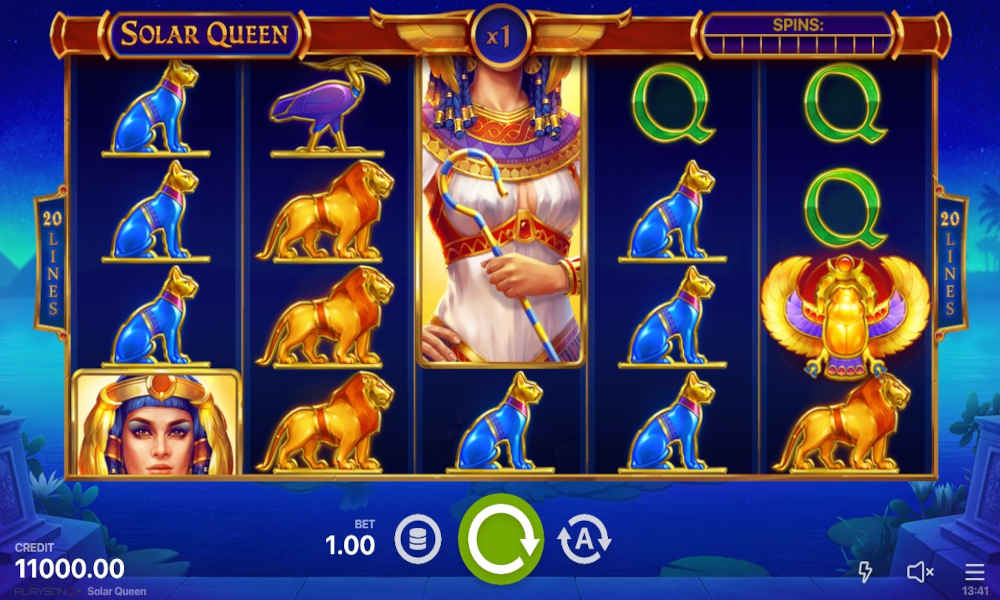 HOW TO PLAY Solar Queen?

Solar Queen slot is an Egyptian-themed online slot made in 2019 by Playson. The distinguished provider is a familiar name in the Egyptian-themed circle, as it boasts an impressive collection of Egyptian slots. This one, however, quickly made a name for itself on the international market. It’s by far one of the most popular slots in Playson’s portfolio with its recognizable theme. And you are about to see why.

Egypt is a common choice for themes in online slots. However, repetitive use of standard symbols and elements might be boring to players. But Playson found a way around that. Its slots, including the one in question, feature an ensemble of classic icons, so they are an obvious choice for punters who enjoy Egyptian mysteries. In Solar Queen, you won’t find anything out of the ordinary in that aspect. The background shows the desert by night, which accentuates the action on the reels. Solar Queen, or should we say, Cleopatra, is the main icon that visits the 5×4 grid. She comes as an expanded icon, covering an entire reel. The Queen and the Wild pay the most (10x for five icons). Besides them, you will also see two Egyptian gods, four statues encased in gold, and card royals 10-A.

To play the game, you first need to set the bet. The minimum wager is €0.20, while the maximum is €100. When you enter the game, the default bet will be set to €1. After setting the bet, it’s time to start spinning the reels. Of course, you can always turn on Autoplay if constant clicking bores you.

The Playson Solar Queen slot has a 95.78% RTP, which is lower than most new games but still okay to play with. Throw in high variance, and you get a temperamental slot that is not too keen on paying out wins often. Nevertheless, you can fill your coffers with a big prize from time to time, and the highest you can win is 2,668x the stake.

Playson Solar Queen slot has a collection of features every player interested in Egyptian slots wants to see. So, let’s see what you can find in the Solar Queen online slot.

For an Egyptian slot, the Solar Queen slot by Playson is a true refreshment. It does offer the classic feels, but it also revolutionizes the way we perceive Egyptian slots.

With its great graphics, outstanding design and more than great technicalities, the Solar Queen slot is a perfect game to enjoy while on an Egyptian adventure. Moreover, if you are new to Playson slots, what better way to familiarise yourself with the company’s work than this release? If you want to learn more about Playson slots and the best places to enjoy them, head to our software review.

WHERE TO PLAY SOLAR QUEEN FOR REAL MONEY:

Players, we need your help with how we should to rank and rate these reviewed casino games. You can help us by rating this game, and if you really enjoyed playing Solar Queen. You can also share it with your friends on Facebook, Twitter and via email. For all freeplay games, if your free credits run out, simply just refresh the page and your balance will be restored.

TRY THESE OTHER Playson GAMES