Space Arcade slot is a 3×3 online slot game by Nolimit City featuring 9 paylines, 7 symbols, and 535x the stake payout potential. Nolimit City released the game at the start of its career, so many naysayers say it’s not as memorable as its latest releases. Best Casinos begs to disagree – this game is perfect for arcade-loving fans who enjoy retro slots and crisp graphics! Moreover, the gameplay is infused with Winged Wilds and Multipliers, so you’ll surely enjoy what this game offers with a smile.

The main game features – and the only ones – are the Winged Wilds and Multipliers. This might not seem as much, but this is a classic slot, so any kind of features is welcome. Winged Wild Mode, whenever it lands on the grid, awards you Respins. But bear in mind, Respins are there as long as you have potential winning combos. If not, the Respins end. Also, Winged Wilds move up the grid by 1 position with each Respin. However, their time on the grid may be brief, but it’s also delicious, as each win increases the Multiplier. In fact, every win within the game increases the Multiplier. The highest it can go is 6x.

The absence of familiar xNudge and xWays features hinders the game’s potential. But then again, we must not forget this is a classic game, so extra modifiers would be a surprise. Winning icons happen every 4 spins (approximately, of course), bringing hit frequency somewhere lower on the scale. Nevertheless, the Space Arcade slot has an impressive RTP of 96.47% and low variance. Bets go from €0.09 to €90, with €1.80 as the default. Keep reading our Space Arcade slot review for the scoop. 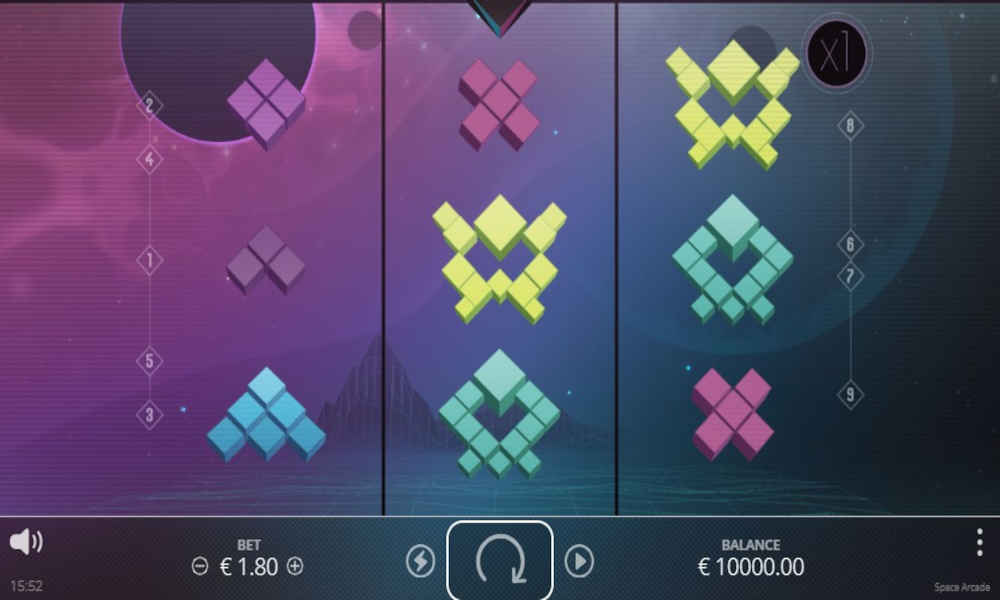 HOW TO PLAY Space Arcade?

Best Casinos team of game reviewers is fond of classic slots. They drew us to online slots in the first place, so we always like to come back to an oldie but goldie to enjoy. On the other hand, we are also quite fond of futuristic vibes, crisp graphics, and arcade games – and Space Arcade has all that. Nolimit City Space Arcade is a 3×3 slot easily classified as a classic. Why? It is mostly because it has an arcade-inspired theme reminiscent of the ‘80s, a synthwave soundtrack, and a killer look. It is beautiful, captivating, and, most of all, well thought out. Nolimit City really spared no expense to create this game, which is how we ended up with 8-bit space theme visuals and several arcade icons. There are seven symbols in total, including the Wild.

The symbols look like they’ve dropped out of a Tetris game, probably due to Nolimit City’s retro arcade space inspiration. You have nine paylines at your disposal for the game. Use them well! The game has a 96.47% RTP and low variance, making it a perfect title for low rollers. Furthermore, its payout is 535x, which, considering the €90 max bet, makes an effort worthwhile. Hit frequency is standard, with wins happening approximately every four or five spins. Sometimes it can last longer, sometimes you get wins in a row, but no one can predict when the successive win will come. Such is the beauty of the Nolimit City Space Arcade slot.

To play the slot at real money casinos online, you should follow these steps:

That’s it, no big deal – playing Space Arcade slot for real money is a piece of cake. In the next section, we’ll talk more about the features found in the release.

Space Arcade really boasts only two main game features. Rest assured, they are more than enough for a good time.

Although classic slots could not get any better, Nolimit City comes and surprises us with Space Arcade. This game brings you to a space where arcade games rule, and you enjoy retro slot gaming. Did interest pique enough? Great, because the Nolimit City Space Arcade slot is our warmest recommendation!

Although you don’t have excessive game modifiers, you can enjoy Winged Wilds and increasing Multipliers with each Respin. The game might have a lower hit frequency, but the 96.47% RTP and low variance speak volumes about its entertaining factor. Plus, you can win 535x the stake – find Space Arcade slot in any Nolimit City casino and find out for yourself!

WHERE TO PLAY SPACE ARCADE FOR REAL MONEY:

Players, we need your help with how we should to rank and rate these reviewed casino games. You can help us by rating this game, and if you really enjoyed playing Space Arcade. You can also share it with your friends on Facebook, Twitter and via email. For all freeplay games, if your free credits run out, simply just refresh the page and your balance will be restored.