When talking about the branded slot games one cannot miss out on a fantastic Star Trek tribute enjoyed across all Williams Interactive (WMS) powered online casinos. Built out of respect towards the original series the Red Alert episode definitely is a game all sci-fi fan will enjoy.

Available for real money and in freeplay version, this intergalactic slot game takes you through 5 reels and three rows with 25 lines of action. All of the movie characters give this game plenty of credibility, whereas it’s up to the game’s remarkable features to prove its true worth.

With a Win Warp feature with no less than 4 mini-features inside it and a massive 15x multiplier on deck, you will never want to be beamed out of it, that’s for sure. 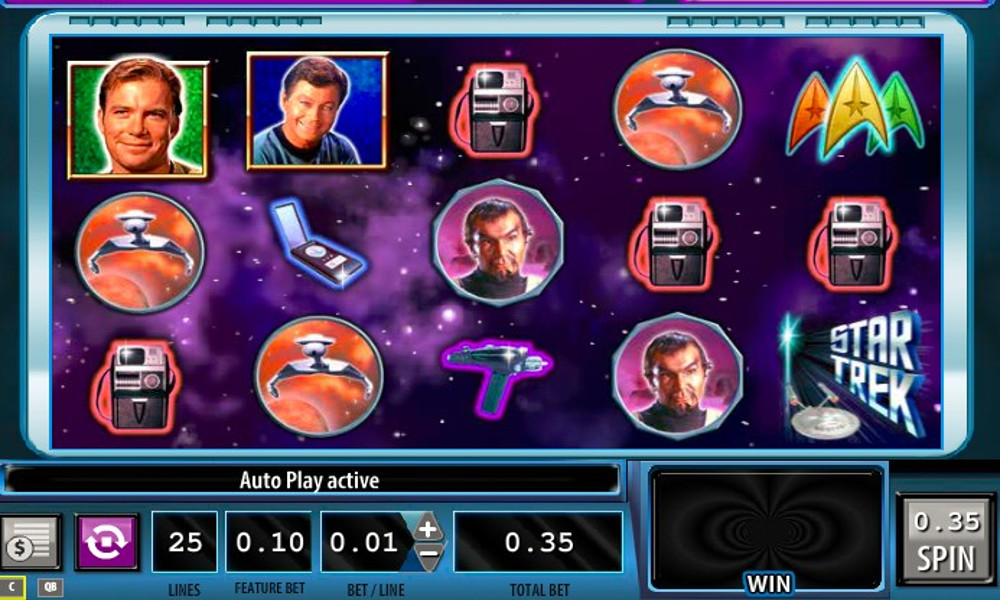 It feels like flying – gliding through an endless sky more precisely – when you first launch the playing screen. A look out of the cockpit offers a stellar view with game symbols slapped on a transparent – glass obviously – background.

Fans of the movie franchise will have no problem naming the characters and identifying all of the game symbols which include Spock and Captain James T. Kirk, among others.

Rules of the game are as simple as they get. Spin the reels to win money off of the combinations of at least three matching symbols on a payline from left to right. The number of paylines is fixed to 25 and it cannot be changed. However, you can always adjust the bet per line value and the feature bet as well to decide what’s the amount you want on a spin.

Starting from €0.35 and up to €105, the Star Trek: Red Alert slot game will see all types of gamers find their place under the sun – starting from the most enthusiastic ones to the highest of rollers. Mind you that choosing your bet can be a tiresome process due to the extensive volume of the offered amounts but there is a Quickbet Panel which helps you choose the right bet value with a single tap/click to the button.

Federation is fearsome as it goes onwards into the unknown, helping you win big while getting entertained by actual movie snippets you are sure to enjoy. The Star Trek: Red Alert slot game benefits from two bonus features, one of which comes with 4 mini-features unlocked by medals you win. All of this is makind this branded slot game an action packer.

Wild & Scatter: Star Trek Logo symbols is the game’s Wild which will replace for all symbols except the Feature Scatters. The Wild will boost your winning potential significantly but it’s the Scatter you want to see on the reels as it’s responsible for all the action in the game.

Red Alert Feature: Once you land three or more Feature Scatters on the grid, a Red Alert bonus will commence. Triggering the Red Alert feature will reward you with a medal but that’s not all – you will be in for an unlimited number of spins played out at an alternative set of reels coloured in – red, obviously.

Though limitless, the feature initially starts with five shields that remain intact as long as you keep winning off of the bonus round. Each winning combination you create during this feature will blast away one of the multipliers ranging between 2x and 15x whereas a winless spin will see your shield(s) get blasted way. Once all shields have been broken, you are prompted to choose between 2 communication channels to learn your faith.

The first option will send reinforcements and set your reels spinning until you land a win, whereas the second one with recharge the shields back up to 100%, effectively reloading the feature. Ultimately, you can also get a ‘No Extra Spin’ message which ends the feature immediately.

Win Warp Feature: the second feature in the game can be triggered when you land a winning spin but don’t trigger the Red Alert bonus. It includes 4 random features that are bound to keep you entertained and rewarded as well.

Rock Creating Multiplying Wild – here you will see the Rock create multiplying leaves in random positions on one of the reels to boost your win up to 10x your bet.

Spock Multiplier – the iconic character of the franchise will appear to multiply your win from 3x up to 10x.

Enterprise Fly-By – on a regular, low-value winning combination the Enterprise ship can fly onto the reels to replace the lower symbols with any of the high-paying ones to boost your win.

Williams Interactive (WMS) deserve a standing ovation for the game they created back in 2017. Their first – and arguably the best – instalment of the Star Trek franchise is such a remarkable tribute to a widely popular series and movies.

Engaging sounds and eye-pleasing graphics, with trademark symbols and characters make it all you’d expected and much more. It’s down to a rather enticing gameplay which consists of two bonus symbols that bring plenty of fun to your playing experience.

Go ahead and shoot some intergalactic rivals during free spins with up to 15x multipliers or spin those reels hoping to land a random base game feature that consists of 4 in-game modes that are there to boost your account and make it stand out.

WHERE TO PLAY STAR TREK: RED ALERT FOR REAL MONEY:

Players, we need your help with how we should to rank and rate these reviewed casino games. You can help us by rating this game, and if you really enjoyed playing Star Trek: Red Alert. You can also share it with your friends on Facebook, Twitter and via email. For all freeplay games, if your free credits run out, simply just refresh the page and your balance will be restored.