Taking you back in time and into a classic 1950’s diner, Swipe and Roll video slot is a 5 reel and 20 fixed payline product available at all NetEnt supported online casinos.  This game boasts a vintage gameplay with a modern twist intended to both amuse and reward you with a jackpot worth no less than 1,620,000 coins.

Swipe and Roll is available on all devices and platforms both in freeplay mode and for real money with bet values starting at €0.20 and going all the way up to €100. This retro reel spinner will be a great choice for old-school players who yearn for good old days of land-based entertainment.

With an RTP starting at 96.35%, Swiper and Roll is a medium volatility slot game which will keep you occupied and entertained for lengthier sessions. A million plus-coin jackpot is only one of attractions you’ll find here. 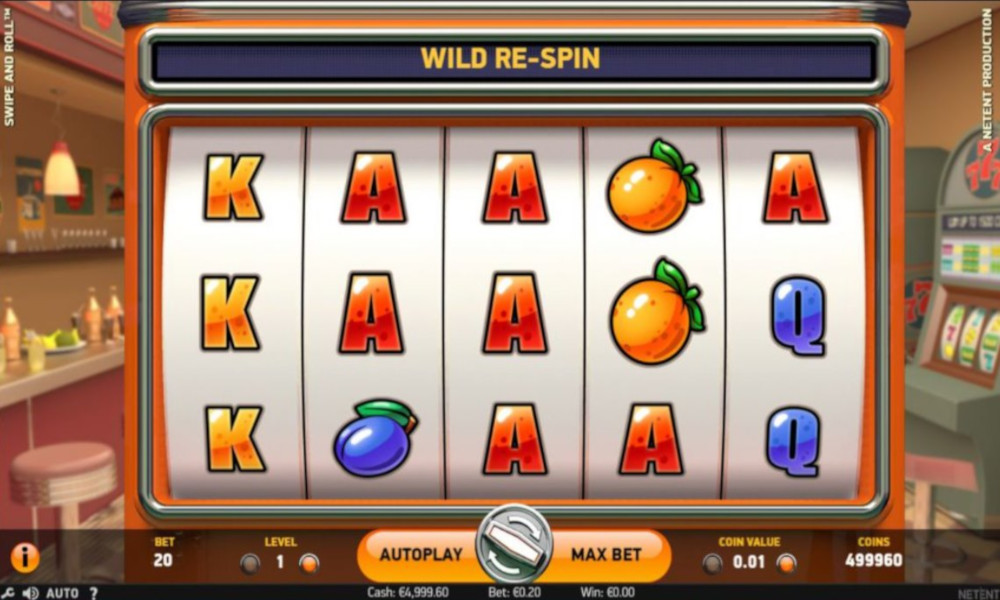 HOW TO PLAY Swipe and Roll?

Swipe and Roll is a good old fashioned online game filled with classic slot symbols – lemons, watermelons, plumbs, diamonds and bells. Complementing the list alongside the high-valued ones, there are also symbols of lower denominations, portrayed as card game symbols – A, K and Q.

The aim of the game is to line up three matching symbols from left to right on a payline in order to win. Aforementioned bet sizes are of a wide range, more than enough to accommodate both beginners and experienced – high-rolling players who like to get the adrenaline rushing.

Line bets are adjusted with the help of usual NetEnt controls which also offers the AutoPlay button which comes with up to 1,000 spins that could be run by default. A range of different options will help you determine when to stop the automatic gameplay and it’s up to you to sit back and enjoy the show.

This brightly coloured game set inside of an American retro diner is built in a HTML5 format and is fully optimized for all possible platforms.

Whenever you ran across a game developed by NetEnt you know you’ll be in for a proper ride. The renowned game developer always makes sure to pack its games stuffed with all sorts of special features and different playing modes. Little to your disappointment this time out, Swipe and Roll game as a classic video slot does not come with a Free Spins feature. But there is no reason to worry.

Wild + Multiplying Wild – diamond symbol represents the game’s Wild which appears on any reel whatsoever to replace all other symbols except the Scatter. This particular symbol also comes with a 3x version of itself which has a big role to play during Wild Re-Spins. Before we get to that, it needs to be noted that 3x Wilds only appear on three middle reels. Any win they’re part of will treble the payout but things get really interesting once you get two or more 3x Wilds in a winning combo as those multipliers will be multiplied – helping you win a whopping 27x multiplier.

Wild Re-Spins – feature is triggered once a player gets three Wilds (of any kind) on the reels. What happens next is that all of the Wilds remain stuck in their positions as remaining ones go through a re-spin to boost your chances of winning.

Scatter – another special symbol in the game which comes in the form of a Bell. These symbols can appear anytime during the game and if you land three of those on reels 2, 3 and 4, a Bonus Game will be activated. Scatters can also be won on the Coin Wheel – which will be described further below.

Bonus Game – is a feature during which players get to swipe three wheels in any order – either up or down – to win prizes. Additionally, the wheels can be set in motion by clicking the spin button. Prizes consist of coin wins and arrow symbols which would expand the winning section and get you more lucrative payouts.

Coin Wheel Feature – is triggered at random during the base game. This feature has cash prizes, Scatters and Arrows to offer. The cash prize is self-explanatory but Scatter symbols will take you into the Bonus Game (explained above), whereas the Arrow will expand the winning area one step up or down. All revealed positions will account for the win later on.

The lack of Free Spins does not make this NetEnt slot game any less interesting. Swipe and Roll is a vintage combination of good old 1950’s apparel and modern-day technology which results in an interesting gameplay.

Available at a wide range of bet sizes, Swipe and Roll video slot is a great opportunity for younger generations of players to get a feel of what life was like back in the day. A retro diner is a perfect setting for such a thing and we have no doubt that both the old and the young will love this game.

With an RTP of 96.35%, a medium variance gameplay and a string of interesting features, this game will bring plenty of fun and excitement. Furthermore, with a possible maximum jackpot standing at 1,620,000 coins, this NetEnt title will instantly become a little more attractive.

WHERE TO PLAY SWIPE AND ROLL FOR REAL MONEY:

Players, we need your help with how we should to rank and rate these reviewed casino games. You can help us by rating this game, and if you really enjoyed playing Swipe and Roll. You can also share it with your friends on Facebook, Twitter and via email. For all freeplay games, if your free credits run out, simply just refresh the page and your balance will be restored.

PLAY SWIPE AND ROLL AT THESE TOP RECOMMENDED CASINOS

Arcane Reel Chaos
Arcane Reel Chaos is being described as a superhero slot but such an attribute does ...
Software:
NetEnt
Reels:
5
Paylines:
20
RTP:
96.81%
Volatility:
Medium

South Park
Built around the insanely popular TV show which has been lighting up our hearts since ...
Software:
NetEnt
Reels:
5
Paylines:
25
RTP:
96.70%
Volatility:
Low

Dead or Alive
Dead or Alive slot by Swedish specialists NetEnt is one of those games that go against ...
Software:
NetEnt
Reels:
5
Paylines:
9
RTP:
96.80%
Volatility:
High
VIEW ALL GAMES