The Creepy Carnival is a 5-reel video slot with 20 paylines from Nolimit City. The eminent game producer launched the game back in 2017, but to this day, it remains one of the most popular Nolimit City slots ever. The title of the release hints at the theme the game takes. Spooky, twisted, and adrenaline-fueled Creepy Carnival slot is a horror-themed freak show on 5 reels.

Feature-wise, the game relies on Free Spins’ main attraction to keep the players motivated to spin away. The feature is great because not only does it allow you to turn for free, but it also gives you ample winning chances with doubled paylines (twenty goes up to forty). Multipliers are there as well, riding on the Respin features with each win. Star Spins, a feature we’ve never quite seen before, is there as the cherry on top of this gruesome video game.

Behind the reels, the situation is slightly tamer than on the front. A 96.07% RTP pair with low-medium variance means you won’t have to wait long for a payout. Speaking of payouts, you’ll be surprised to see a maximum payout potential of 1,595x. The minimum bet available is €0.20, while the maximum wager amount stops at €100. The game is available for real money play/free play at all Nolimit City casinos. Keep on reading to learn more details in our Creepy Carnival slot review. 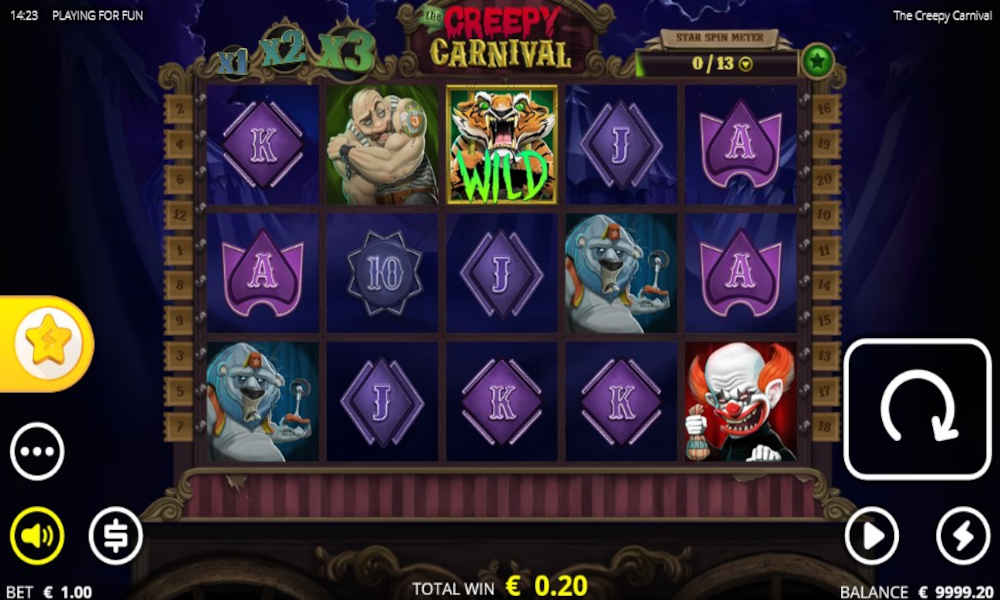 HOW TO PLAY The Creepy Carnival?

Here is the deal: carnivals spell horror. We’ve seen all the horror movies, we are afraid of clowns, and we generally avoid anything that has the word “creepy” in its title. But how can we resist a Nolimit City slot game? We had to try this slot and see for ourselves how Nolimit envisions a creepy carnival. And we are not disappointed with what we’ve seen.

The game is as gruesome as it gets. We even wished Nolimit City did not have such a talented team with a knack for bringing to life macabre visuals at certain points. So, as you can imagine, the game has impeccable graphics, the details are on-point, with some of the most realistic visuals we’ve seen in a long time. Plunged deep into the darkness, the 5×3 grid features carnival-themed details surrounding the grid. However, on the grid, a myriad of freaky characters switch places as you hit the Spin button. Five tiles belong to the low-paying set, and they are all card royals (10-A). Five more are high-paying, and they all represent characters you’d typically see in a circus. A bear, a monkey, a big man, a woman that’s leading the show, and of course – a clown. The clown looks like it came out of Stephen King’s novel It. The clown is worth 15x the stake if you match five identical icons.

To play the game, you need to first set a wager amount. The minimum bet is €0.20, while the maximum wager amount is €100. The game pays 1,595x the stake if you are lucky enough. If you want to speed up the process, you can turn on Autoplay.

The game features a standard collection of game boosters. There are free spins, Respins, as well as Wilds and Multipliers. We also liked the Star Spin, an unusual feature that adds a nice touch to the game.

Nolimit City Creepy Carnival is a spectacular slot if horrors are your kind of jam. Actually, anyone who’s at least interested in high-quality slots will definitely have a lot of fun with this game. It has great graphics, a spine-chilling soundtrack, and a plethora of game features.

To be fair, the low-medium variance came as a surprise as we expected a highly volatile action. It’s not, and you can often win thanks to its 1,595x payout and 96.07% RTP. The game is available in all Nolimit City casinos. We hope you liked our Creepy Carnival slot review – for other Nolimit City slots, visit our game review database.

WHERE TO PLAY THE CREEPY CARNIVAL FOR REAL MONEY:

Players, we need your help with how we should to rank and rate these reviewed casino games. You can help us by rating this game, and if you really enjoyed playing The Creepy Carnival. You can also share it with your friends on Facebook, Twitter and via email. For all freeplay games, if your free credits run out, simply just refresh the page and your balance will be restored.

See all of our Slots game reviews where you can play 596 slots games for real money in any of our recommended casino sites.

PLAY THE CREEPY CARNIVAL AT THESE TOP RECOMMENDED CASINOS