The Flash is a DC Comics official slot game presented by the industry powerhouse Playtech. Another fully branded online slot speeds its way into the growing portfolio and comic book fans could not be happier. This is a 5 reel and 50 payline slot with fast-paced gameplay. Overall, a truly remarkable homage to the franchise and another addition to the DC Super Heroes Jackpot series.

This game will see players benefit from random Wilds and a truly entertaining – and rewarding – Free Spins feature during which you get to choose between The Flash and the Reverse-Flash for coin prizes whenever these two land on the reels. As a progressive jackpot slot, The Flash is one of those games that is here to stay.

Playtech created The Flash as a high volatility product. It caters to different types of players thanks to its rather wide betting range. Cost per spins start at €0.50 and go all the way up to €500 which will put a wide smile on any high roller’s face. 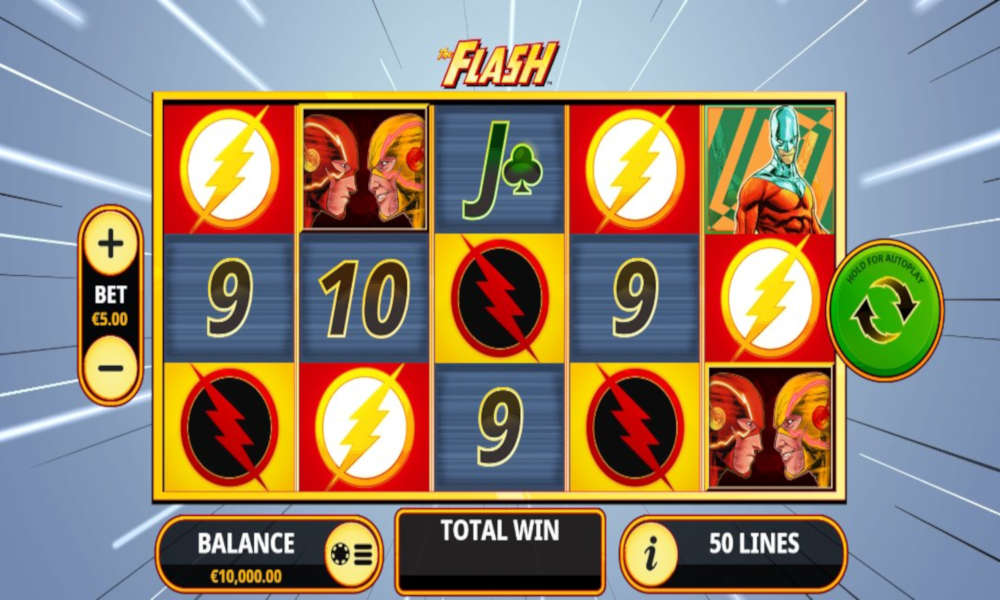 HOW TO PLAY The Flash?

Playtech decided to honour the Flash just the way brand deserves. Visually simple and straightforward, this 5 reel slot is all about what’s hidden within the gameplay. The moment you load up the screen, you will feel as if you’re running speed light yourself with motion lines in the background giving you exactly that kind of a feeling.

Clean lines and simple design make this game a proper comic book classic. On the left side of the screen, you will find the plus (+) and the minus (-) button where bet values are determined. Do note, however, that the Flash is a highly volatile game with a betting range going from €0.50 up to €500. Therefore, your account could get empty even faster than the Flash himself.

Symbols on the reels include a selection of classic card game symbols – from 9 to Ace. Playtech also included The Flash himself, The Reverse-Flash as well but also other characters from the comic. What’s more, you will also be seeing a lot of the brand’s logos – The Flash logo and The Reverse-Flash logo. These are the game’s Scatters which have a huge role to play. More about it below.

What you need to know for now is that the game pays for combinations of at least three matching symbols on a payline, lined up from left to right.

Those of you who have tried DC Super Heroes Jackpot slot games will know what to expect here – a gripping gameplay and a rewarding feature plan which includes no less than 4 mystery progressive jackpots. First things first so let’s take it from the top.

Random Wild Feature – During any spin whatsoever, a random Wild may appear while the reels are in motion. It’s only fitting for a game like The Flash. Once the reels stop all wins creating with the help from Wilds will be paid. The Wilds appear on all reels except the first one.

Battle Feature – You will need 5 Scatters anywhere in sight in order to trigger the Battle feature. Before the feature start, you are required to make your pick and select the hero you think will triumph – The Flash or The Reverse-Flash. During this feature, 5 bonus prizes are displayed above the reels, going up to 100x your stake. During the battle – which is actually a classic free spins feature – any Flash symbol appearing on reel 2 will mean The Flash wins. At the same time, The Reverse-Flash scoops a win any time The Reverse-Flash symbol appears on reel number 4. If the character you’ve chosen has won three or more prizes during the free spins, you get to claim the entire loot.  And in case your character has won two or less prizes, you get to claim only those prizes.

DC Super Heroes Jackpot – famous feature is here once more with players given a shot at one of 4 mystery progressives on any spin. The higher the bet, the bigger the chance of you hitting any of the jackpots:

Playing the jackpot game is pretty easy. You get a field of 20 jackpot icons to click on. You start clicking on the fields at your leisure and collect the colours. Once a collection area corresponding to all four progressive jackpots is filled – you get to claim that particular jackpot.

The Flash slot game is another in the line of DC Super Heroes Jackpot games which brings plenty of excitement as well as winning opportunities. This particular Playtech pearl is a 5 reel product with 50 paylines and a pretty straightforward – and a rather suitable – gameplay.

The players will get a chance to pick a battle between The Flash and The Reverse-Flash and claim one of four mysteriously random progressive jackpots. This game is a highly volatile one and needs to be treated with caution. The biggest reason for caution is financial as The Flash will quickly empty your pockets if you’re playing it for real money.

And if you want to race your way through the exciting world of The Flash, you can do it right here on Best Casinos. Test your skills, work on your stamina and after that choose a casino of your liking to hit it big time.

WHERE TO PLAY THE FLASH FOR REAL MONEY:

Players, we need your help with how we should to rank and rate these reviewed casino games. You can help us by rating this game, and if you really enjoyed playing The Flash. You can also share it with your friends on Facebook, Twitter and via email. For all freeplay games, if your free credits run out, simply just refresh the page and your balance will be restored.

PLAY THE FLASH AT THESE TOP RECOMMENDED CASINOS

Superman 2
Superman 2 is the sequel to the popular slot from Playtech and with this game, players ...
Software:
Playtech
Reels:
5
Paylines:
25
RTP:
95.03%
Volatility:
Medium

The Mask of Zorro
The Mask of Zorro is a new Playtech slot title that needs little introduction. With ...
Software:
Playtech
Reels:
5
Paylines:
40
RTP:
94.99%
Volatility:
High