The Wizard of Oz

Based on an iconic piece of literary art later made into a movie, the Wizard of Oz slot is a WMS Gaming branded slot game which features 5 reels, 30 paylines and all of the well-known characters waiting for you – Dorothy, Scarecrow, Tim Nam and the Cowardly Lion.

Embark on the magical adventure through the land of Oz with this slot that features original movie snippets and music, along with some rather exciting and rewarding game features. The first branded Wizard of Oz title to be released from WMS is definitely the one you should try out.

Four bonus features in total and a possible payout worth 50,000 coins on this wide bet-range slot will make your time at the Wizard of Oz be worthwhile.

THE WIZARD OF OZ SLOT GAME 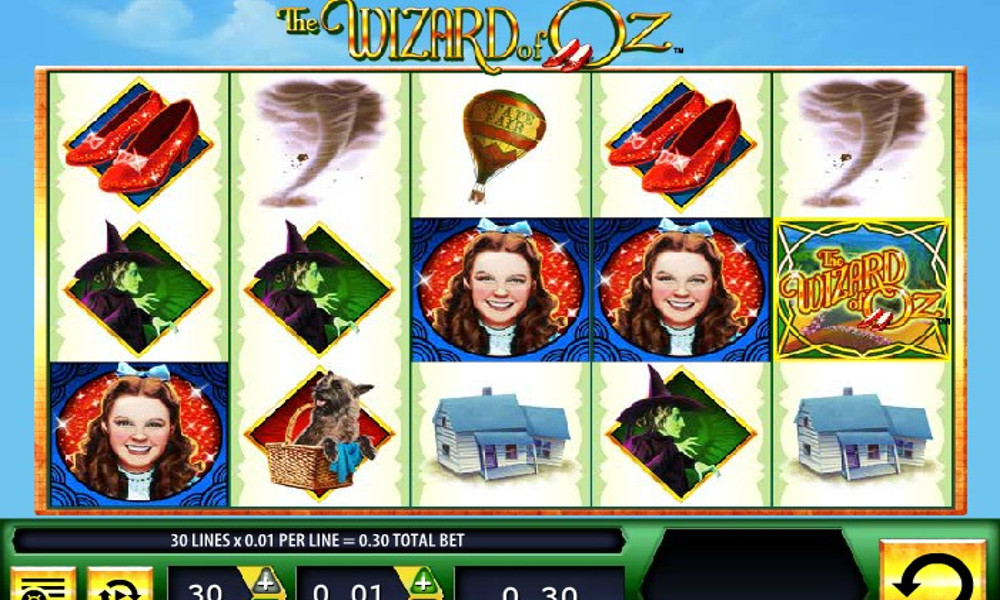 HOW TO PLAY The Wizard of Oz?

Being a 2013 title, the first edition of the Wizard of Oz slot game does not have graphics of the highest quality to boast with. This game, however, oozes a special kind of appeal and will grab your attention for a string of different reasons.

The five-reel and three-row grid is slapped across the blue skies background which gives this game a light and joyous appeal. Game controls are suitably placed below the reels where you are encouraged to choose the number of paylines (up to 30) and a line bet value. The Wizard of Oz is a game created to accommodate a wide range of players, with different budgets. With a bet size starting from €0.01 per spin on a single payline up to €150 for all 30 of them, this definitely is a slot game fit for both slot beginners and high rollers alike.

The aim of the game is to land at least three matching symbols on an active payline which makes this game quite easy and straightforward to enjoy.

The Wizard of Oz might not be the most attractive game you will have come across, but it most certainly possesses all of the elements a slot game needs to have. From Wilds, Scatters, Random base-game bonus features to specially triggered ones, this fairy-tale presentation does not need flashy visuals.

WIld & Scatters: the game’s logo is a Wild card which can expand to fit an entire reel and thus be a significant boost to your winning potential. It substitutes for all other symbols on the reels except for the Feature and Jackpot Scatters. The latter of these two appears only during the base game and it’s the highest paying symbol of them all.

Glinda Good Witch Feature: a randomly activated feature will see Glinda – the witch – fly across the reels to turn up to four reels wild and hence boost your winning ability. It’s only the start as The Wizard of Oz has plenty of more features to offer.

Oz Pick feature: triggered by three Feature Scatters on reels 1, 3 and 5, the Oz Pick bonus will present you with three different options to choose from. Players can either opt for different cash prizes or go with two more features:

Cash prizes normally go up to 10x the stake and you are advised to go with the two features where you’ll get free spins and multipliers.

Winged Monkey bonus: eight free spins with a 1x multiplier is what you get if the Winged Monkey was your choice. It’s not all however as the Monkey acts as a Wild and is slapped on the middle reel to help you win big prizes. The Emerald City symbol can appear during these free spins and that’s when you will be granted another 8 complimentary rounds.

Road to Emerald City bonus: opting for this feature will stand you in front of a Yellow Brick Road where 30 emeralds will shine upon you with lucrative cash prizes, a character land or the Emerald City. Character Land takes you to four different places:

Each of these places will present you with a Gold Charm to pick more emeralds on top of those 30 on the Yellow Brick Road or the corresponding character.

Ultimately, the Emerald City symbol takes you to meet the Wizard of Oz which is indeed the game’s biggest attraction.

Don’t let the lower quality of the graphics steer you away from the Wizard of Oz slot game which is quite a gem when you look at it feature-wise. A look at the paytable will not let you in on all the secrets so make sure to hit that spin button and explore the features yourselves.

This review, however, has been pretty explanatory as we don’t like to keep our readers in the dark so make sure to go over it once again as it might take some time to get a full grasp of everything you can benefit from in this seemingly action lacking game.

Expanding wilds, random base game features, retriggerable free spins, cash prizes and multipliers – you name it – The Wizard of Oz has got them all. Choose your bet line wisely and be patient, you might even get to meet the wizard himself.

WHERE TO PLAY THE WIZARD OF OZ FOR REAL MONEY:

Players, we need your help with how we should to rank and rate these reviewed casino games. You can help us by rating this game, and if you really enjoyed playing The Wizard of Oz. You can also share it with your friends on Facebook, Twitter and via email. For all freeplay games, if your free credits run out, simply just refresh the page and your balance will be restored.

PLAY THE WIZARD OF OZ AT THESE TOP RECOMMENDED CASINOS