Straight from the creative kitchen of Play’n GO arrives another hit slot game Tome of Madness. This peculiarly epic video slot is the fourth adventure with Rich Wilde whom we had the chance to meet in Aztec Idols, Pearls of India, and the iconic Book of Dead. Using a 5×5 grid, you have no limitations in terms of winning ways as there aren’t any. Instead, you are treated to a host of tiles that fall in clusters where your luck determines how often and how big the clusters will be.

As all titles from this famous provider, the game sports numerous features that light up the game screen like fireworks. However, you might have difficulties deciphering which feature is which as they all appear in a string during fast gameplay. The cluster winning system ensures the gradual building of the excitement as you attempt to collect as many tiles as possible.

Players that decide to test the cascading cluster wins slot can do so by investing from €0.1 to €100. The awesome RTP and high level of volatility suggest infrequent wins, but when they do happen – they certainly are epic. 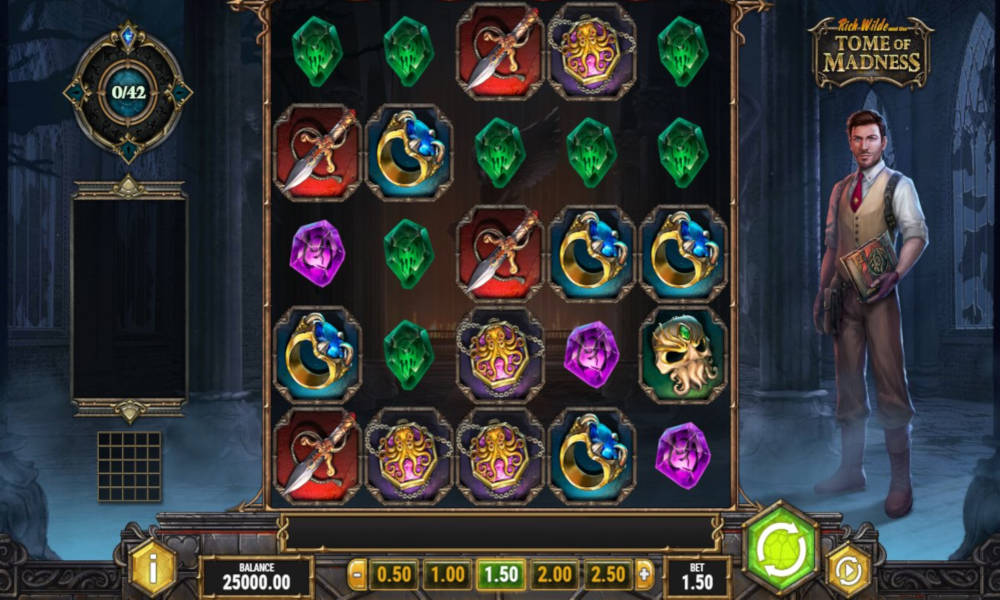 HOW TO PLAY Tome of Madness?

The Play’n GO’s Tome of Madness is a mélange of adventure, mystery, and exploration. It is reflected in every element of the game, starting from the design. The mysterious quote that is used right at the start of the game originates from H.P.Lovecraft, a writer responsible for creating the fictional place Cthulhu Mythos where the game is located. The symbol set consists of several stones of different colours that have lower values, and 4 different Cthulhu relics that have significantly higher values, including skulls, rings, daggers, and pendants. Look out for the Octopus pendants as they pay out 100x your bet if you manage to score 10+ matching tiles.

This is a cascading cluster win slot which means that to win, you will need at least 4 matching tiles that are touching either horizontally or vertically. The winning clusters then disappear, allowing more tiles to fall from above into the vacant spots.

The exquisite adrenaline-packed pleasure of collecting relics costs from €0.1 to €100 per spin on all devices. You can adjust your bet settings right below the grid. In case you get bored with clicking the Spin button, you can initiate Autoplay and sit back, relax, and watch the gems and relics flying by on the reels.

As expected, a Play’n GO title Tome of Madness is teeming with grand features. From sizzling wilds and opening the portals, your attention will constantly be occupied with an on-going feature (or two)!

Eye Marks– During spins in the base game you will notice a pink Eye mark on a random location in the grid. If a winning cluster lands in the place where the mark is, two Special Wilds will be added to the grid and potentially secure a new winning cluster.

Portal Meter – Perhaps the most important feature that you will find in the game. The meter is situated on the left side of the grid, and it displays your progress to the Other World Free Rounds. To fill the meter, just collect winning clusters. Consecutive wins charge the meter, but if there are no more wins during a spin, the meter resets so with each new spin, you start from scratch. However, there are a couple of perks waiting for you when you reach a checkpoint. Namely, once you collect 7 symbols, 2 Special Wilds will appear randomly on the reels. With 14 tiles, you get 2 Special Wilds plus the Abyss Portal Effect which destroys all tiles in the row or column where the Special Wild lies. The Abyss will not trigger unless the wilds are a part of a winning cluster.

With 27 tiles, you get the wilds which, if they are a part of a cluster, trigger the Void Portal Effect which destroys all instances of a randomly chosen symbol on the grid.

In both Portal Effects, the tiles that were destroyed by the feature will be added to your meter.

Other World Free Round – This feature is the closest version of Free Spins, except you don’t get rounds, but Portal effects. If you manage to collect 42 tiles via consecutive wins, you will be awarded 3 Portal Effects. However, if you manage to collect more than 42 you will get extra effects – 1 for every 3 extra tiles. The maximum number of effects that you can score is 7. And how do they work, you ask? It’s simple: if there are no winning clusters on the reels, one effect will be initiated to help you score a win. The Round lasts until you run out of Portal effects.

Mega Wild – During the Free Round, a dozen Eye Marks will appear on the grid. The Eyes open with a winning cluster landing in their places, and if you manage to open all eyes, you will release the Mega Wild symbol that slides down the reels and helps you score even bigger wins.

Despite being relatively new on the scene, Tome of Madness already proved it’s a worthy heir to the legacy of its predecessor Book of Dead. It confirmed that with Rich Wilde, you simply can’t go wrong.

The unique features bring a wave of refreshment to the audience. A fine cocktail of adventure and entertainment, this game is perfect for high rollers that like games with more risk. It can be pretty interesting for casual gamers as well, especially for those seeking an adventurous thrill.

However, before you embark on this adventure, make sure to arm yourself with patience. Due to the RTP of 96.59% and high volatility level, wins will be massive – but very rare.

WHERE TO PLAY TOME OF MADNESS FOR REAL MONEY:

Players, we need your help with how we should to rank and rate these reviewed casino games. You can help us by rating this game, and if you really enjoyed playing Tome of Madness. You can also share it with your friends on Facebook, Twitter and via email. For all freeplay games, if your free credits run out, simply just refresh the page and your balance will be restored.

PLAY TOME OF MADNESS AT THESE TOP RECOMMENDED CASINOS

Saxon
Saxon is a high-paying slot, perhaps one of the most rewarding of games in Play’n ...
Software:
Play'n Go
Reels:
5
Paylines:
10
RTP:
96.24%
Volatility:
High

Lady of Fortune
Just about every player who likes the thrills and rewards of video slots will want ...
Software:
Play'n Go
Reels:
5
Paylines:
15
RTP:
95.79%
Volatility:
Medium