Treasures of the Lamps

Heading our way from the creative kitchen of Playtech, Treasure of the Lamps is a sensual representation of the Arabic world, wrapped into the ever-green magic lamp motif which in this particular case is given a tasty twist.

Treasure of the Lamp is a 5 reel video slot with 20 paylines and an abundance of game features that will both keep you entertained and rewarded. Players can earn different prizes from three genies, enjoy the free spins and benefit from a Stargazer Bonus.

This slot title is a medium variance game with ant RTP standing at 95.15%. With a maximum jackpot worth 25,000x line bet, Treasure of the Lamps can yield some mind-boggling payouts.

TREASURES OF THE LAMPS SLOT GAME 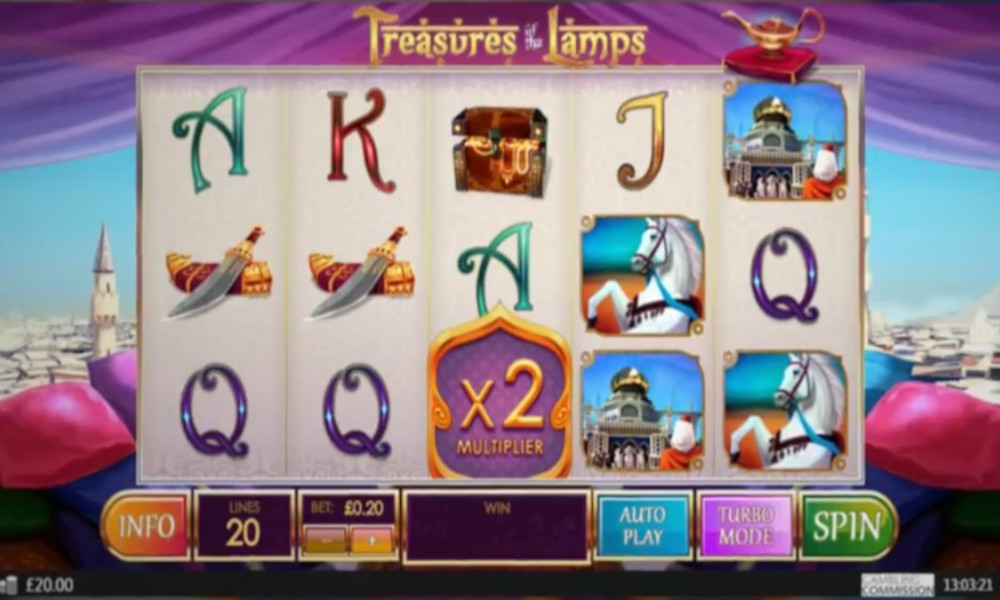 HOW TO PLAY Treasures of the Lamps?

The playing set consisting of five reels and three rows is set inside a room overlooking an Arabian landscape. Comfy pillows and purple drapes make for a romantic setting which is just the invitation to what’s waiting for you inside the game.

Playtech did not go the extra mile when it comes to the visual quality of the game which might be the only flaw we can find. Any apparent lack of graphical superiority is compensated by attractive and appealing visuals – most notably in three scantily clad lady genies which are portrayed across double blocks of symbols. Gloria, Ruby and Audrey are there to tease you but also reward you, together with other symbols that need to be lined up on a payline – at least three matching symbols – in order to land a win.

The male part of the gaming population will rush to spin the reels in hope to enjoy the sight of three beauties but they are advised to first set the gameplay to their own preference. Treasures of the Lamps slot comes with a wide range of possible bets – going from €0.20 to €200 – which makes it a perfect choice for a wide audience.

Game controls are suitably placed underneath the reels where you can also set the Auto Play option or click the turbo mode for an extra pace.

Treasures of the Lamps slot actually is an appropriate title for the game packed with features and winning potential. Playtech made sure to pack it full of surprises and even though it could look like its overwhelming and difficult to grasp, it is actually quite straightforward.

The Magic Lamp – A game such as this would not be complete without a magic lamp which actually acts as a Wild. It substitutes for all other symbols on the reels except the Scatter, but it can also summon one of three lady genies – Gloria, Ruby or Audrey.

Game Feature Scatters – Treasures of the Lamps comes with four different types of Scatters which are visually unified – consisting of a purple background and yellow – to golden – frame and lettering. Landing Scatters on different reels – 1, 3 and/or 5 – will trigger different features off of the Scatters. Players can benefit from 10 Free Games (or Bonus Picks – explained below) or a 5x multiplier. Additionally, you can choose from the Free Games or the Stargazer Bonus – if a Scatter lands of reel No.5.

Free Games – Everybody’s favourite feature will reward you with up to 30 complimentary rounds during which a mystery multiplier up to 5x will be applied. During this particular feature, the Magic Lamp can summon a genie on any spin.

Stargazer Bonus – will remove the reels from sight and present you with a star-packed sky. Your aim is to pick up to 30 stars in order to get cash prizes or multipliers. It needs to be noted that every star you pick will award a cash prize. Your aim is to collect stars in order to ideally form a colossal cash prize feature constellation. In this feature, genies will add an extra spice with Ruby there to award a cash prize and extra picks, while Audrey will automatically award several star prizes and, finally, Gloria will increase the size of the star cash prize.

Treasure of the Lamps might not be the most high-quality graphic production of the game but Playtech really turned it up a notch as far as the game features are concerned. This slot is quite appealing, however, especially for the male part of the gaming population which is an instant plus in favour of Playtech.

Three lady genies are there to grant your wishes in an action-packed gameplay which consists of all sorts of features, bonuses, multipliers, cash wins, free spins and respins. As a medium variance game with an RTP of 95.15%, this Playtech title will keep you both occupied and rewarded.

This game comes with a huge range of different bets you can make which makes it available for a wide audience. The huge win potential of 25,000x line bet caps the eventual jackpot at €5,000,000 which is remarkably enticing.

WHERE TO PLAY TREASURES OF THE LAMPS FOR REAL MONEY:

Players, we need your help with how we should to rank and rate these reviewed casino games. You can help us by rating this game, and if you really enjoyed playing Treasures of the Lamps. You can also share it with your friends on Facebook, Twitter and via email. For all freeplay games, if your free credits run out, simply just refresh the page and your balance will be restored.

PLAY TREASURES OF THE LAMPS AT THESE TOP RECOMMENDED CASINOS

Gold Rally
Gold Rally is one of the hottest slots offered by Playtech and while this game is ...
Software:
Playtech
Reels:
3
Paylines:
8
RTP:
97.01%
Volatility:
Medium

Wild Wishes
Wild Wishes is another amazing themed game that can be enjoyed for free or for real ...
Software:
Playtech
Reels:
5
Paylines:
15
RTP:
96.12%
Volatility:
High