Warcraft enthusiasts will surely appreciate one of the latest Yggdrasil products called Trolls Bridge which takes you into a fantasy world presented in a cartoon-styled manner on a grid containing 5 reels and 20 fixed paylines. Available across all possible devices and platforms, this feature-packed game offers 10,000 coins and plenty of free spins, multipliers and all kinds of wild.

Superbly designed, Trolls Bridge is more than just looks as its customary when it comes to Yggdrasil products. This particular game is aimed towards a wide audience thanks to its extensive bet range going from €0.20 to €200.

With an RTP of 96.03%, this medium variance game will keep you engaged with frequent wins and constantly on the run for that big prize, which is probably hidden behind that bridge. 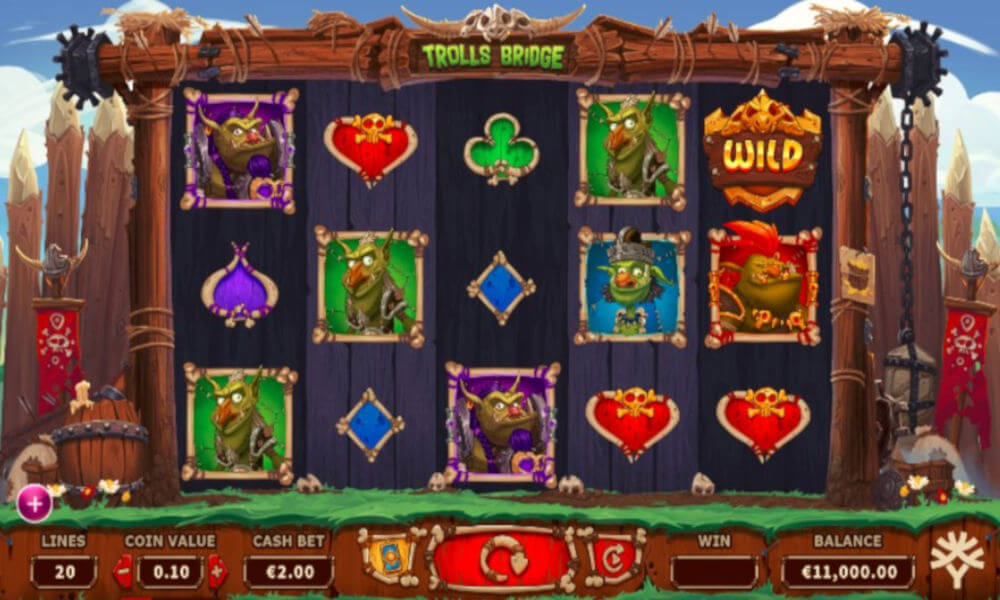 HOW TO PLAY Trolls Bridge?

Pack your bags for a trip back in history with Trolls Bridge video slot. The exciting medieval fantasy filled with trolls (and hefty winnings) is what this latest Yggdrasil slot title is all about. Known for their top-shelf games, Yggdrasil delivered yet another fantastic title which brings a colourful setting along with the cartoon-styled visuals, all wrapped in an action-packed gameplay.

The game is played, well, on the wooden bridge protecting the trolls from intruders like yourself. Symbols on the reels include four different troll characters and brightly coloured card suits – clubs, hearts, spades and diamonds – together with the Wild (oh boy are going to delve on this one further below) and the Free Spins Scatter.

Trolls Bridge houses 20 paylines oriented from left to right. You need three matching symbols on a payline in order to unlock the win. Before you go head-to-head with the trolls, however, make sure to adjust the game settings, found just below the reels. Coins range from 0.01 to 10, making Trolls Bridge a game which will be of great appeal to both casual players (with a €0.20 minimum) and high rollers (due to a €200 maximum).

A big red Spin button is surrounded by two additional options on each side – AutoPlay functionality going from 10 to infinity and a Golden Bet option which adds one Feature Pick in Free Spins feature for a bag of coins. More on that below.

Yggdrasil are known for their elaborate gameplays and feature-packed products. Trolls Bridge is not an exception to the rule as it comes with a rather eventful scenario that will keep you occupied and enticed throughout.

Wilds – The first thing we need to address here is the fact Trolls Bridge slot game comes with no less than four different types of Wilds. They will replace all symbols bar the Free Spins Scatter and the Bonus Pot symbol. One of the 4 types appears in the base game, while the other three are found during the Free Spins. First up is the Regular Wild he standardized version, appearing in both base game and free spins, without special powers. Next up we have the Random Wild, Sticky Wild and the Troll Wild, each of which appear during the bonus feature and either get stuck on the reels during the free spins, appear in random positions on the grid, or appear stacked to boost your winning chances.

Bonus Pot – Trolls Bridge online slot throws you into the action straight away thanks to the Bonus Pot feature, available in the base game only. It’s all about the Pot – obviously – which appears on the final reel to reward you with one of the following prizes:

Random Feature – should you miss out on the Golden Pot prize – or the free spins for that matter – you will be given a chance to land one of the consolation coin prizes in a random feature applied to losing spins. Those prizes include 100, 200, 500 and no less than 1,000 coins. Random prizes go well beyond the losing spins and will be given to winning ones as well, boosting your pot with random multipliers – either 2x, 3x, 4x, or 5x.

Free Spins – activated if you land three Free Spins Scatters or through the Bonus Pot. Before these start, you will be given an opportunity to choose from a set of cards in order to reveal hidden features that will be applied during your free spins. Depending on the number of triggering Scatters, you will be given 6, 8 or 10 free spins with 3, 4 or 5 feature picks, respectively. There are 18 cards to choose from in total, carrying up to 3 extra free spins, up to 2 random multipliers placed on each spin, sticky wilds in multiple positions or highest paying Trolls both stacked on the reels and turn into Wild symbol.

Golden Bet – Not exactly a feature but more of an additional option that can be activated for an additional 5 coins per spin will give you an additional feature pick once you enter the Free Spins Mode.

If you thought Trolls Bridge was just another happy-go-lucky cartoon-styled game filled with creatures of fantasy and myth, you’d be dead wrong. This Yggdrasil product could not have been more elaborate in terms of gameplay and is as eventful as it is colourful.

Yggdrasil Gaming made sure to pack it full with all sorts of features and playable combinations that will keep you on the edge of your chair the whole time. Trolls Bridge slot includes two base-game features and a wonderful combination of Free Spins and pick-me features to make your each playing session unique.

You will rarely get a same spin twice once you get into the Free Spins mode where no less than 18 pickable cards carry extra free spins, multipliers on all wins or random wilds which are sticky or stacked. What more could you ask for?

WHERE TO PLAY TROLLS BRIDGE FOR REAL MONEY:

Players, we need your help with how we should to rank and rate these reviewed casino games. You can help us by rating this game, and if you really enjoyed playing Trolls Bridge. You can also share it with your friends on Facebook, Twitter and via email. For all freeplay games, if your free credits run out, simply just refresh the page and your balance will be restored.

Medusa: Fortune & Glory
Graphics and the design of the slot will amaze even the most demanding of players. ...
Software:
Yggdrasil
Reels:
6
Paylines:
4,096 Ways to Win
RTP:
96.62% RTP
Volatility:
High
VIEW ALL GAMES