Tut’s Twister is a 5 reel and 25 payline ancient Egypt themed video slot available at online casinos offering the fantastic Yggdrasil Gaming content. The players are brought inside the King Tut’s tomb where a selection of marvellously engaging feature awaits to reward them with no less than 125,000 coins.

This thematic title is powered by high-definition graphics and a line of special features. The players will enjoy King Tut transforming into a wild sandstorm blazing across the reels and rewarding them with a column of wilds, whereas there are all sorts of other – both engaging and rewarding – details to be expected.

Tut’s Twister is a medium variance game with an RTP of 97.10% which will guarantee frequent wins and an exciting playing time throughout. In addition to twister Wilds, players will get respins, multipliers and mystery prizes which will keep them well entertained. 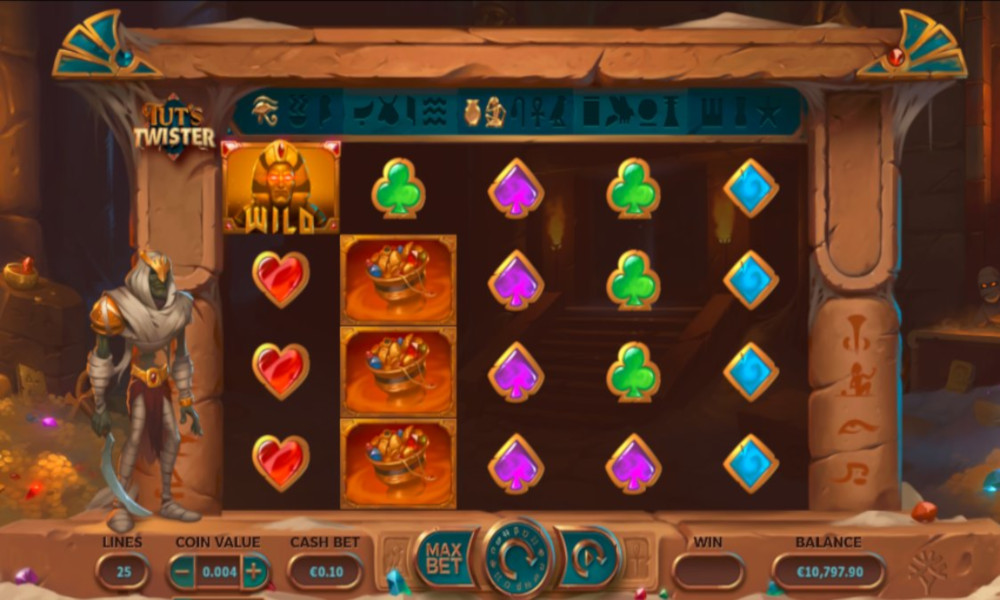 HOW TO PLAY Tut’s Twister?

This great-looking Yggdasil slot game has a typical Egyptian feel to it as the players will be thrown into action straight up with reels placed inside the tomb and surrounded with ancient treasures of the greatest of all Pharaohs.

Tut himself will be standings beside the grid, waiting for his chance to wreck havoc on the reels so you better make sure to make all the required adjustments prior to hitting the spin button. You should first select the coin denomination and determine the amount you want to spend on each spin. There is also the Options tray available where you will be able to get informed about the paytable, game history and select other options like game speed, volume etc.

As for the game itself, Tut’s Twister in working on a usual gameplay where you need three matching symbols from left to right in order to get a win. The game comes with eight different symbols plus a Wild. Playing card suits in form of precious stones are the lower denominations, whereas the ring, a scroll of paper, a pendant of sort and a pot full of gemstones are the most valuable symbols in the game.

Yggdrasil have already built quite a reputation with their unpredictable slot games and are known to publish products that come with unusual features that do not fit the common mould of slot making. Tut’s Twister is exactly one such game.

Twister Collection Feature – Once you launch the playing screen and the game loads, you will be awarded two hieroglyphs. You should note that each reel in the game has its own collection of those and it’s your job to try and fill an entire reel’s collection in order to trigger Tut’s Twister. The triggered reel will give you 1 extra Wild for each of the hieroglyphs you have collected.

Tut’s Twister Feature – We’ve already introduced it but Tut’s Twister is a feature in its own merit. It will become active through the collection feature but can also be initiated by landing at least two Wild symbols on the reels. The Twister acts as a locked wild reel to increase your winning chances, but the best thing about Tut’s Twister is that it awards respins with walking Wilds and an increasing multiplier.

Last Chance and Final Spin – Remember, Tut’s Twister respins last as long as you have at least one walking wild on the reels. But Yggdrasil made sure to give you one last chance to get a win even when there are no more Wilds on the reels. you will get 1 extra respin and you better hope that an extra Wild will appear to keep the feature going. If no Wilds land on this last Chance spin, Twister will hit the stage by throwing all accumulated Wilds across the reels to suck them in in the Final Spin all with previously accumulated multiplier applied to that final win.

Mystery Feature – Players should not get discouraged by landing only one Wild on the reels. It might not be enough to launch the Tut’s Twister feature but little do they know that Yggdrasil made sure to incorporate a mystery feature launched by singleton Wilds. One wild on the reels will turn into one of the following – 1 hieroglyph, an Extra Wild (triggering Tut’s Twister), a win worth 25 – 2,500 coins and an empty symbol with no win it.

It might be the case with most of the latest slot games coming from Yggdrasil’s creative kitchen but their games are not as complicated as it appears. This company is revolutionizing the way slot games are built and the players should not be deterred by a constantly growing touch of innovation and ingenuity.

Tut’s Twister is actually a simple game which does not come with a Scatter or Free Spins but has more than enough features to keep you occupied for hours. You will be collecting hieroglyphs and Wilds to initiate the Twister respins – where multipliers and mystery features will be there to put a wide smile on your face.

As a medium volatility online slot, Tut’s Twister boasts an engaging gameplay with non-stop action in it. This particular video slot is available to play on all possible devices and platforms, and is quite affordable with its wide range of possible bets which start at €0.10.

WHERE TO PLAY TUT’S TWISTER FOR REAL MONEY:

Players, we need your help with how we should to rank and rate these reviewed casino games. You can help us by rating this game, and if you really enjoyed playing Tut’s Twister. You can also share it with your friends on Facebook, Twitter and via email. For all freeplay games, if your free credits run out, simply just refresh the page and your balance will be restored.