Valley of the Gods 2

Yggdrasil Gaming is taking you back to the desert! Revisit the Valley of the gods with the sizzling sequel to the story. Valley of the Gods 2 is bringing back to life the ancient legends that spoke of immeasurable treasures. Your task in the new 6-reel slot release is to destroy the blocks and reveal precious stones beneath. Doing so will release powerful spirits to the reels – and with them open thousands of new ways to win.

As for the features, get ready for a show. Yggdrasil tried to keep it simple, but that’s not easy with such an amazing slot. The game is loaded with boosters and modifiers designed to bring excitement to your screen. The remarkable features like Lives and Multipliers are back again, and a brand-new Wild Reel feature joins them. Don’t hesitate to crush the blocker stones from the reels. If you manage to remove them all, you will be able to activate one of these special features.

A decent 96% RTP and medium-high volatility are capable of creating sandstorms on your screen during base gameplay. You can place €0.10 as minimum wagers to roll the reels, or you can opt for the max bet which is €100. Valley of the Gods 2 slot performs great both on mobile and desktop devices, so pick the one you like more and play away.

VALLEY OF THE GODS 2 SLOT GAME 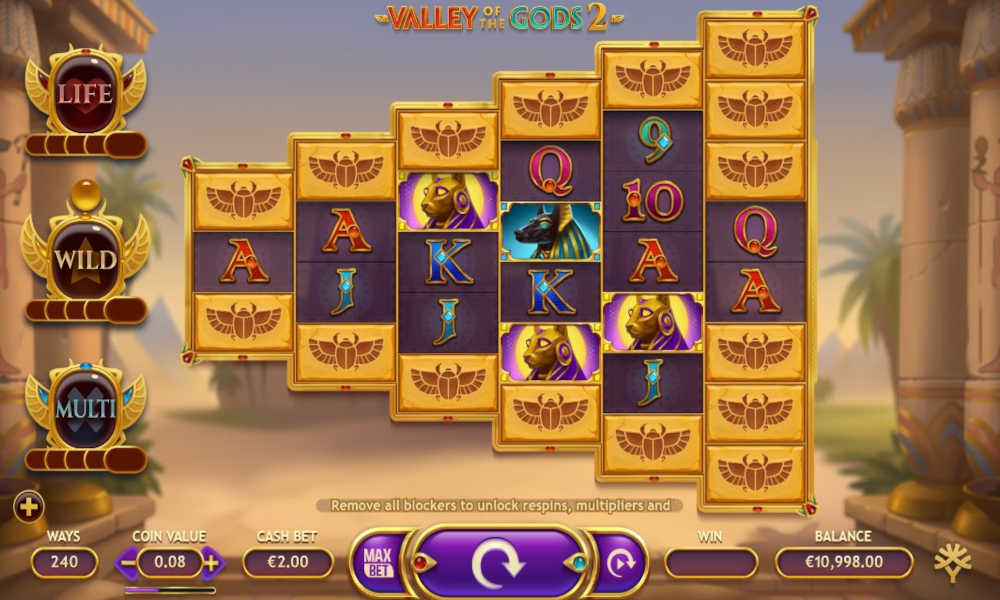 HOW TO PLAY Valley of the Gods 2?

Three years ago, Yggdrasil Gaming launched its Valley of the Gods slot. The Egyptian-theme never goes out of fashion, and so the software firm expected that the game would find success on the international market. But little did they know what kind of success was waiting for the game. The slot quickly shot to fame due to its great potential, innovative features, and astonishing rewarding nature. And three years after the first release, Yggdrasil decided to give the story a continuation.

Valley of the Gods 2 greatly resembles its predecessor, but that’s mostly because Yggdrasil wanted it to. The elements and features that we loved in the first part are here, as well as recognizable stone blockers with scarab beetles painted across. So far, so good. But don’t think that’s the end of it! Valley of the Gods might look similar to the original, but the new slot is not without its unique characteristics. What sets it apart from the first slot is the number of paylines, as well as the grid layout. Gone are the 5×5 reels, in come six reels with expandable rows. Left to right, there are 3-4-5-6-7-8 rows, each with two icons covered with a blocker. The last reel has six scarab blockers.

On the reels, you will encounter a collection of card royals from 9 to A. They are low-pay icons; the gods are the premiums. Horus, Sobek, Anubis, and Bastet roll across the reels, and if you manage to get three matching icons on adjacent reels, you win. At the beginning of the game, you will use 240 ways to win. As you trigger wins, the blockers will clear out and create room for more combos. This helps increase the number of betways up to 20,160 ways to win.

Instead of regular boosters, Yggdrasil added the famous Valley of the Gods features along with a brand-new one. Have a look:

Statistically speaking, creating sequels is a risky business. The Godfather II aside, there aren’t many examples of successful continuations of famous stories. However, it seems that Valley of the Gods 2 is about to challenge that and prove it wrong.

The exciting new Egyptian-themed slot features a whole shebang of features and boosters, including the familiar Lives and Multipliers. The only change is the new Wild Reel – which has the power to boost your winnings even further.

Valley of the Gods 2 comes with a 96% RTP, medium-high volatility, and 20% hit frequency. You can play with 240 ways to win or enjoy over 20,000 of them via special features. The max payout amount that you can win is 5,481x the stake. The game arrived first at Mr Green for an exclusive release, but it will soon be available in all Yggdrasil online casinos.

WHERE TO PLAY VALLEY OF THE GODS 2 FOR REAL MONEY:

Players, we need your help with how we should to rank and rate these reviewed casino games. You can help us by rating this game, and if you really enjoyed playing Valley of the Gods 2. You can also share it with your friends on Facebook, Twitter and via email. For all freeplay games, if your free credits run out, simply just refresh the page and your balance will be restored.

PLAY VALLEY OF THE GODS 2 AT THESE TOP RECOMMENDED CASINOS

Hades Gigablox
Yggdrasil Gaming was not kidding when they announced they have big plans for the ...
Software:
Yggdrasil
Reels:
6
Paylines:
50 Paylines
RTP:
96%
Volatility:
High