Valley of the Gods

For a company that thrives when faced with challenges, Yggdrasil Gaming proved it’s a champion of slots. Regardless of the theme, there’s nothing this game producer can do! The living proof is the Valley of the Gods slot release. Launched in 2017, the slot continues to amaze slot players all over the world. Join us for a spin around this 5-reel slot and discover 5,800x the stake wins.

The slot brings forth a revolutionary set of game modifiers. For the first time, you can play a slot that resembles real video games. Destroy blocking scarab tiles to launch Win Multipliers, which increase with each win. Respins keep the game going for as long as you can form winning combos, and if you are lucky enough, you can collect Extra Lives.

The exciting Egyptian-themed Valley of the Gods video slot comes equipped with five reels, five rows, and uplifting visuals. You have up to 3,125 ways to win here, so make it worthwhile! The game has medium volatility, so you don’t have to worry about long dry spells. Valley of the Gods is perfect for desktop and mobile play with a €0.10-€100 betting range. Taking into consideration these details, it’s easy to see why this game is an excellent choice for medium rollers. The risk is not high, but it’s certainly rewarding – you can get up to €580,000 with the maximum bet.

VALLEY OF THE GODS SLOT GAME 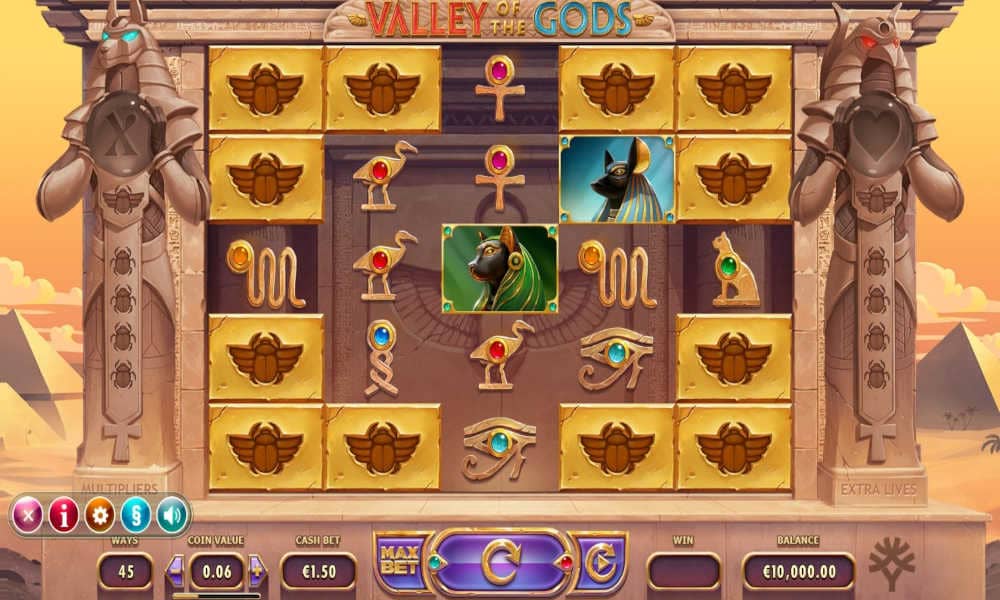 HOW TO PLAY Valley of the Gods?

There’s an on-going debate about Egyptian and Asian themes in slots and their popularity. Players cannot decide which one they like more – and if you ask us, we wouldn’t be able to pick a favourite. The Egyptian genre has produced hundreds of video slots that populate top online casinos. And guess which one is right there at the top of the list? You guessed it right – it’s Valley of the Gods. After Tut’s Twister, Yggdrasil decided to delight its fans with a smashing Valley of the Gods hit. After several years on the market, the company is still surprised by the level of fame this game achieved. It’s so popular that the game producer decided to launch a sequel – Valley of the Gods 2 marked the entire 2020 in casino gambling. For that special occasion, we had a chat with Marcin Gorka, the Game Producer over at Yggdrasil Gaming. You can check the interview right here.

But getting back to Valley of the Gods – what’s the game all about? Well, the backdrop leads in the story by introducing the desert and pyramids. The reels are half-covered with scarab blockers that hide great features once you destroy them. Among the symbols, there are six low-pay and four high-pay icons. The low-pay are classic Egyptian symbols like cats, the Eye of Horus, Ankh, Bennu birds, and similar. The premium icons are Egyptian gods, because what would be the purpose of the Valley without the gods, right?

To play the game, you need to destroy the game blockers that are placed on the grid. Nearly half of the icons are covered with blockers which you eliminate with each win. Winning combos erase the scarab beetles, and if you succeed in removing all 12 blockers, you get to play with special features. Valley of the Gods has medium volatility and 96.2% RTP. After you clear out the blocking icons, you can activate up to 3,125 ways to win.

If you like innovative slots that take on themes of mythology and exploration, look no further than Valley of the Gods. The exciting video slot features a plethora of ingenious elements which real fans of Egyptian-themed slots appreciate.

In this slot, you can collect Win Multipliers and boost your winnings with each Respin after a win. But that’s not all – Yggdrasil threw in Extra Lives too, so even if you have a spin without a success, you can continue your adventure.

WHERE TO PLAY VALLEY OF THE GODS FOR REAL MONEY:

Players, we need your help with how we should to rank and rate these reviewed casino games. You can help us by rating this game, and if you really enjoyed playing Valley of the Gods. You can also share it with your friends on Facebook, Twitter and via email. For all freeplay games, if your free credits run out, simply just refresh the page and your balance will be restored.

PLAY VALLEY OF THE GODS AT THESE TOP RECOMMENDED CASINOS

Age of Asgard
The time for heroes has come! Age of Asgard is the latest gem to come from Yggdrasil’s ...
Software:
Yggdrasil
Reels:
5
Paylines:
40
RTP:
96.30%
Volatility:
Medium

Medusa: Fortune & Glory
Graphics and the design of the slot will amaze even the most demanding of players. ...
Software:
Yggdrasil
Reels:
6
Paylines:
4,096 Ways to Win
RTP:
96.62% RTP
Volatility:
High
VIEW ALL GAMES