Superhero-themed slot has always been of a particular appeal to casino players around the globe and specialists from NetEnt have decided to latch on this big topic and add a sweet twist to it. Wild Worlds is an innovative 5 reel cluster pay the multi-level game with newly introduced Hero Wilds, Destroy and Boss Fights Features bound to provide endless fun.

The introduction of first-time features is what NetEnt are especially proud of in Wild Worlds which – additionally – comes with thrilling Free Spins Worlds where our superheroes – which are all birds by the way – launch attacks on evil monsters threatening our very own existence. 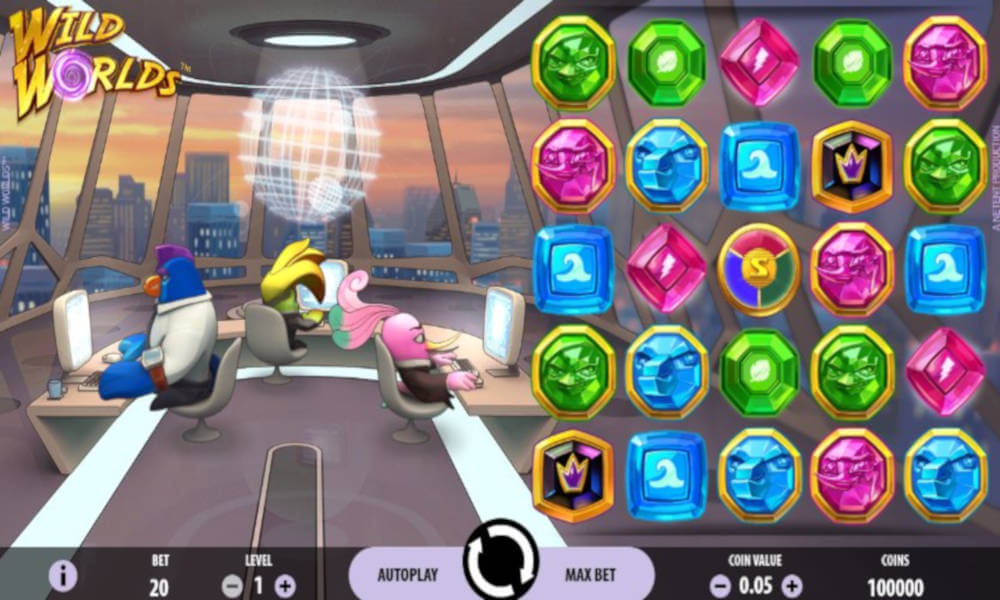 HOW TO PLAY Wild Worlds?

Wild Worlds slot comes bursting forward with a group of superheroes tasked with saving our planet from evil monsters. The symbols on the reels include a selection of gemstones depicting our heroes faces – in blue, purple and green – whereas the low paying denominations are – guess what – more gemstones.

A crown-like gem is the most expensive one whereas the selection is completed with multi-coloured S gem acting as Scatter and the W gem – obviously – used as a Wild symbol.

The game deploys a cluster pay mechanic which means there are no winning ways involved and that symbols fall into the place of those exploding ones that are part of the winning combination. The players get a win by landing lines – both horizontally and vertically – of 3 or more matching symbols.

Once you manage to land a winning combo on hero gems, all remaining hero symbols on the gris will turn into Wilds to boost your chances of winning big(ger). The coolest thing about this game is that wins can be intersected on the same row and reel, knowing that columns and rows can contain more than one win. An even cooler thing is the feature called Destroy which activates randomly on a non-winning spin to destroy all symbols but those of one colour.

NetEnt have created a highly dynamic visual presentation here by splitting the screen in half. On the left, you get to see the inside of the superhero headquarters where commands are being made and attacks launched from. On the right, you have a 5×5 grid of symbols where all the spinning action takes place.

Before you put the cape on and fly to rescue, make sure to adjust the game controls. You can choose from 10 bet levels with coins ranging from 0.01 up to 2 in value. Being a game with a rather extended bet range, Wild Worlds will be available to many different types of players.

NetEnt have a reputation that precedes them. The company is well known as a creator of top-notch games that are rich in high-quality graphics and boast greatly engaging mechanics. This can be said to Wilds Worlds as well given it comes with a hatful of special features.

Your aim is to fight the monsters and in order to do so, you will have to enter the wild worlds. There are two types of monsters here – Captains and the Boss. Both types have individual health points: Captaing 15, Boss 105! So how do you destroy them?

Free Spins Worlds – you will destroy the monsters by entering the Wild Worlds through the free spins feature. In order to activate it, you need three Scatters. The action starts with a Wheel where you get to choose one of the following Worlds:

All three worlds are entered with eight free spins in your bag. As a hero, you will be launching attacks with a win on a Hero symbol charging the corresponding meter. You will need three charges to fill the hero meter. Once full it activated a Hero Special Attack.

Hero Special Attacks – our three heroes come with corresponding low and medium symbol which is here used to activate the Hero Attacks. Our birds will inflict different damage to monsters with Blue Hero dealing one damage point to all monsters. As for the Pink Hero, she deals one damage point four times to random monsters, while the Green Hero deals four damage points to a single random monster.

NetEnt are constantly pushing the limits and redeveloping our own perception of online slot games. Their innovative – and rather engaging – Wild Worlds slot is a combination of a video game and a casino game.

It combines best of both worlds and seamlessly incorporates engaging elements into a fantastically functioning unit. You will be taken into the heart of action as you unlock doors to secret Wild Worlds where destroying monsters will give you coins and satisfaction that you helped turn this planet into a much safer place.

Wild Worlds by NetEnt is a medium volatility game with plenty of things going on. It got thrills, it got chills and it got coins. With it – that’s guaranteed – you won’t feel bored. Just put your cape on and join our bird heroes in their world-saving escapades.

WHERE TO PLAY WILD WORLDS FOR REAL MONEY:

Players, we need your help with how we should to rank and rate these reviewed casino games. You can help us by rating this game, and if you really enjoyed playing Wild Worlds. You can also share it with your friends on Facebook, Twitter and via email. For all freeplay games, if your free credits run out, simply just refresh the page and your balance will be restored.