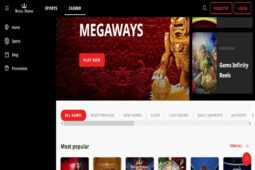 Royal Panda casino is an instant-play online casino operating under the management of Royal Panda Limited. It offers gambling services to players across the globe, including Europe, Africa, Asia, and elsewhere around the globe.

The operator is regulated by Malta Gaming Authority as well as incorporated under Leo Vegas corporate license. It used to own a UKGC license and operate in the UK market, but the website does not display such info anymore. Royal Panda is not working in the UK anymore, and the site redirects players to LeoVegas.

Due to their international reach, Royal Panda supports several languages, thus enabling its members to explore the offer in their native language. The site is particularly popular with Germany and Canada-based players, hence these customers have a treat – their favourite local payment methods.

Royal Panda features hundreds of slots, casino games, video poker variants, scratch cards, live games, and jackpots. The content comes from top-tier providers, and you can test it for free more – or deposit real money. Furthermore, Royal Panda carved a cozy portion of the lobby for live dealer tables and virtual sports betting too. This delivers to the registered punters a more authentic gambling environment.

The diverse gaming selection is not the only perk of holding an account with Royal Panda casino. New members can claim a Royal Panda welcome bonus and participate in the operator’s loyalty program, conveniently named Loyalty Panda. Earning comp points on every casino visit gives you a chance to exchange them for various gifts, too. You can swap them for gadgets or travels, or even donate to charity. Moreover, additional promotions launch regularly, of course. The depositing members will often get to claim free spins, cash prizes, free sports bets and other available perks.

“Everything you need in one place – professional customer service in English and Japanese, rich gaming catalogue, and progress-based loyalty system which makes every casino visit count.”

Is It Reliable to Play at Royal Panda Casino?

The Royal Panda online casino site boasts a reputation for reliability. Operating since 2014, it has a relatively long track record of satisfied customers.

More importantly, it’s licensed by one of the most reputable remote gambling authorities around – the Malta Gaming Authority. This gives all customers a degree of protection, but it also sets the standard as a respectable, legit online casino.

It’s worth noting that Royal Panda used to also be licensed in the UK, but they voluntarily left the market. In other words, the service itself had to conform to some of the strictest regulations in the online gambling business. However, increasing gambling taxes and political instability surrounding Brexit caused a sort of exodus of gambling sites from the UK. Royal Panda was one of the bigger brands that decided to leave.

Beyond that, we can only point out a responsive and effective customer service and air-tight security. All of the facts we have point to the fact that Royal Panda is a trustworthy site to satisfy your gambling needs.

In Which Countries Does Royal Panda Casino Operate?

Royal Panda has grown quite a lot since its inception and now offers internet gambling services across the globe. However, even for such an international brand, some countries are off-limits. The Royal Panda terms and conditions indicate that the site does not accept registrations from certain countries.

Currently, the list of Royal Panda restricted countries includes Afghanistan, Curacao, Cyprus, Ethiopia, Iran, Iraq, Kuwait, Somalia, Syria, U.S.A, and Yemen. This restriction also extends to any other state or jurisdiction where residents are not permitted to gamble online.

That said, it also appears that Royal Panda currently does not have a UKGC remote casino license. This means that residents of the UK can’t access the site either.

Beyond that, the brand is a true international operation. It has reach in many large markets, including the EU, Canada, New Zealand, and Scandinavia.

The site itself is especially attractive for people who like various kinds of online gambling. Besides online casino games and a live dealer section, Royal Panda also offers sports betting.

Royal Panda casino offers a well-rounded service, ticking all the essential boxes of a competitive, user-friendly gambling site – massive selection of games, multilingual customer support, and engaging promotional program. The efficient and speedy withdrawals are one of the casino’s strongest points, which, combined with high payout limits, really places Royal Panda in an advantageous position over the competition.

Add all this to the renowned regulatory body that monitors the casino operations (MGA) and an active social media presence (Facebook and Twitter pages keep the followers up to date with the latest promotions or game releases), and you got yourself a winner.

Is Royal Panda available in India?

Yes, this casino accepts players from India. Indian customers have access to the full range of available options, including sports betting and live casinos. The only exceptions are residents of states that explicitly ban all online gambling.

Does Royal Panda have an app?

No, you do not need a mobile app in order to use Royal Panda on mobile. Simply access the site through the internet browser on your mobile device and play on the go.

Yes, Royal Panda is a licensed, trusted, and legitimate online casino operator. Its main MGA license allows it to offer online gambling to players in many parts of the world. The site and all of the games on it are also vetted for fairness, ensuring your safety as a customer.

The name of the company registered for this site’s licenses is Royal Panda Limited. The company is based in Sliema, Malta. In 2017, Royal Panda was purchased by the online gambling giant LeoVegas.

Is Royal Panda legal in the US?

No. Unfortunately, Royal Panda is not currently licensed or available in any US state.

Royal Panda is owned and operated by a company called Royal Panda Limited, based in Malta. As the name implies, the operator itself only governs this one single casino. However, it was purchased on October 2017 by LeoVegas, one of the biggest online casino companies in the world.

LeoVegas does share some similarities with this casino. Both boast comprehensive, diverse offers with many different kinds of casino games and promotions. Both also mainly focus on Europe. Of course, LeoVegas is a much larger site and a much bigger brand. However, it’s clear that the underlying model both businesses use is similar.

Royal Panda can also be compared to other medium-sized operations such as Rizk. Of course, Royal Panda is more concerned about a respected reputation, with a more clearly “serious” design and approach to business. King Billy Casino also draws some similarities thanks to their huge, Microgaming-powered offers of slot games. However, King Billy is clearly more focused on markets such as Canada and Australia.