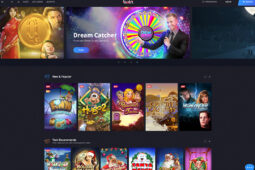 Twin Casino is an online casino catering to players in Canada, Sweden, and all parts of Europe. The site joined the flourishing online gambling industry in mid-2017. Since then, it has had more than enough time to acclimate and create a memorable offer for potential customers. And customers have noticed and appreciated it – the site is one of the most popular casinos on the international scale.

The site boasts simplicity and a creative way of categorising its 3,000+ titles. Its design suits the taste of modern-day online gamblers. Also, the platform is available across various gambling channels including PCs, smartphones and tablets. Moreover, this online casino uses the services of leading providers and features numerous lucrative bonus opportunities. In other words, Twin Casino is here to stay and establish itself as a world-class option for players worldwide.

Launched in 2017, Twin Casino boldly entered the already packed online gambling market. This casino site attracted attention thanks to its simple, yet modern design as well as excellent mobile gambling platform. Moreover, Twin Casino has an interesting approach towards its offers and services, all of which carrying cool names to suit the casino’s title. Therefore, players should expect lots of Twinning, Twins and other Twintastic terms.

This gambling destination is owned and operated by Oring Ltd, a Maltese company. At the time of writing this review, the site boasted an MGA gambling license. Unfortunately, the casino does not accept players from the UK, Australia, and the USA. Scroll down to find other interesting details in our Twin Casino review.

Even though it hasn't been long on the market, Twin Casino shouldn’t be overlooked by players. This gambling site holds two reputable gambling licenses, features games by popular software providers and offers impressive bonuses. In other words, it deserves a chance to prove gamblers that it has the potential to become a well-established name among the top players.

"The Casino's twin concept puts a fun twist to the typical online casino and it's got us buzzing. Double bonuses, amazing game choice and an easy to navigate website."
CasinoTopsOnline.com - Reviews Editor
PROS
CONS

While playing at Twins Casino, players can rest assured that they are playing at a safe and reputable venue. The operator is licensed and regulated by the Malta Gaming Authority, a reputable organization responsible for constantly scrutinizing the casino’s actions and ensuring that all players are treated fairly. In addition, this licence reflects the operator’s integrity and their commitment to abiding by the MGA’s code of conduct and strict regulatory requirements.

Even though you will not see any evidence of fair game verification by organizations such as eCOGRA, Twin Casino games are no doubt completely fair enough, offering every player an equal chance of winning. All your personal information is safe and protected, thanks to SSL encryption which guards all of your transactions.

If by any chance you run into a problem of some sort, you can always reach out to the Twins Casino customer support team. Simply click on the speech bubble at the bottom right of the page, and you will be connected to a representative in no time. The live chat function ensures that you will hear from a customer support agent within 30 seconds. Alternatively, you can also reach them by e-mail, if that is more to your liking. For all other questions, you can also refer to their extensive FAQ page before reaching out to the team. It offers a wide range of answers to the most commonly asked questions.

Furthermore, the operator aims to keep their casino a source of excitement, entertainment, and fun. The moment it is not, Twin takes it very seriously. That is why their website features a dedicated page where you can find information about tools that will help you play responsibly, as well as contact information to organizations that give expert help to people who experience gambling problems.

In Which Countries Does Twin Casino Operate?

Twin Casino prides itself on being a clear-cut casino created for those who love casino games and good online entertainment. The operator makes sure to look after its players while giving them a safe and reliable site to play on. Twin Casino delivers excellent games, great offers, and cutting-edge user-functionality that provides an unparalleled casino experience.

With that being said, some players will unfortunately not be able to experience everything Twin Casino has to offer. As you already know, there are some countries with pretty strict restrictions regarding online gambling or prohibit it completely. Residents of such countries, will not be able to register their accounts at Twin Casino.

With a licence from Malta Gambling Authority, this operator mainly targets the European market, mainly countries such as Finland, Germany, Norway, and Sweden. In addition, this online gambling venue also welcomes players from Canada and New Zealand, as well.

Best Casinos offers a full list of restricted countries on our site. Make sure that Twin Casino allows players from your place of residence before you decide to open your account. If there are still doubts about whether you are eligible to play, do not hesitate to contact their customer support service. Their agents are available around the clock and usually respond within 30 seconds, ready to answer all of your questions.

If you want premium gambling entertainment and a safe experience, Twin Casino is a destination that deserves your attention. Customers at Twin Casino are treated with utmost respect and pampered with appropriate bonus offers. Moreover, they are given access to more than 3,000 games by leading providers like NetEnt and Microgaming. When the combination of great picks and bonuses is spiced up with the casino’s sleek design, top support and reasonable banking policy, what players get is a top site where they can enjoy their favourite games anywhere and anytime.

Twin Casino is licensed and regulated by the Malta Gaming Authority; the independent organization responsible for overseeing all gaming activity in Malta. The licence reflects the operator’s integrity and commitment to abide by the MGA’s code of conduct and strict regulatory requirements.

Are games at Twin Casino fair?

All the games available in the Twin Casino lobby have been developed by the top gaming software providers. This online casino only uses trusted and regulated providers, thus guaranteeing that no one interferes with the games. They use a random number generator certified and audited by an independent third party. Additionally, all of their games are regulated by the MGA.

Can I get in touch with Twin Casino?

Of course. If you ever run into a problem, you can contact their customer support 24/7 via e-mail and Live Chat. Twin Casino also offers a callback option for players who prefer this channel of communication.

Is my money safe at Twin Casino?

Thanks to the Malta Gaming Authority, you can rest assured that the regulator constantly verifies and ensures that the operator covers all the players’ account balances. All of your monetary transactions are secured via their payment methods, which are PCI DSS compliant. This is the Payment Card Industry Data Security Standard that safeguards your data and funds when using credit cards.

Is my data secure at Twin Casino?

Twin Casino website is protected by cutting-edge SSL encryption technology, ensuring that your personal data will be kept entirely private.

Ready to Play at Twin Casino?

Twin Has a Bonus Easter Game Where You Can Win Amazing Surprises
April 16, 2020
Twin Casino

Find Your Match and Win a Share of €20K at Twin Casino
February 14, 2020
Twin CasinoYggdrasil
VIEW ALL

There is absolutely no reason whatsoever you should skip Twin Casino. If you are a fan of slots, a variety of card games, and live casino, this operator will provide all this and more. However, if you wish to check out other casinos similar to this one, make sure to check Best Casinos’ detailed and unbiased reviews of all the best online casinos on the market. Or casino review page contains information on all the top operators such as Rizk, PlayOJO, BitStarz, and many more.

As we have mentioned before, Twins Casino does not accept players from the USA and the UK. If you are a resident of these countries, you might want to look for an online casino that offers services to these two markets. USA residents can take a pick of many reputable venues such as Drake Casino, Bovada, and 888. The UK players also have a multitude of great options such as Mr Green, Spin Rio, and Casumo.

Furthermore, if you are more of a sportsbook, than a casino games fan, make sure to check out the top online operators that offer sports betting services such as LeoVegas and William Hill.