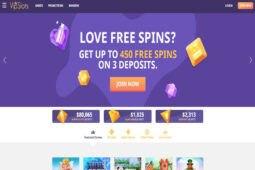 VipSlots casino is an online gambling site catering to players primarily residing in the USA, Australia, and Canada. The site accepts players from all parts of the world, though. The brand has been a part of the gambling milieu for several years and has gathered a massive player base. Its loyal fans regularly check in to enjoy its numerous games and promotions.

As you might have guessed, this is primarily an online slot casino site. It is primarily focused on bringing the best slots, free spins, and promotions for fans of the good old fruit machine. There’s a rudimentary live casino section available, but it’s not very developed. We assume this site will be most interesting to those of you who want to play online slots in the US or Australia.

It’s not without issues, though, as is, unfortunately, the case with most US/AU-focused online casinos. Namely, the licensing is not as strong as we like. And you get fewer withdrawal options due to harsh online gambling restrictions in those markets. Moreover, the game portfolio is not that impressive when compared to some of the competition.

VipSlots casino is a popular place for US players – and you are about to see exactly why. Thanks to Betsoft and Arrow’s Edge games and regular casino bonuses and rewards, VipSlots is one of the most recognizable brands.

Is It Reliable to Play at VipSlots Casino?

The question of safety can be tricky to answer when dealing with USA casinos online. Due to the country’s inconsistent online gambling laws, there is no real licensing authority.

Let’s start with security. With SSL encryption and several complex security protocols, you see this venue’s dedication to protecting its customers. They also have a healthy track record with no issues with security or information protection.

The casino has been working since 2017, but the VipSlots casino brand itself is not new. In fact, it was a big name in the early days of online gambling. All of that kind of fell through after the US federal government clamped down on online gambling in 2006. The site then remained inactive until 2017, when it was acquired and re-opened by CyberRock Entertainment NV. This VipSlots casino review is of this relaunched version, with new games, a fresh interface, and more.

The casino operates under a Curacao online gambling license. The license itself is not highly-regarded among online casino fans, simply because it does not require a high standard of quality. We’ve seen shady sites operate with Curacao, which is generally an issue.

VipSlots is a legit US gambling site, however, that much is clear. We just feel obligated to inform you that the licensing itself is not the strongest out there.

In Which Countries Does VipSlots Casino Operate?

As we mentioned previously, North America is the focus market of VipSlots, and has been since its inception. Australia is another target audience, and a good chunk of this offer is geared towards players from these countries. Of course, players from most other places are accepted as well. We just feel that, for instance, European players frankly have much better options.

Also, not all US states have access to the site. Players from the states of Kentucky, Louisiana, Maryland, Missouri, New Jersey, Oregon, and Washington cannot register, or the District of Columbia. Compared to how restricting even the top online casinos in the USA can be, this is quite a broad range of markets.

Note that attempting to play while residing in any of these regions is a breach of VipSlots casino terms and conditions.

A casino that offers you a glimpse into the world of Betsoft and Arrow’s Edge casino games and enjoys a range of bonuses along the way must be a great venue. And VipSlots truly is an entertaining casino. With its three kinds of Welcome Offers, regular daily bonuses, and VIP club, it’s a perfect place for US players.

Suppose you like using crypto, even better! The site supports Bitcoin both for deposits and withdrawals.

In terms of accessibility, you can play games at VipSlots online casino for real money on any device you like. Customer Support is always there as well, via phone and email. The address for support and toll-free phone numbers are listed at the top of this page.

Yes, VipSlots is a legitimate online gambling site. They are officially licensed in Curacao and operate across many countries in the world. To be frank, this is not the safest of licenses, but VipSlots has a largely positive reputation.

This casino boasts a fast and efficient customer service. You can reach it through the live chat feature on the site itself. Alternatively, players in North America can call the toll-free VipSlots phone number +1-833-380-0233. Lastly, you can contact the support team using email at [email protected]

VipSlots is owned by CyberRock Entertainment NV, an online gambling operator based and licensed in Curacao.

Can I Gamble with Crypto in VipSlots?

Yes, this casino site has limited support for crypto gambling. It accepts deposits in Bitcoin, Bitcoin Cash, and Litecoin. The betting and transaction limits for cryptos are based on their current exchange rate compared to USD.

VipSlots is a medium-sized online casino based in Curacao. It primarily attracts players in the US, Canada, and Australia who are looking to play slot games online.

Ready to Play at VipSlots Casino?

If we’re being honest, the competition in VipSlots’ target markets is not all that great. Again – US and Australian online gambling laws are quite restrictive. There is only a handful of casinos players from these regions can really play at.

The Wild Casino is a BetSoft-powered gambling site accepting players from the US and Canada. It has some similarities with VipSlots, such as a very similar game portfolio. The SuperSlots casino is another NA-facing online slot site, with plenty to offer for slot fans.

We would also say that Uptown Aces is another direct competitor. Although it accepts both Australian and US players, it has a somewhat dubious reputation.

BetUS is easily the largest brand in the restrictive US and AU markets. It’s a huge online casino compared to most of its direct competitors. In a way, BetUS is also the standard by which we compare other online casinos in Australia and the States.

SlotsCapital, however, is the most similar casino to VipSlots. Not only do they have the same target audience, but the focus on slot games is striking as well. The main differences are the different owners and different supporting software providers.