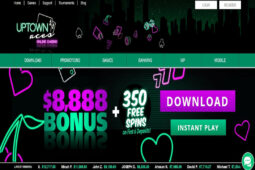 Uptown Aces casino is a popular RTG online casino catering to players worldwide. Its primary focus is on the USA, but the site accepts players from all parts of the world. Regardless of your country of residence, you can enjoy a vast number of casino games spanning slots, specialty, table games, and video poker categories. Unfortunately, the site does not offer a live casino service, given that Realtime Gaming has no live dealer tables.

Nevertheless, there’s much to do and experience at the Uptown Aces casino. The site offers the full suite of Realtime Gaming games, which currently consists of 170+ games. Slots, classic slots, video poker, and table games represent the crown jewels of its offer. If you are a fan of progressive jackpots, you can enjoy nearly a dozen of such releases right at the Uptown Aces casino lobby.

The Site is one of Deckmedia N.V. Casinos’ sites, a sister brand to Slots Capital, Red Stag, and Fair Go. If you are familiar with any of its sister brands, then you know how seriously Uptown Aces takes its job. You also probably know that online casinos in the United States are somewhat limited compared to, say, Europe. It never hurts to shop around and check the competition – which is what this Uptown Aces review is all about.

The site is not there only to deliver top-notch games and casino bonuses but also to protect its customers. Curacao licenses the casino, and it owns a TST certificate. Moreover, it uses RNG to ensure each number sequence is 100% random and safe and unpredictable.

Best Casinos explored every nook and cranny of Uptown Aces online casino before delivering this Uptown Aces casino review straight to your screens. Enjoy top casino bonuses, diverse gambling content, and more in this RTG-powered casino that’s perfect for casino players in the US.

Is It Reliable to Play at Uptown Aces Casino?

The fact that the Uptown Aces gambling license is not prominently displayed on the site is somewhat worrying. However, after some digging, we figured out that Uptown Aces is a licensed casino in Curacao.

Now, the Curacao remote gambling license is not the most highly-respected out there. In truth, this authority has been known to let standards slip, and horrible casinos occasionally manage to get one.

Thankfully, this is not the case with Uptown Aces. Operating since 2014, this US online casino has a spotless reputation. This is not a small achievement considering how heated things can get among users. However, even  Uptown Aces user reviews are quite positive about their experience. And if you know anything about online casino user reviews, it’s that even the best in the industry have issues keeping their scores in check.

Moreover, Uptown Aces is owned and run by Deckmedia N.V. We can easily say that this is one of the biggest online casino operators in the US with multiple large brands to their name. This fact alone brings a lot of credibility to this site.

Playing online casino games in the US in 2022 brings a lot of challenges, and finding a reputable casino is one of them. We are confident that Uptown Aces is a safe casino site to play, though.

In Which Countries Does Uptown Aces Operate?

Uptown Aces primarily attracts casino fans from the United States and from Australia. In practice, they accept players from all over the world and are not too picky about who can play. However, players from the EU or the UK frankly have much wider options in terms of sites, software providers, and so on. US and AU casinos have to skirt around severely restrictive online gambling laws, which is why they typically have a more limited offer.

Beyond that, the only restriction is that you have to be of legal gambling age in your legal jurisdiction. That’s 18 in most countries and US states, and 21 in a handful of states.

Uptown Aces casino, as an RTG-powered casino, is a great place to visit if you like bonuses and promotions. Its lobby is flowing with RTG games, some of which grace the very top of various international charts.

Beside chart-topping games, there are also various other surprises to explore. The Curacao-licensed site is there to accommodate your every wish and desire. Contact Customer Support if you encounter any issues.

What is Uptown Aces?

Uptown Aces is a US-friendly online casino site powered by Realtime Gaming software. It’s a part of the Deckmedia cluster of gambling sites, which are among the biggest in the highly regulated Australian and US online gambling market

For the most part, Uptown Aces is a trustworthy online casino for players from the United States and Australia. Although its Curacao online gambling license is not held in high regard, the site has a respectable history and plenty of satisfied customers.

No, but the option is available. Uptown Aces follows a long-forgotten tradition when online casinos had to be downloaded before you can play. This is no longer the case, and all the site has to offer can be accessed straight from your internet browser. If you still want to download Uptown Aes you can do so, but there’s no real advantage.

You can contact this casino’s customer support in several ways. The quickest option is through the live chat feature, found in the Contact section of the site. You can also reach them through the Uptown Aces contact email at [email protected]

Simply click the big ‘Register Now’ button at the top of the page to begin the process. You will be asked to provide personal and account information. Fill out the boxes and follow the instructions to complete Uptown Aces registration. Note that you will also need to perform KYC verification before you can withdraw any money.

We already mentioned that Deckmedia N.V is a fairly big operator. However, Uptown Aces casts a much wider net in terms of available markets and regions. We’re guessing that it comes down to the fact that Realtime Gaming is a fairly huge software provider that operates across the globe.

Black Diamond Casino comes to mind, though its chief markets are Canada and Australia.

Red Stag and Miami Club are also run by Deckmedia. To be frank, Uptown Aces is certainly a better option than Miami Club in terms of both games and payment options. Red Stag, on the other hand, is more or less equal. The choice between the two comes down to whether you prefer WGS or RTG software.

Casino Max is another online casino operating in the US and Australia with RTG software. It’s likely Red Stag’s main competitor alongside large brands such as BetUS.